Home > Features > In Their Own Words > F. Douglas Brown's “How to Tell My Dad that I Kissed a Man”

F. Douglas Brown's “How to Tell My Dad that I Kissed a Man” 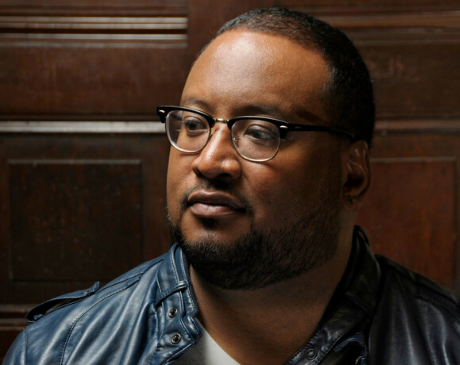 How to Tell My Dad that I Kissed a Man

Blame your drag queen roommate—Lamar by day, Mahogany
by night—and then blame his sequined dresses—all slit high, up to his balls

Tell him no tongue but his mouth—wax-like and wet

Tell him sweat and sweat

Tell him the juice—yeah saffron juice

Tell him anything you want—then tell him

You did it again

F. Douglas Brown melts my heart. In his debut collection of poems Zero to Three Brown examines the nuclear family unit, as very few people can. Brown reflects upon the self with a meticulousness and brutality, which is often reserved for others. "I ruined the laughter / Of waves and water. Ruined an entire pitcher of fun because I hit you." The narrator of these poems is so vulnerable, is so honest, and trustworthy. The narrator moves us, from the introspective self, to the child-self, to the father-self, to the self (as situated in contemporary America, contemplating the unnecessary death of Trayvon Martin). "O nonexistence. O immortality that uproots a nation. O / changing perception." F. Douglas Brown has birthed a complex and unrelenting narrator in these poems. Zero to Three is the father, son, brother you yearn to see at the family gathering.

F. Douglas Brown on "How to Tell My Dad that I Kissed a Man"

I have learned so many times in my life that no one is beyond reproach. This was true at the 2010 Cave Canem Retreat where this poem was written, approximately a year after my father's death. After the first workshop, I was called out by friend and poet, Aricka Foreman, because I was avoiding "going there," or "going deep enough," or going to any other place that poets and poetry had taught me to seek when writing a poem. In other words, she knew I had not written a word about his death, and that I was avoiding the subject all together. Sometimes a poet and a poem need a kick in the ass. And so, that night I wrote a poem recounting the last week of my father's life. It was difficult. It was painful, but it was what I needed to reach into myself and release the dogs of language I kept caged that year.

I mention this because if it had not been for this swift grace, I would have never taken the risk to write "How to Tell My Dad that I Kissed a Man." But swift kicks and grace come in all dimensions when at Cave Canem. After three emotional writing days for everyone, and three more "father" poems from me, Mahogany Browne sensed we all could use a break, and hosted an Erotic Poetry evening. I needed a poem in a few hours, so risk was now altering my process, and taking me back to my affectionate father. My father was an extremely loving person. He loved people and had pictures of all his many friends taped and stapled to his walls. He was happiest when amongst his folks. All of this made me realize how completely I loved this man, and miss him. Even as I write this, I long to hold my father's hand or touch his face.

So "How to Tell My Father..." starts with the kind of wanting that acknowledges desire—the kind that presence offers and absence hungers for. As a heterosexual male, I acknowledge this intimacy between two men manifesting. Like the poems of Terrance Hayes, Li-Young Lee, Marcus Wicker, Geffrey Davis, intimacy between two men can be rendered in the simplest way on the page. For me, that often forms poems centered on a father/son relationship. However for this instance, nothing can be simpler than when one kisses another for the first time. "Give a man a minute," and a perfect storm of ass kicking, and an erotic event, and memory, and emotion, and these might lead back to the unexpected.

The poem is an imagined confession to my father. It is me figuring a way to say that which was not said or shared while he lived. It begins with an excuse, an ashamed persona caught in the act of something "bad," as if in need of explanation. It blames Lamar, my actual roommate in Spain, but it is a harmless finger pointing. The beginning lines should express an "I-got-this" tone, as if Lamar says, "Go ahead and blame me! I can take it!" Here is the reality: Lamar was always to my rescue; Lamar, funny and never giving a fuck. This bold sass jumpstarts the recollection, and gives the poem a directional marker that will not apologize for a heterosexual desiring, hungering, or craving the same body. Blame turns to acceptance, then turns to a reveling of happenings, which speeds into a hypnotic dance of delights, culminating with a slight, ever so slight, stolen moment. The pace of the poem builds with images, and then only hints, one word stutters. The poem wants to move all the energy of what brought you to this person to a dizzying frenzy, only to put you breath to breath. Like any first kiss, this moment the poem brings you to wants the reader to forget all that happened prior, all sense and logic, gone. "Give a man a minute," and here you are, lip to lip with the most wonderful human being that ever existed. Defy all that you know about sexuality, family rules, pedigree. Forget all that, and kiss them again.