Home > Features > In Their Own Words > Jack Jung on Yi Sang 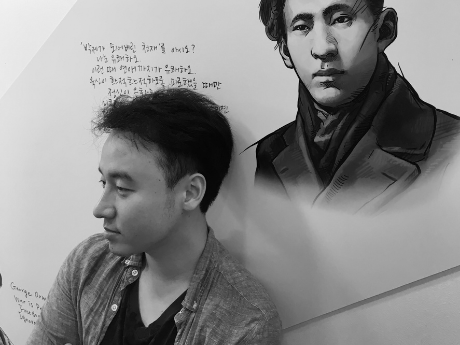 Translated from the Korean by Jack Jung.


"Flowering Tree / 꽃나무" from Selected Works (Wave, 2020). Copyright © 2020. Reprinted with the permission of the translator and publisher.

This year’s equinox, September 23rd, was also the 110th birthday of Yi Sang (1910-1937): the dark wizard, clown, and crown prince of modern Korean literature. Some still believe that his writings were the writings of a madman. Others think he was the greatest writer of his generation, if not of all Korean literature. No one denies his radicality, and Korean literature has not been the same since his meteoric passage.

Even though Yi Sang lived and wrote in a time and place vastly different from where I am, his evocations of a broken world and a soul struggling for freedom and beauty gave me clear reflections of my own heart’s fires. Long before I decided to translate him, the poem that made me fall in love with Yi Sang was his “Kkotnamu (꽃나무).” “Flowering Tree” in English.

This poem was the very first Korean poem of Yi Sang that was published. Eager to present his work to the public, in 1933 Yi Sang visited Korean poet Jung Jiyong with his manuscript. Jiyong was considered the foremost lyric poet of colonial Korea at the time, and when he read Yi Sang’s “Flowering Tree” and other pieces, he apparently looked up at Yi Sang and said, “How weird!” Then, he immediately published Yi Sang’s poems on the next issue of a magazine he edited. When an editorial assistant protested to Jiyong that this weird writing cannot be considered poetry, Jiyong is said to have replied, “It’s fine. Our country needs at least one person who writes such weird poems.”

Korea in 1930s was a colonized nation suffering under the Japanese imperial regime. Its poets and writers were constantly censored, jailed, tortured, and disappeared. Yi Sang came barreling into this scene with his surreal, confessional, experimental, and secretly political poems. The conditions of Yi Sang’s time are particular but not so long gone, and his language echoes with a ring of truth in our present moment, in both private and public spheres. In English, Joyelle McSweeney writes about her encounter with Yi Sang’s Flowering Tree:

There is not much more I can say that is not already captured in Joyelle’s words, other than perhaps to say somethings about how I translated this poem.

From the original, I translated the phrase “kŏsch'ŏlŏm (것처럼)” into English as “as if.” “As if” signifies the tree’s inner state (“as if thinking”) that motivates it to imitate an idea of a flowering tree. In the Korean original, all this motivation and thinking is connected to “yŏlsim (열심 熱心),” a word that I translated as “burning heart.” Yŏlsim is a case of hanja, like kanji in Japanese, where Literary Chinese characters are used as Korean vocabulary, and hanja words have implications in both meaning and imagery. Here, the characters that make up the word yŏlsim are “hot/heated/burning (熱),” pronounced yŏl, and “heart/mind (心),” pronounced sim. Together, yŏlsim customarily denotes passion, ardor, and other synonymous intense feelings. The word is most used when someone says that they will try or do their best.

What is strange about how Yi Sang uses this word is the unlikely grammatical ending he attaches to it. Usually, the ending “-hi” (-히) is attached to the word “yŏlsim,” which makes it an adverb: yŏlsimhi (열심히). But, Yi Sang uses the ending “-ŭlo” (-으로) instead, making it yŏlsimŭlo (열심으로). This declension turns any word it modifies into an adverb and makes that modified word the reason or the cause of other actions within the sentence. So, even though “yŏlsim” is almost always used as part of an adverbial phrase that describes emotional states, Yi Sang’s play with Korean grammar turns it into a conceptual noun that acts as the source of the flowering tree’s performance that defines its being. That is why, instead of translating it as “the flower tree is passionately flowering,” I went with “blossoming with a burning heart.”

When Yi Sang’s speaker says that fleeing “for the sake of a flower tree” was a “weird mimicry,” the speaker does not mean that he imitated how a tree blossomed for the sake of another flowering tree. The speaker is saying that he is imitating the tree’s “burning heart.”

The tree flowering “with a burning heart” (yŏlsimŭlo) is the only thing that the speaker sees, and “as if thinking of another flowering tree burns its heart” is the hypothesis the speaker makes to explain what he has seen. The speaker is thus suggesting that his fleeing is a “weird mimicry” of “burning heart,” and not the blossoming that this “burning heart” yields. The poem abruptly ends in this intensely heightened emotional state without any way for us readers to relieve the energy that we have accumulated from the experience.

That sensation for me is why I keep returning to Yi Sang—his words summon something from deep within me to clearly relive my unexpressed desires, and this in turn makes me want to live and flee wildly for their sake. His words ignite. Yi Sang expressed this vision of beauty during one of the darkest periods of Korean history. And he did all this as he was dying from tuberculosis. In our difficult time, I keep learning more from him than I ever did before. Yi Sang: Selected Works from Wave Books brings together his most essential works from variety of genres. Like his flowering tree that doubled in burning heart, I hope that this volume of translations will be a chance for new readers to encounter and explore their doubles in its pages.