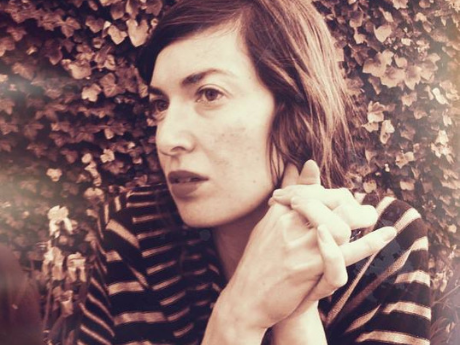 A dedication in the microphone: fury of velveteen
that was 18 years ago
You only feel invincible twice in your life

Primordial fronds with 3D daffodils in the dreamscape
chase large rodents into the ghost forest:

a hammer eliminates the need for help?

Help remember      calm me down to remember

Anyone is anyone else because      deep down
they have a face?

Dab a little water without disease

It's exhausting      everyone asking to feel alive!

That log is not a bridge when the mud dries

Somewhere I am a goldenchild
where I speak for the poem

Now beat      back against what you made

From Collateral Light (Brooklyn Arts Press, 2013). All rights reserved. Reprinted with the permission of the author.

My childhood was built atop an apple orchard. Or rather, my childhood home was constructed on what used to be a former orchard. A single crab apple tree in our backyard remains. My friend Katie and I (both of us six years old) were digging in the backyard when we discovered a buried trash heap that must have been quite old. Tins with cursive logos of companies that no longer existed; opaque and imperfectly blown thick glass bottles. I.e. treasure. We spent days secretly digging and sorting through the rubble, carefully selecting the "valuable" items from those broken or "too boring" to save, storing them in an egg crate.

Finally, we showed my mother, who was impressed but also concerned that we were playing with broken glass and rusty metals. While most parents would have immediately stopped their children from mucking around in dangerous garbage, my mother understood our glee and wonder. She gave us rubber gloves and boots and sent us back out. I remember understanding that she was being generous—allowing us discoveries despite the risk of scrapes—but I also remember feeling that despite logic, I knew nothing could harm us on this adventure. I couldn't explain it. It was a feeling of illogical certainty. It was certainty and it felt (deceptively) invincible. We didn't need the gloves or boots.

My poems are not narrative in the traditional sense. There is not an identifiable plot. The story of treasure-seeking children has been pared down to a single, first line of the poem above. But I hope an emotional and philosophical arc can be detected. Like this one, many poems in Collateral Light are constructed by distilling memories to their emotional origins to help the private self connect with and reach out to others. Composed of image-heavy poems, this collection centers on the creativity of memory as well as the anxiety of forgetfulness. It explores how these elements play into identity formation, emotional resonances, and the ways we can translate and convey subjective experiences. Here are a few persistent threads in the poem:

Thread #1: Glimpses of distilled memories that carry certain emotions. I want to give the reader the feeling of the memory minus the weight of the entire story. I want to render its original context unnecessary, to create new context, to appropriate, consume, wrestle, recombine. For instance, "I spelled my name in mud & sold it at a lemonade stand." As a kid, I actually sold food-shaped mud (mud hot dogs and hamburgers, mostly) and mud alphabet letters at a stand. I did not make much money, although overhead was low.

Thread #2: The anxiety of losing memory, of having formative experiences dissolve, swing out of reach. As though, at the end of a hard day of hiking, you turn around to find that the trail you knew you had bivouacked has vanished. That is the "fevered whiteness," I think.

Thread #3: Anxiety is not a feeling. It actually gets in the way of feeling. It pushes us out of the present moment. It allows us to absorb less. To take in less. So, how to battle this?

Thread #4: This poem ends with "Now beat back against what you made." In a sense, what is the point of anxiety if ultimately, the aim is not to develop static certainty but doubt? I both advocate for and struggle to live in a constant state of revision.

Most of my poems don't start with a specific departure point. They begin with a strange image I want to tie to an emotional field or with an emotional field for which I want to create an imagistic trajectory. I think this poem explores how to let go of certain sharp angles of childhood as well as how to let go of the anxiety in losing this imagistic and emotional reservoir. Then, to aim the reader toward a new river of doubt and uncertainty, whose bends and currents may be more unpredictable, but also more transformative.