Home > Features > In Their Own Words > Callie Garnett on “Macedonia Road” 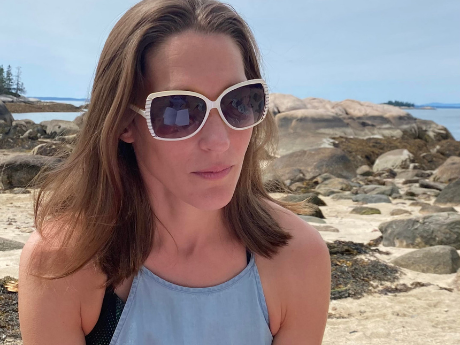 
I like music because I like sound
that makes me feel, said the Peloton instructor,
a former make-up artist, attentive to detail,
who knows not of me but pushed me hard
and never let me fall.

After,
as I crossed the grass, demented
from keeping time with my butt
I wondered, is it ok to just say to Jess
how much I love her energy?

What you drink / gets into your mouth / becomes saliva
You're alive
and all living drama takes place within a few vertical miles, totally scannable by the naked eye
except for tree frogs, which one rarely sees.

I took a long walk out country roads: down Reed where I’ve walked with Jess before,
turned onto Beale where the woods are thicker, had a little scare when a truck rolled by, unhurried.

It's a little confusing, isn't it, Jess (we can now acknowledge)?
To be a woman in her mid-thirties with a pretty cute ass
walking on the road alone at sundown
out of earshot — panic,
shame at the panic.

Some driveways have
a security system decal
screwed to a tree, one called CIA (the display is by subscription — you can just pay for the sign).

Anyway I turned around, walked back, turned onto Macedonia Road.

Suddenly bits of chat flew out of the quiet (first cocktails after months of isolation).
Don't go, said everyone ever.

I made out a small man in hot pink shirt and shorts yelling
Shut up
with real ire at a pair of geese.

Birds were singing on every tree.
Tanagers, mostly, lined up on the boughs as the sunset
yellowed them the MORE.
All nature seemed inclined for
the dimming wall before a rest, and

I thought of the 1972 bestseller,
The Secret Life of Plants, a work of dubious science beloved by poets,
where the flowers and tomatoes took lie detector tests,
admitted they were really sylphs
hoping to move out West.


From Wings in Time (Song Cave, 2021). Copyright © 2021 by Callie Garnett. Reprinted with the permission of the author and publisher.

I’ve been trying for years to write a poem called "Macedonia Road," because I love the title so much. I have made some attempts here and there, and then lost them. But it hadn’t occurred to me to actually compose while walking Macedonia Road, so when I found myself doing just that, thinking about Jess’s upcoming birthday, for which she had expressed a wish to hear us read poems, I felt the “occasion” of the TRUE "Macedonia Road" stir within me: to serenade Jess. I love an occasional poem. I like someone to talk to. And I like a durational poem. A good long meandering walk.

So for those and other reasons, the poem has a walking rhythm, but the subject doesn’t so much walk herself as find herself being walked, like the strange sensation of getting off a stationary bike after a hard pump. And that’s important to me. The long walk is not for inventing the poem from scratch. It’s for putting together the loose fragments and impulses that have been collecting, and testing them.

"Macedonia Road," the free-floating title that needed affixing. Fragments of the restless sundown song "Nova Scotia Farewell" ("birds were singing on every tree") and the chorus around me as "bits of chat flew out of the quiet (first cocktails after months of isolation)." It all fell in line behind this opening: “I like music because I like sound / that makes me feel, said the Peloton instructor." She really did. (Someone in my “bubble” during quarantine had a Peloton, and I tried it.) She also told us a bit about her background, inspiring trust: "a former make-up artist, attentive to detail, / who knows not of me but pushed me hard / and never let me fall." It would be impossible to fall off the Peloton bike; you're “clipped in” — but that state, too, feels vulnerable, and the instructors push, with words, your physical limits while assuring you you’re in good hands. Exhortation — one of poetry’s uses — designed to stir spirits in time.

Anyway I loved this break: “I like music because I like sound / that makes me feel.” I knew Jess would too. I loved the subverted rhyme “fail” (after "detail") becoming “fall.” (I fell off my bike at the bottom of Macedonia Road in 2018 and fainted, later called Jess, dizzy, concussed.) The ass workout that is Peloton had me musing on asses in time. The rest is history.