Home > Features > In Their Own Words > Margaret Ray on “Reader, I Married Him”

Margaret Ray on “Reader, I Married Him” 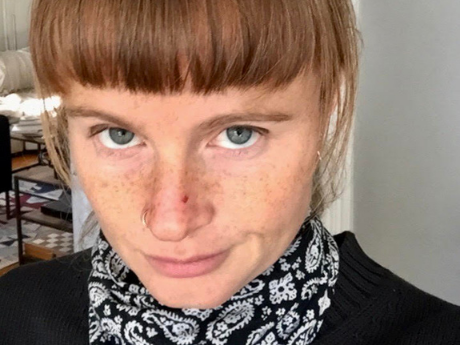 Reader, I Married Him

And the first one who thought I was pretty enough
to give him a blowjob in the parking lot after school.
And the one who still wanted me so bad he kept texting
in the middle of the night for months after I left.
And the one who punched walls, but never me.
And the one who slept around even after
I found out and was cool about it. And the one
who told me he was sure about me because
someone had given him the advice to look at the mother
to know what she’ll look like later. Reader,
I was done for for years, it was in the script
they handed me in high school. Where are my manners?
Your happiness makes me lonely, but sure,
stay and have something. A drink.
Some leftovers. My attention. I just have to take care
of something first, in the other room, a revision,
revise: I threw the book at him and slammed
the door on my way out. In a poem I can leave
when I should have. I’m off-book. I can make it
so I didn’t avert my eyes from all the signs, write myself
the blazing final speech, split her apart from me,
peel myself out of her skin and walk away.

Reprinted from Superstitions of the Mid-Atlantic (Poetry Society of America, 2022). All rights reserved.

On “Reader, I Married Him”

I’m sort of obsessed with all the scripts floating around us in everyday life…by which I mean, all the little moments in my day that feel written and handed to me and all I’m supposed to do is say my lines. Hi, how are you? Good! How are you? Most of these little scripts are innocuous or even helpful. It can be comforting to walk into a situation where the moves have been preordained, described for me and uploaded into my mind or carved in like the grooves on a record. These scripted moments often govern short interactions, and they can protect us from having to give too much of ourselves to an acquaintance (saying Fine! when we’re not). But of course long-play scripts are out there too, in which a whole storyline is sketched out for us to follow. Growing up as a shy “watcher”, a wannabe punk-adjacent kid in a punk town was an education in how to look for these scripts, but of course, to try to be anything with a label—like punk—is just to try to replace one script with another (see: the existence of the chain store Hot Topic in malls across America).

These longer scripts (start dating when you’re supposed to, get married to whoever you’re dating at a certain age) can be comforting, or they can become traps, especially if you can’t see that it was a script to begin with… The thing about a good actor with a script is that they can make each line sound like they’ve just thought of it. Maybe that’s the trick with marriage too—though I wouldn’t know—to see the script, but then to enter into it as if you’ve invented it yourselves.

This poem is thinking about what happened after I could see that I had ended up in a certain kind of relationship because of a script—and therefore it was possible to quit the show. What drove me to write the poem, though, was the impulse to phrase the poem’s initial list always in the positive, like a set of perverse accomplishments, to think about how this particular internalized script can school us to take ugly things as wins, to make excuse after excuse for people who don’t treat us well because we’ve internalized that we’re just supposed to be grateful for the attention.

The hardest thing for me is to feel compassion for my past self, to extend kindness to her when it’s so much easier to be angry with her for her inability to see, then, what I can see more clearly now. That wannabe punk is still in my head, shouting get off the conveyor belt, man! So this poem’s ending is wrestling with that anger at a past self, necessitating the peeling and splitting rather than something more gentle or forgiving.

I’m taking heart, these days, from what I can see in many of my students, which is that many young people are getting better at resisting absorbing at least this particular script that was all around me in my youth: that any male attention, even the kind that dehumanizes, is a win.