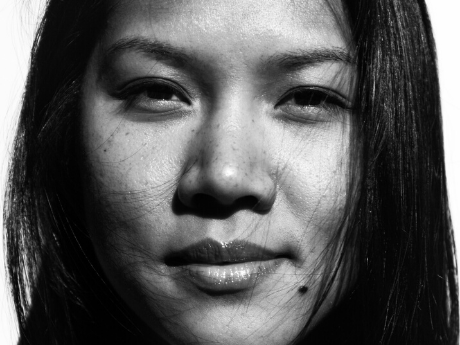 The French chef says, Try the foie gras, it’s very good.
So I treat myself to the liver of a force-fed goose.

Give it to me on a crostini with black currant!
In America, I don’t get to do this sort of rich-people thing.

The waiter tells me he was a translator for Angelina Jolie,
saw her roll up her skirt and walk into a river. Oh my gosh,

he says. She didn’t have to do that. Cars zoom across from me,
motorbikes too. Kicked-up dust coats my food,

my face. The family next door having dinner at their shop,
they wonder at me sitting so fancy on a restaurant patio

alone and if I’ll be okay, am I enjoying my foreign food
across from the bar where locals play pool. Actually,

they want to know if I’m Khmer or not.
My table covered in white, fine dining in Siem Reap.

Look at me get up when the waiter comes out with water,
I’m heading for the bathroom past the chef––Are you okay?

––vomiting on my shoes before I reach the toilet.
The steak is rare. Was it the pollution? Will you write a good review?

It was the foie gras, Pierre! Shut up!
I’d rather help an orphan-girl carrying her sister,

From A Nail the Evening Hangs On (Copper Canyon Press, 2020). Orginally published in The Georgia Review. All rights reserved.

On “Self-Portrait in Siem Reap”

I was alone on my last trip to Cambodia. The plan was to do research in Siem Reap, mainly in the Angkor Archaeological Park. I couldn’t help but notice the ways that the tourism industrial complex was thriving, especially on Pub Street where I would sometimes eat in the evenings after visiting temple sites.On “Self-Portrait in Siem Reap”

Almost every Cambodian I had come into contact with had asked me, Why are you traveling alone? Where is your family? They were concerned for me. In my broken Khmer, I couldn’t convey to them how I felt about my own independence as a woman or how often I’d traveled alone for work. The question got to me. Why am I alone? I’d ask myself and look around. The locals wondered if I had family in Cambodia. Yes, they’re in Phnom Penh, I answered. I’m visiting them in a week. I grew shy speaking in limited Khmer with people I didn’t know. Then I grew ashamed of not having visited my family first.

Everyday in Siem Reap, I spoiled myself with Khmer food. But one night, I chose a French restaurant to spend my American dollars. As I tried foie gras for the first time, it was clear that I did not like the taste of my colonizers. And even more, I did not like it in the home of my ancestors.

On another night, a nine-year-old Khmer girl followed me down Pub Street. She was carrying her sister on her back, and as I took out a few dollars, she pushed my hand away and asked instead if I could buy her powdered milk. She led me to an air-conditioned grocery store and pointed to a large container of formula on the shelf. It was $38. As soon as I paid the cashier, she thanked me and left in a hurry. Outside the store, I looked for her and her sister up and down the street. I spotted them eating corn next to a row of tuk tuks. I learned that she was in school but had to help her mother support the family. Later on, I told my friend Prakchhim about what had happened. He told me that it was likely that the girl didn’t ask for my money because I would’ve given her just a few small dollars. The powdered milk was something she could profit from, dividing the formula into small bags to sell.

I felt sick on the patio of the French restaurant. It wasn’t just the foie gras that made me vomit. It was tourism. It was the history of French colonialism in Cambodia. Foreign businesses taking over the city. The chef still asking me to write a good review. The beauty of Angelina Jolie alongside comments about my dark skin. All the Khmer words I had forgotten. Me without my family. My own diasporic American privilege and this history I could not process in one sitting.

Author photo by Nicholas A. Nichols.