Home > Features > In Their Own Words > NEW-GENERATION AFRICAN POETS (SABA) 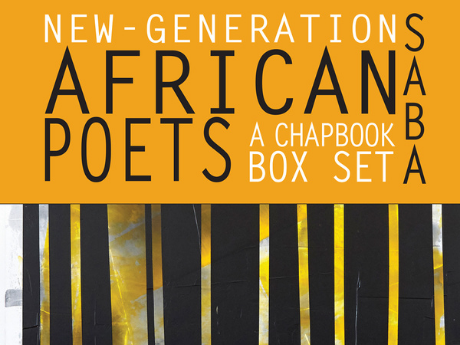 I will not be so bold as to make claims about directions and thematic trends in African poetry today because, after all, I come to this introduction not as someone who has attempted a deep scientific survey, but rather someone who, for the past decade, has been privileged to read a great deal of poetry written by emerging poets from Africa. And what I can say is that, as with generations of poets before them, this current generation is contending with what can best be termed “modernity” in African culture. And whereas in the past, notions of migration, globalism, and cultural “clashes” were defined by communication that was less fluid, less accessible, and more expensive, the fact is that the superficial “borders” that separate our worlds are more porous because we are traveling more, and we are connecting across all sorts of forms of media in unprecedented ways.

In reading this year’s iteration of the New-Generation African Poets Chapbook Box Set, I kept being drawn back to the idea of border crossings, of movement, and, in many instances, of migration. Many other common threads of form and content emerge in this work, but I thought it would be fruitful to consider this core notion of movement—a phenomenon that Toni Morrison, in her long essay The Origin of Others (2017), declared to be the most dominant theme of the twenty-first century. These African poets are confirming this.

Prayer
by Jamila Osman
from A Girl Is a Sovereign State

My sister’s cat piles dead things at my feet.
Mice in my shoes, gray and stinking.
Their warm decay, a splendor.

I collect bird parts from the front stoop,
the litter box, the bottom of the stairs.
Soft blade of a beak, underside of a wing,
a paper thin feather.

Once:
a whole bird on the porch,
still slick from the cat’s wet mouth,
life pouring out of its body.
Already on its way to where
it is we go from here.

How easy to mistake
a symbol for a sign.

The fragment of the bird is not the bird
or even the memory of the bird.

The bird is a gone thing

flying beyond whatever door
my sister slipped through
while I looked the other way.

I have nothing to offer the God of this place.
A prayer pulls taut as rope between the thing
it asks for and the thing it cannot ask for.

what I mean is no one wants to believe
the garden is dying.

A Catalog of Praise
by Sadia Hassan
from Enumeration

Praise the coffeeshop one block up from the crib
and praise the black barista in purple with a newborn
and up at seven making white folks coffee.
Praise her sister’s bald head shining and liner
cut crisper than a mug
and praise the laugh skipping like a record
and the mug chipped
from the weak shelf of the start-up
that stole my two good years and praise
the two good years however they found me
sweet or unsweet.
And praise my daddy for calling me sweetness
and praise my daddy for pilfering sugar
and praise my daddy for refusing silence and praise my daddy
for edging my mother towards a gentle hello and good
on her for trusting I would return to the table and rise
from the bed—praise the bed, and these days, the table
set with tea and the one succulent I almost killed
leaning long-tongued towards me and not the sun.
And praise the viridescent and decaying
heavy. Praise the air between these lungs
and the funk between these pits.
Praise my name, Ya Allah,
praise my lips, hips, and eye sockets
for beholding another day.
Praise the days for keeping on coming.
Praise the good earth and the night terrors
and the wonders of a small cup of coffee and one
chocolate croissant.

The Condition
by Nadra Mabrouk
from Measurement of Holy

My Mother tells me
that God says
even if, even while,
the world ends around you,
earth tearing root by root,
even while the horses
stagger into holes,
neighing into the darkness,
filling their mouths
to the throat,
when the horn sounds off,
Israfil balancing his clouded
weight on a rock,
his lips cracking and gold,
even while you hear
the ghosts leaving the spines,
their hair longer than ever,
breaths coming out
in timed instruments,
even while the waters
seethe open,
bodies rolling to the shore.
If there is a seed
in your palm,
you must bend to the soil
and plant it.

On the TV, the faces of the three girls missing are a blur,
they’ve been gone for sixty days and a woman
shown rolling on the floor, wailing,
can only be one of the mothers.
The journalist, unsure about what to do next, kneels
beside her and pushes the microphone to her mouth.
Sometimes, in bringing out the news, throats must
be cut open where they’ve been shut for good.
“What would you like to say to the government?”
The woman is barely moving now, her eyes
caught dead on camera, a shallow sound, a loud emptiness.
Absence from the body is death
and a grieving mother is more at peace knowing
their child is dead than not knowing at all.
A half-eaten body is consolation.
A body returned by the mouth of the sea is consolation.
A body with parts missing is consolation.
We give everything as proof of death to replace
having to attend burials in our minds for the rest
of our lives—graveyards everywhere we look.

And that is fitting,
for tonight’s moon is leveled
into a perfect half.

Peace is not so much a presence
as an absence—
what is not there
can no longer touch you,
whether to harm or hold.

You’re through and so full of wind
even the leaves have left.

A student of mine once said
Father is like mountain.

She said Father again
and again in her language
but I couldn’t produce the sounds.

What is it to lose a father?
How can a mountain disappear?

First Offering
by Adedayo Adeyemi Agarau
from The Origin of Name

The priest and my mother’s faith are tender flowers.
I am a ground, a soil, a field blessed with dead birds.
I am a sinister wind in the east of this place.
My mother will rise to the empty window
and bless the road.
Everything nameless is as empty as a jar filled with silence,
as empty as the void upon the sea
on Sundays. I am seashells and coral,
wild winds brushing the bruises of its own knees.
My mother will fasten me into a prayer,
fasten me into the anguish boiling in her chest.
I am an empty room, a word in my ear
is as loud as the velocity of receding echoes.
I will someday turn into an open city
—a boy who finally knows that he is lost,
that he is this close to his grave,
or his grave is as empty as his mouth.
I will someday turn into a vase full of flowers.

But my mother says that the gods are waiting by the door.

Venus Fly Trap
by Nkateko Masinga
from Psalm for Chrysanthemums

I can count on twelve hands the men I have swallowed whole:
it’s a record. If you lined them up, I would be done in a minute

and ask for more. There is no name for what happened to me,
except that men came here and did not return to their homes.

On a Saturday, my doorbell rings and I am sprawled on my bed,
awaiting the inmate whose groans will outmatch my screams.

Amaechi is reported missing on Monday. Do you have a towel
I can use while I watch the news? I join the search party, sated

and confident my belly will not spit him out, feigning a frantic
spell. By noon I am licking my lips. The doorbell rings. Come in.

The PVC pipes are burst, from my condo I can see the water squirting out of the cracks. I know everything is cracked here, our roads, our laws, our schools—our lives. Everything is leaking just like the water squirts into the dirty gutter. The water becomes useless, these are not metaphors. The ground in Hohoe leaks water, the PVC pipes behind the Police HQ leak water—in Hohoe, water is scarce. If I do not fill my barrels on Monday, I’ll have no water, no water till Thursday & this isn’t a metaphor—Monday isn’t about the beginning of this country & Thursday isn’t how far we’ve come. Monday isn’t Kwame Nkrumah & Thursday isn’t Nana Addo. I know the pipes are burst, just like the police & their wives & husbands & kids, but who cares—who cares about this country where there is no God of accountability?

Gye in Akan
suggests an offering;

to have someone
at the receiving end,

to desire to let go,
completely,

which is Gyi
die, which sounds

someone cooks
a meal, palatable or not,

it to you in a clean bowl,
food that may turn

your intestines outside in
or clean your red

throat. You lick your lips
and thank your tongue.

But how do you take
God—Gye Nyame

—unless they mean to say
except for God.

Anew
by Fatima Camara
from YellowLine

The blackest thing was us, the red was everything else.
None of it was beautiful.

He told me I was the most beautiful thing. Every time.
I said yes, every time.

It hurt every time, how I said yes to survive.
For what? For something so out of body, I began to see spirits.

Spirits who didn’t know any better said baby, this how men are.
Some said the love is hard before it’s better.

But none of them got to see better.
And I could no longer take this conditioning.

I wanted a red that was as beautiful as he said I was.
Then made him a red that made me feel like the sunset.

Besides, he tried to make a ghost of me first.

These are the elaborate one-sided goodbyes.
The learning to accept tea from strangers.
The voiceless convergence of winds.

Escaping the lovers of plants,
tender, soft-hearted, soft-footed,
their lone walks in museums,
the whisperings among fossils.

Their dedication to water,
against sound.
The inhabitance of pale yellow.

The slowness of arrival. The always arriving.
The day, and its salt pillars.
And the sun, still water.