Home > Features > In Their Own Words > Nina Puro on “Prescription” 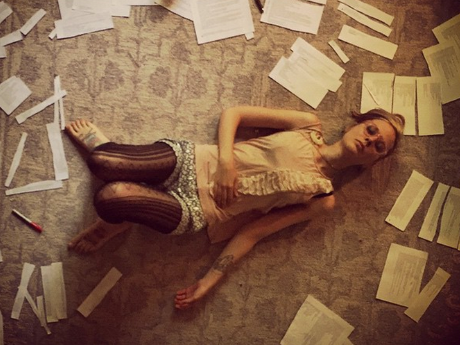 sizzling. If rupture, obsidian &
chickweed. If suture, sleep curled around

a pine tree. If surge, puddle of milk. If shadow,
puddle of gasoline. If gender, shadow hurtling
overhead. If gender, dream in a language

you don't know. If gender, swim
parallel to shore. If morning, sunspots

If language, cracked
branches. If ghost, funeral suit worn
thin at the knees. If rainstorm, core

& nuzzle. If caught out, folly
and muzzle. If walk, decade of
tiny crosshatches. If ruby glass, pick out

the stitches with your teeth.
If itch, reorganize the sky.
If itch, dropped stitch & chipped

From The Winter Palace (dancing girl press, 2015).  All rights reserved. Reprinted with the permission of the author.

For me, "writing" is mostly scowling at what'll be left on the threshing-room floor: failed attempts to smooth out the insurrection. It's not cathartic or even particularly pleasurable. When it's going well, the scraps are about to coalesce into comprehensible piles.

Sometimes—perhaps twice a year at most—a poem springs out fully-formed: that body-as-conduit extended fizzling frisson I've occasionally seen described elsewhere. It's my favorite sensation in the world—it makes all my gripes about poetry worth enduring—but impossible to incite or replicate.

"Prescription" sprung out almost fully formed on the R train in the final dregs of winter. I was cat-sitting for a poet in Kensington, reading a book borrowed from another poet I pet-sit for, and some combination of the motion of the train and the poem I was reading coalesced. I can't explain this, much less make it happen on command, but it has to do with negative capability—suspension of fear, belief, history, stability.

I can explain that right before this poem came, my non-poet brain was trying to work out something emotionally. I remember pacing on the platform at Jay Street, a particularly subterranean and confusing stop: abysmal signage, dripping walls, a sulfuric tang. I was trying to un-convince myself that the day was ruined, as I too often do: to tamp down an internal miasma, an infectious, bilious not-rightness spreading slowly. That afternoon, I don't think I could have named any emotions. I was, I think, deeply lonely.

A friend recently told me that a poem written while in motion "has something" on a poem not written while traveling. The back-and-forth does something comforting—iambs, heartbeats, rocking. I don't remember when I learned that I was the half that gets cut into, but my body knows. Proprioceptive lessons eclipse language. I am curious about whether one medium can both rupture and suture—particularly a medium based on language (which, obviously, is inherently the invention of the colonizer). For me, poetry has two main purposes. The first is to ask unanswered—perhaps unanswerable—questions. I mean this in the sense of relentless interrogation more than gentle curiosity.

The other function is curative—a tonic for conditions that are perhaps incurable. I'm curious about love and mourning in the abandoned bodies and spaces. Directive language is one way to world-build: poems as spells or self-created balms for conditions under which healing are not possible.

In the anthropocene, mourning is exponential. If everything one consumes or discards accelerates the death of one's progeny, how does one demonstrate love to the living?

Poems don't answer this question, but they create intimate spaces for it to sit.