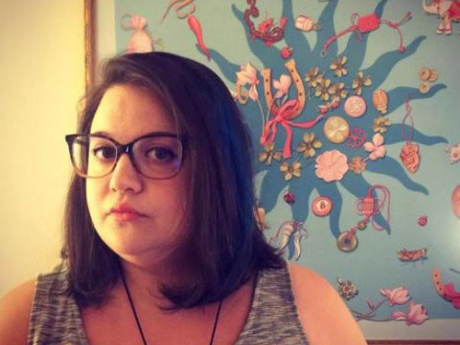 We are gliding             alongside each other in the North Atlantic ocean,
weightlessly                 propelling forward in the freezing water. I am
as immense as you,     reveling in the length and breadth of our imperfect
barnacled bodies,        giant as we are graceful. It's as if the entire sea
is a reverent                 procession for our massiveness. I am learning from you;
mimicking your            precise dorsal fin inflections, following your dive
instinctively,                 plunging effortlessly into blacker, colder depths and then
swimming back            towards the light. I hear a slow, deep beat, as if from
a huge hollow drum,   emanate from somewhere inside you—first a short one,
then a much longer     one—a haunted bellow I can feel in my bones: you
are telling me we         must breach before eating. Seamlessly we break the surface
of the water with-        out much splash, two parallel slivers of moon ascending
from beneath.              A rush of oxygen blasts our blood as we let air into our
lungs, filling us            with the energy we need to lunge headlong and fast into

the swarm of               glowing krill ahead of us. I watch you open your jaws to
nearly a 90° angle,      and I tilt my head back to do the same. My mouth splits
itself open like            a massive mollusk in preparation for the feed. I am
startled when              instead of teeth I feel long curtains of rough baleen
attached to my jaw.    We thrust into the luminous cloud of food, mouths agape,
sucking in every-        thing we can fit inside us, gallons of seawater and billions
of krill swishing          inside the cathedrals of our cheeks. Before I can allow
myself to swallow,      I purge the excess ocean back out of my mouth with my
tongue, trapping        only the desirable food in my baleen filter. There is such
implicit purpose in     this ritual. We the collosals, our hearts so big a person
could swim through   our arteries, thick walls of warm blubber padding
the enormity of our    bodies. Nothing as large as we are has ever lived in this
world. The power       of that immensity is an understanding between us, a quiet
knowledge that          our size is our life force, and with it we rule these seas.

From The Fat Sonnets (Argos Books, 2018). All rights reserved. Reprinted with the permission of the author.

On "Fat Dream with Blue Whale"

This poem, the penultimate in my book The Fat Sonnets, began as a sort of healing after a difficult day of being reminded by the world that I occupy too much space in it.

Most instances of being bullied or fat shamed are difficult to forget, innumerable as they are, and I very clearly remember the one that preceded the making of this poem. On the crosstown bus on my way to work, a man offered me his seat because he thought I was pregnant. I declined, holding back tears, but he insisted, loudly asking when I was due to give birth. I whispered, "I'm not pregnant, please stop asking me to sit down." He proceeded to get up anyway, saying, "Well, now there's plenty of space for you anyway. My mistake." I remained standing until the next stop, avoiding the stares of the passengers who'd overheard the exchange.

I'm so used incidents like this that most times, I can brush it off and continue on with my day. There are times I even have the courage to stand up for myself. But sometimes, when the world reveals its hatred of fat people just a little too explicitly, a little too publicly, I retreat. I withdraw into myself. I hide.

On those days, as a coping mechanism, I watch as many hours of Sir David Attenborough's various nature docuseries as possible. Something about his voice has always been very soothing to me—and I find immense solace in the animal world, which is devoid of the cruelties humans are capable of. That day I called out of work, came home, shut all my blinds, and put on the very first episode of one of my favorite BBC Earth series, Blue Planet. The second season had just been released, and I thought I could take up at least two days of hibernating and healing by rewatching the first season and then beginning the second.

The opening scene of the very first episode is footage of a blue whale. We see an aerial shot: the whale's back slowly revealing itself from the formless dark ocean, ascending for a breach. This movement seems effortless, graceful—almost like the whale is levitating. Attenborough says, "The biggest animal who has ever lived on our planet: the blue whale. . . far bigger than even the biggest dinosaur. It's tongue weighs as much as an elephant, its heart is the size of a car, and some of its blood vessels are so wide that you could swim down them."

I remember crying—a lot—hearing him say this, watching the whale's massive body. I tried to contextualize its hugeness within the vast expanse of open ocean in the shot, listening to Attenborough talk about its speed and agility. Something clicked for me about this power that was possible in largeness, when stigma and hate are absent. I coveted this feeling, trying to save it for the next time I had to face the world.

In the following weeks, I began doing extensive research on blue whales, almost as a way to stay close to that moment of comfort and empowerment. I read everything I could about their sheer enormity, their feeding habits, their capacity for emotion and connection. I watched as much footage as I could find.

I set out to write a poem in which I dreamed myself swimming alongside a blue whale, even sharing a meal with it. I tried to write myself into that state of grace and strength, to inhabit it. I imagined myself as the whale.

In The Fat Sonnets, there are a series of "Fat Dream" poems, all with a column of white space severing the lines: a divide between waking and dreaming, between the real self and the fantasized or feared self. I wrote "Fat Dream with Blue Whale" in the same format as the other "Fat Dreams," with that white space; but this time wrote a double sonnet, adding a stanza break. This poem was too big, too important—it needed the space to fold over and through itself in its moment of hard-won acceptance: to see itself both above and below the water.

I found hope there, swimming and eating with the blue whale, learning from it how to exist in my truest, most enormous form. I released a lot of anger and pain. In a way, I forgave myself for being fat; and I celebrated myself for just trying to survive, to do the best I knew how in a world that endeavored constantly to erase me, devalue me, despise me for who I am and the body I inhabit. In the ocean with the whales, my size was my greatest asset. I tried to stay in that world forever by writing this poem.