Home > Features > In Their Own Words > Shara McCallum on “Husband” 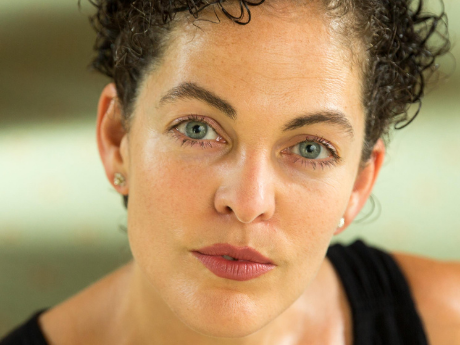 For all the faith in argument in principle in reason

for all the books you hand me bid me read

for all in the dark I pretend

for all the pursuit of equality of righteousness and good

for all the rights of man the vindication of woman

for all in the dark I pretend we are

for all the moral cause abolition the struggle for freedom

for all in the dark I pretend we are just

what would it mean to see

not Love not Truth not Beauty but who

has been in your house who sleeping in your bed?

"Husband" excerpted from No Ruined Stone by Shara McCallum, which will be published by Alice James Books in August 2021. Used with permission from the author and publisher

The question of this poem’s origins troubles the waters of memory, my own and our collective rendering of history. In telling a story, we are always reconstructing the past—putting back together what has happened before, as if the past were a body whose arms and legs have run away and can be made to return through the force of our recounting.

The speaker of this poem, Isabella, is one of the two primary characters in No Ruined Stone. In fashioning her voice, I asked myself what my need was, as a writer and person living in the 21st century, to return to our time someone who could have existed nearly two hundred years ago: a 19th century woman born into slavery, who escapes it by migrating from Jamaica to Scotland and passing for white.

In this poem, Isabella is addressing her husband, a Scotsman who does not know the truth of his wife’s ancestry. He fancies himself an ‘Enlightened’ man, but Isabella is not so sure how the beliefs people profess hold up when adhering to them would ask something tangible of their holder. The choice Isabella is weighing, here in this poem and throughout the book, is whether or not she can keep ‘passing’ and the cost of whatever decision she makes.

I have tried to run away from the trope of the ‘tragic mulatta’ for as long as I can remember, for at least since I became aware of its pervasive nature and that I, a black woman who looks white, have been scripted by that story whether I like it or not. Isabella is not me. She is a fiction. But Isabella is built partly out of my experiences. I conjured her from my emotional life, drawing on the repository of countless moments I have felt anxiety and sadness over how I see myself vs. how I am seen, felt shame and guilt at being able to ‘pass.’ She is also the product of my long engagement with a figure who crops up again and again in American literature, history, and culture. I grafted Isabella from all the narratives I’ve encountered that feature the ‘tragic mulatta,’ while aggressively trying to account for and revise the failings I felt in many of those stories.

In texts where she shows up, particularly in the 19th century and even well into the 20th, the ‘mulatta’ is hardly if ever a fully fleshed-out character and almost never the protagonist or agent of her own life. She is a plot device or rhetorical ploy—designed to foment sympathy in the minds of mainly white readers, to advance an argument against slavery and racism. She is a mouthpiece for someone else’s agenda, articulated through her body.

While working on this book, I asked myself many times why I was telling her story now. The best answer I came up with was that Isabella wanted to speak for herself and she let me know it. When I began No Ruined Stone, it was her voice I heard first, not that of famed 18th century Scottish poet Robert Burns, whose real life spurred my idea for the book’s speculative account of history and who also speaks in its pages.

At first and for some time, I did not know who the voice I kept hearing belonged to, but I followed the thread of it. In some measure, I wrote No Ruined Stone to give that voice, Isabella’s voice, habitation and to offer her a life. In so doing, I had to dwell inside of a narrative from the past that demanded I engage with questions we continue to ask in the present: about the lasting impact of slavery; the psychological condition of exile; the nature of inheritance and what we owe to the past; the nature of love and whether it is possible to ever truly and fully see another; the nature of identity and the ways we seem to endlessly mask and unmask ourselves across our lives.