Home > Features > In Their Own Words > Victoria Chang on “Obit” 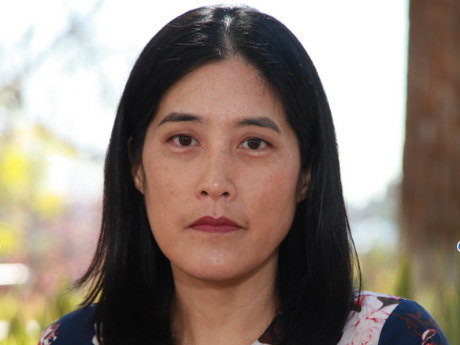 From Obit (Copper Canyon Press, 2020. All rights reserved. Reprinted with the permission of the author.

I have many memories of my mother’s teeth fizzing in a cup in the bathroom. I also remember my mother and her mouth sucked in and her funny talking when her teeth were soaking. When she died, there was the usual cleaning out of her things, deciding what to toss and what to keep. Since this task fell onto me and not my sister, I got first dibs on everything. So I kept my mother’s teeth. She must have had her main dentures in her mouth when she was cremated so this must have been an old pair or a spare.

I’ve learned so much about grief and myself since my mother’s death. Grieving in some ways, is a mirror or proxy of one’s personality. I learned that I preferred to grieve privately. Once, while in the garage alone, I opened the blue plastic container with my mother’s teeth in them. It was a strange experience, holding someone’s teeth in my hands. I, like my mother, have a strong nose. The teeth smelled like her. I sat in the garage, alone, sobbing from a smell I had never once considered before. A smell that was probably just Polident.

My understanding of grief before my mother died was very shallow. The ending of this poem addresses that shallowness—I couldn’t even get its grammar right. There was so much to learn, so much to try and distill. I also felt very alone through this process because I think, looking back on it, there were very few people around me who had experienced a parent dying. Even though my father is still alive, in my mind, the father I knew had died a decade ago from his stroke. But his vessel is still here. My mother’s death was an actual physical death. I suddenly felt that I could understand all the people who had had a parent die, but it’s not as if they were around or wanted to talk about it. Grieving is a very asynchronous process.

These series of roughly 70 OBITs that I wrote were my attempt to see if I could get to the bone of grief, to see if I could describe it, as if I were telling an imaginary friend about my grief, trying to explain it. Once I started trying, I realized how hard it was to explain and how it wasn’t even one thing I was trying to explain. Grief scatters. It’s like smoke, it gets in your hair, your clothes, everywhere, but you can’t touch it, and it never really goes away.