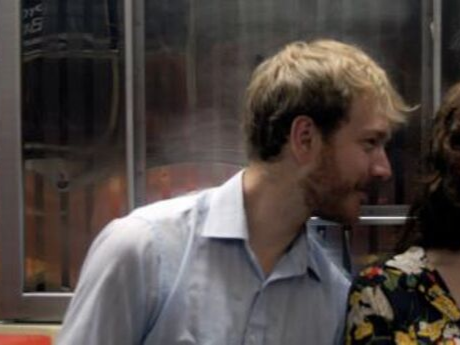 The Harmony of Overwhelming

Perhaps I exist to ruin
Objectivity, to dull
The shears that this insular

Art becomes, our proclivities
Mingling in the mangling
Street, since I moved to New York

I have not stopped
Sneezing, though I did pause
In writing this poem

To hunt down a fearsome
Silverfish, which undulatingly flew
Across the keys, even

Well known? The city is
Harmonious mass, an Amazon
Of commerce, even

If it is the harmony of overwhelming
And collective murder, I had expected to lose
My virginity to my babysitter

At the age of twelve, Breton
Wished to keep the book
Ajar, the song says I can't be held

Accountable for the things
That I've seen, but I refuse to
Deny the refuse

Of our lives the warmth
Of witness, I will not submit
Myself to loopholes

In recursion, the only phone
Call I got all
Day was a wrong

Number, yet that also
Has not stopped
Me from feeling a consequent

Note among many, kind
Words no less
Instructive and I'm off

To the zoo for distant salutations
To the wallaby I've dubbed
Bushwick Bill, also to look in

Along the ravine, all my
Life I've dreamt
I was able to see translucent

Of insects, this apparitional
Night, this soft, silly
Music that has become more

Meaningful than I could imagine.


From American Music (Copper Canyon Press, 2007) with the permission of the author. All rights reserved.

American Music is ostensibly a primer for what one shouldn't do at this stage in contemporary poetry. The tone is too effusive, the perspective too sexed, the references too low, the form too formal, and the content way too New York. What I wanted was to allow a particular consciousness, however fractured or perforated, to communicate something of its experience that exceeded the transactions of prose. This desire took, too put it broadly, an honest approach. For me, the direct way to access this level of honesty was to permit the variegated presences—everything I read, saw, and especially heard—to enter and transform the work, forging a motley chorus of sorts. In terms of its formal aims, I was interested in echoing the voice's unevenness with lines that always swerved past or stopped short of their predecessors, keeping things warbling and unstable.

The formal imbalance of those tercets, I think, led to the more conceptual framework of my second book, Becoming Weather, where disequilibrium becomes an unpredictable yet grounding force for the words. This book is composed of three long poems, the first of which actually began as a failed long American Music-style poem that I flayed into something wholly disparate. This process mirrored its conceptual conceit, which is to comment on how the body is forever subject to anatomizing forces that intend to still or abstract it into some semblance of balance. The second poem, "The Small Dance," endeavors to get the poem back on its feet and chart the resulting dynamics as it staggered around the page. The final poem, "This False Peace," uses a fractured version of prose as an indictment of the promises and uses of peace as an idea. The whole book, as far as I understand it, is an entreaty against balance or equilibrium or stillness. I am interested in forms that might actually conduct something of the body's inherent disequilibrium as it moves, unpredictably and obliquely, through the aforementioned flux of the world.

More recently, my concerns have been drifting around mistakes and songs. It is my small ambition to write the first major work of Mistake-ism, a genre proposed by Harmony Korine with his film Gummo. As for songs, I have been reading up on cavemen and neurobiology and continental philosophy, trying to discover something about the ontological necessity of song. My critical work on rap and the Aboriginal Australian tradition of Songlines has come in pretty handy on this front. I'm thinking of all my latest poems under the tentative heading of Hymns. As I see it, one of the duties a poet can undertake remains the endless enumeration of the universe. Though invention will always be a crucial aspect of poetic work, poets are also here to remind us of the marvel of existence, no matter how banal the territory of the poem gets. And, insofar as we are singing beings, it seems given to us to sing the universe back to itself. Like I always say, keep an open mouth.