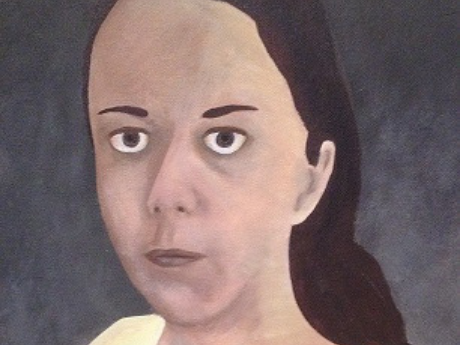 A Short History of Autoeroticism

I picture the forest but think of my swag.
The birds, metaphorically speaking,
disappear into the venom of the air.
The day is bounded by an asymptote
I think, but I hate myself, the air, the day,
and hate the birds most of all.
The notes of autumn's synthesizer
began to bother me in retrospect.
The winter drew its hexes on the wall.
There are no books to read or write
this afternoon, no poets who can compute
the ratio of obscurity to the sea.
Richard II invented the handkerchief
and he felt very small on that day
when he waved a red square
at a bigger, more ineradicable blue one.

Introduction to the work of Sara Nicholson
Joshua Edwards

The two facts I know about the life of The Living Method's author can be found on the final page of her book: she lives in Arkansas and she has had her portrait painted at least once. However, in reading her collection, I learned a good deal about Sara Nicholson's dazzling talents as a poet, as well as something about what is now possible in the art. The Living Method is a startling book, incredible for its haunts and music, as well as for its imaginative powers, and anything I can write about it will be dull in comparison, but like someone captivated by a phenomena on the horizon, I must say something.

The poems in Nicholson's collection, diverse as they are, are all intensely bold. Sure, they are often aphoristic and declamatory, but this is not the sort of boldness that I mean. I mean a boldness akin to that of Catullus and Dickinson. Like them, Nicholson makes the page into an eye that stares directly. How unsettling to have a voice with total conviction tell us that art is "the outer limits of the dark" and "Headstones offer us nothing / but an end to syntax." To ask "Who can afford to live in a city?" (And to offer a devastating answer which I'll leave to discovery.) How acutely and wonderfully our anxieties are expressed in such lines! And yet, nothing is overly reduced. The aphorist often traffics in the foibles of logic, but Nicholson's statements accrue in such a way as to undermine the assurances of knowing without undermining the will to speak. (I am reminded a Vonnegut quote along the lines of "Everything in the world will get unimaginably worse and never get better again, and if I'm lying to you, that is yet another cause for gloom.") That is, we can know something, but that knowledge is not going to save us from any greater threat. What seems most important in many of these poems is experience, or at least the desire for it. "For my birthday, I would like a river and one hundred creeks to swim in, though I'll settle for a voicemail or two," she writes. Elsewhere, "There are errors on the mountain / no painter could solve."

And then there are The Living Method's shifts in vocabulary and its control of prosody and sound. Without murdering to dissect, I'll simply make an example of the first seven lines of "Of Boxes":

As lidded eyes awake in us
there is no writing,
no flannel leaves to float
in the shelter of the epsilon.
Silent is my dress
as I drag it across the earth—
my collected works.

Like a mysterious map of the town where I live, handed to me by a stranger, this book has made me want to survey again what I thought I knew. (Contemporary American poetry? The human mind? Living?) I eagerly await more poems by Nicholson.


With A Hie Downe Downe A Downe-A
Sara Nicholson

When I die, I want my body turned into a harp. I got this idea from "The Twa Sisters," one of the Child ballads. It's a simple enough story—two sisters have the hots for the same guy, and the elder sister, out of jealousy I guess, drowns the younger one. A poet finds her body floating downriver, and he fashions a musical instrument from her corpse. From her breast-bone, he shapes the body of the instrument (sometimes a violin, other times a harp), and from her hair and veins, he gets his strings. When he plays the instrument, the girl's voice sings; she laments the cruelty of fortune and, in some versions, reveals the identity of her murderer. There is something beautiful, or beautifully necessary, for me, about the violence of this ballad. That out of poetry, can come justice. Out of the tragedy of metamorphosis, song. Mostly, I think that the "I" of my poems exists somewhere between the dead sister and the living instrument. I hope that this says something about the title of my book.

A good friend of mine, the poet and translator Michael Thomas Taren, says, "Writing is a way of being alone but it's also / being with oneself without loathing or deceit." Though I've never before felt the need to write a sentence that begins "poetry is," poetry is, for me, first of all, a method of self-preservation. A way of engaging with the fucked-up world while also keeping myself sane. But poetry's also a method of imposing order on the universe. And order, in poetry, means structure and prosody. Coleridge says that meter should feel like "wine during animated conversation"—that is, it should heighten the senses, focus your awareness, and make a little more bearable the fact that you're listening to another person speak. But it also drugs perception, creates a "medicated atmosphere." You don't notice how much wine you're drinking, and then poof, you're wasted. So, I hope The Living Method is, in the Coleridgean sense, a can of vintage Four Loko for the ear. I hope to drug you, if only to prove that it's my breast-bone, my hair, my veins you're hearing sing.