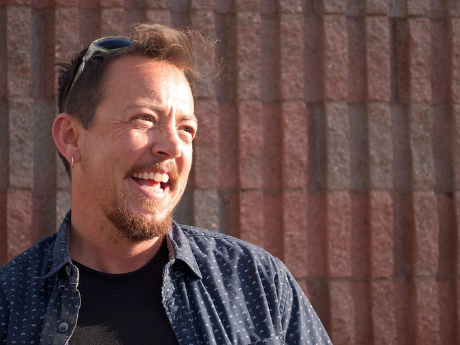 You said I will pull you out of my body in 237
ways. What you wanted was beautifully to
sever things. Here love: the same things. changed.

Finally: a taxonomy of afterthoughts. As though
you were the one who was
sleeping. Breathing in the marrow of would.

You, who are a valley of no, I hear the music leaking. (How she.
How she. How I.) You say low key and I do not believe you.
I forgive everything: the perseveration of skin.

Because if you leave, and you are already leaving, there are three.
But you say less than three. And the couch, in your absence,
is crenellated. And who is going to watch us as we leave.

To add to the list of changing things: life preservers are no longer
about preservation. They have become less holy. PFD =
personal flotation device. Endlessly possible. Unlike wood.

Stacey May Fowles wants a lover who will hit her.
(I do not believe in submission.) I want you to erase me.
This is a kindness. A kindness you tell me. A kindness I do not deserve.

(When my mother died, I will say.
Many years after my mother has died.
But I will not believe her. I'll be like my grandmother who

despite my parade of girlfriends and her profession
that nobody should be mean to them, still
doesn't believe in being queer.

I expect there will be a morning when you walk up to this very gate
while I am sitting here. I know this. I know you less each time I see you.
I know this like I know you are more lonely than glass.

Neuromuscular facilitation is just another way of saying
Vancouver. Always is yet a matter of roller derby. Just
in love with you. You, more than sleep.

Either way. It's a house. It's a house
like everyone else has. I take things away.
I don't take them for good.

And what if. I completely remember
it wrong. What if I remember there were two
of us. And then what if. there was only one death.

I do not believe in the existence of holes
that lead to nowhere. Muscle memory remains an enigma. Still, you cannot
touch her. You cannot touch her without not touching me.

(And still) you are not not a part of me. The world is
uncharacteristically unresponsive.
I could thank you. You stay with me. like grass.

Introduction to the work of TC Tolbert
Kerri Webster

The title of TC Tolbert's book, Gephyromania, speaks to a mania or passion for bridges, a startling reversal of the common phobia of walking or driving that long span across—of being suspended. Yet reading Tolbert's poems, the reader comes to understand that suspension is in fact the nature of embodiment, not just for the transitioning body, but for my body, and for yours. This is made true to a large extent by permeability, body/heart/mind endlessly functioning as receptor: "sometimes I believe I am a hallway," Tolbert tells us, and "I believe that witness is a magnitude of vulnerability," which is another way of saying that the seeing, feeling, breathing bodied self is an opening. Uncertainty, any good therapist would tell us, is at the heart of all anxiety; it's the What if that can shut the body down. But it can also, these poems attest, radicalize possibility.

The difference between fear and mania, then, becomes the difference between closing down and being open, between negation and transformation. "I go back to that no and I sing from it," Tolbert writes, and Gephyromania is testimony to both "the accidental bruising left by witness" and agentic morphology (word that means the story of forms, the study of living things, and the study of words): "Thank you for the joke about Tokyo," Tolbert says in "A Love Note for My Breasts," "I'm cutting you off now." "That the body which is my body is indeterminately" is perhaps at times frightening, but the indeterminacy is also the very thing that lets agency in.

In keeping with morphos and metamorphosis, the poems of the collection are formally varied, receptive to a wide multitude of registers, ambitious, searching: "I do not remember the words for that but I remember that there are words." The book encompass dicklets and Negative Capability, sonnet sequences and long-lined poems the reader tilts the book landscape to read as the poems disassemble and reassemble to mirror embodiment itself with an unflinching intimacy that draws us gratefully in:

I lost track of the differences between us. The woman I was in love with was leaving. I was beginning to transition away from visibly female to something the world would call "man." Who was disappearing? Who was showing up? Gephyromania was written between bodies – between who I loved and who was leaving, between who I was and who I would become.

For a long time I've been more interested in the form a poem takes than it's content. That might be an overstatement but it's at least true that I'm as interested in the form as I am the content. William Matthews said this great thing about subject matter – that we all write about the same 4 subjects anyway, so there isn't anything special about what – the only thing of interest is how. So, even though I have a trans and genderqueer narrative and some of these poems are explicitly about that, most are trying to work that out through form while talking about love. And maybe the body is just love made visible anyhow.

I see the page as a body and how I have used that body, or it has used me, for experimentation, silence, shape, music, rupture, image, etc. interests me. It is, undoubtedly, experiments in poetry and with language that led me to and into and through my transition - which is something I'm still in and probably will be forever – there is no endpoint, as far as I can tell, to the transitioning body – and so even what I'm writing today (9 years into my transition), I see as a formal representation of my gender. My question is always: how to get the body in the poem, how to find my body on the page.

My best writing happens outside with a notebook and a pen. Other than dismantling homophobia, transphobia, racism, and classism, I want my writing to be an experience of openness within restraint. Rather than generative, I often use limiting techniques. I wear a compression shirt in the shower. I give myself line limits and expectations so that I can break them. The dancer standing absolutely still during a 32 minute Trisha Brown dance piece in which other bodies are moving about the stage – this frozen body continually rearranges the space. Expansion within contraction.

The writing is the body :: the freedom is the constraint.

I'm thinking about silence and white space. I'm thinking about Mark Doty who says that Dickinson and Whitman are different poets in part b/c of the size of their lungs – literally how much breath they could take in and push out. At a time when I felt like I was leaking out everywhere, my breasts constantly spilling out of my shirt, my voice undermining any attempts to pass – I wrote territories of folding – and you can see how I was aching for silence – to be smaller and smaller (to have a smaller and smaller voice but, perhaps, to begin to learn to take up more space?) – and then to succumb to the page. And then take the sonnet crown. How I would vacillate between needing this expansive silence, white noise to swallow me whole, and then composing these tightly wound 3-5 page poems. How I needed the rigor, the dancing in a straight jacket of form. 7 sonnets back to back, the last line of one becoming the first line of the next until the last line of the poem curls back to the first line of the first sonnet – the form seems to evolve back into itself. I push out against that always while also willingly taking it on – so there is tension that interests me – the tension between holding and being held – sense and perhaps not sense – music and not music – the story of the thing and the embodiment of the thing and the thing itself and the hand.

Bridge: a musical interlude, a passage over, a joining, a contrast, a way across. That I would eventually either get back to who I thought I was or I would find a new face to which to return. It was a serendipitous time. I had no idea what I was doing. I picked up the reverse dictionary and found a listing for manias and phobias. Gephyromania literally means an addiction to or an obsession with bridges. There were months and years like this. I just kept writing it down.