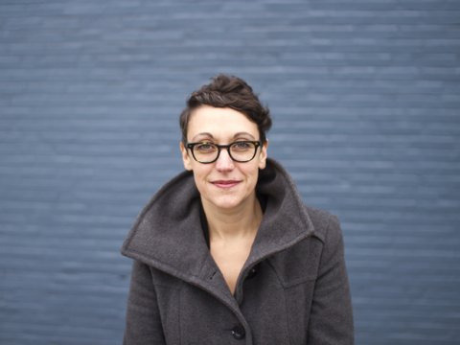 A Large Mirror Unloaded From a Truck in the Sun

Participation relegated to sleeping near
the open window. My great failure

has always been not imagining the future
but in managing myself. Your thumbprint, please,

before we launch the new rhetoric. I know
when I grovel I am plain. I've actually had a dream

about this building, and it feels soon enough to me now.
For all the reasons we are short of breath, approximate.

Passion clusters as though circumstance. A terrible
child, I grow apart. According to the original

rules, burn everything. Who could have anticipated
what we are becoming—in constraint, in circumspection.

I'll think of some experiment to move us,
focusing on the lenses learned.

Introduction to the work of Stefania Heim
Jennifer Kronovet

Have you ever said a brand new thought out loud just to see what would happen? At the dinner table? In the bedroom? In a foreign country on a train? Something that may or may not be right—said in your most definitive and trued voice, in a voice that could change everything? Throughout Stefania Heim's debut collection, A Table That Goes on for Miles, there are statements that feel as risky, as electrified with the potential to upset the carriage, to shift all frames of reference, to elide or explode distances. Under Heim's pen, inside her burning poems, statements are said into being believed.

"Only hunger is straight."
"It is not strong//to not want."
"The women's legs look better every year."
"The head is just an organ for borrowing."
"In all ugly rooms/all the people are sad."

Heim's propositions pierce through to the land of true in poems that are metaphysical and personal—personal in that they strip down and remake what it means to be a person, an I inside a we. In one poem, Heim writes:

I've siphoned everything
I possibly could

In the complicated, fertile, rugged fields of her poems, Heim exposes how to live in the act of seeing that is a kind of draining and replanting, the act of loosening familiar symbols from their ideas and using the parts to make new metaphors that mean more. We can live in the landscape of Heim's poetry as our most known versions of ourselves.

Heim's book is driven through with fascinating series that travel at the speed of thought and bring us along. One series is comprised of poems all entitled "Moving Picture." In these noir mini-movies, Heim eats genre up and uses the nutrients to illuminate the genre of human with all its cultural costumes, token phrases, and predictable predicaments dealt with in the most unpredictable of ways. In one "Moving Picture," the speaker deftly creates a character, "Her funny hopes, aristocratic…her true wit shines rich beneath her friends' romances." And then, after seeing this satisfyingly full figure, we are told to: "Break this Anne with Anne." Heim doesn't treasure her enticing constructions, but rather she hands us a hammer, shows us the work of being a person and then breaking out of character and into the cut fields of her language. These are movies I never knew I wished to see, and now feel like I can't see without.

Just as movies are a way through, so are dreams. Another series, which separates each of the book's sections, is made of poems entitled "The Dream Is About Us." These poems reenact a potent dream-logic that marries memory and feeling and culture to shine a light on a self recognizable and foreign at the same time. In one, statements stack and end here: "It is beautiful//to imagine inevitability. Dropped, meaning planted." In Heim's dreams, meanings of words coalesce because we think them to. We can hold concepts like stones. Here, in her constructed subconscious, meaning leaps, is everywhere interesting and proliferating and sometimes dangerous.

Alongside these dreams are works of art by Rachel Farbiarz that incorporate photographs and illustrations. The photographs capture kinetic moments from an old world, one of men in hats loafing, an elderly woman crouching to take a boy's hand, the town's frustrated beauty, and everywhere flowers that decorate, sexualize, and trip the townsfolk up. The images are constructed the way one's history is in Heim's poems: figures reach toward and away from a country and time left behind. Heim's poems reenact how the variegated and fragrant flowers of culture can form barriers that you might beautifully, dramatically tumble over as you run around in what you call your own life. Such falling jolts a new perspective into being.

"Each object suggests a symbol and then it undoes her," Heim writes. To love A Table That Goes on For Miles, is to love the feeling of being undone, unwrapped, undressed, unraveled away from symbol and into thing, a new kind of being. Sitting at this table, surrounded by old relatives, starlets, and murderers, to hit a "wave of nostalgia" is to actually almost drown. It is to see "Scars, everywhere," as "irresistible." To be that awake to and aroused by life. As her characters do, Heim is, "out and stalking realism." She writes, "I am most terrified when you shut the door of your voice." Luckily for us, Heim's voice is wide open.

For many years I have held and nurtured an image that I pretend comes from Federico Fellini's film 8 ½. In it, an impossibly long table, candle-lit and set for dinner, stretches across a grassy Italian clearing at dusk. Figures—some laughing uproariously, some weeping, some running and sloshing wine out from their glasses – converge around this table, appearing as if conjured from every direction in the now-descending darkness. Some of the figures are iconic: a clown, a nun, lovers, the movie director. But others begin to morph into a cast of characters that is much more personal: my own grandfather in his rakish youth; my stern, glass-eyed second-grade teacher. I hear faint music. And notice, suddenly, bright lights around the periphery, around the edges of the forest abutting the field in which this miles-long table extends.

Elegiaic and thick with longing, my scene is also tinged with humor, darkly absurd. In Fellini's art, I have always recognized my own conviction that our lives, and their significance, are constructed and construed through the weaving of actual pasts and histories with myths, dreams, fantasies, other people's visions, and the sometimes alarmingly autonomous fruits of our creative acts. I practice "seeing myself in the picture" until it catches. In my own childhood a real table outside in the Italian foothills where my mother grew up and where I would return during my childhood summers. Poor, rural south-central Italy: my farmer great grandmother leaning against a bale of hay while holding loosely to some twine garlanding a donkey. Like any child who feels, somehow, as if the famous TV actor is her uncle, when my mother told me I Vitelloni was the story of my grandparents, I assimilated it somberly. I filed it away.

In "The Poet," Ralph Waldo Emerson tells us that the "true poet" "will tell us how it was with him and all men will be the richer in his fortune." But how in the world does it work, I have always wondered. By what alchemy —or by what diligence—do we get from the combination of vision, thought, spark, impression, and effort that constitutes writing, to something that might mean to anyone outside of ourselves? How, at the same time, can we embody in our writing something of the beauty and terror of that gap —the gap between people, between ourselves and the world, between the real and the made up, between things and our words for them. These are the gaps poems have to cross, or maybe, more accurately, inhabit. Emily Dickinson talks about this as "fling[ing]" "Speech" into "God's ear."

Watching Fellini – this essay's stand-in for any moment of heightened seeing – I grasp at my feelings in order that I might think and see, with and through the encounter. I make in and of my poems a shimmering image not of one or the other—mine or someone else's, fiction or truth, life or myth—but of the interaction. The pieces come together, for a moment held still in their kaleidoscopic relations. My poems aspire to be temporary illuminations wrenched out of the ongoing messiness that is the condition of being.