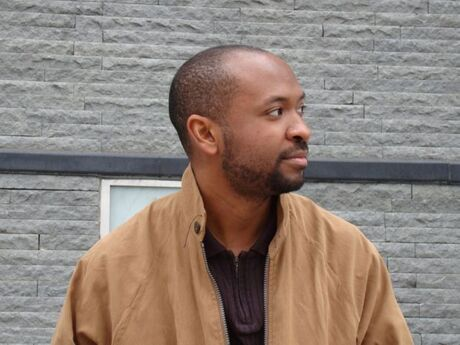 Out for amidnightflight, I see
two children on the playground—

the rust of blood crusting
over holes in their heads.

in the swings. "Mutie"
is scrawled across the cardboard

that hangs from their swollen necks,
the chains wrapped tight enough to tear.

I imagine what they did,
maybe the ability to turn glass into sand,

to hear rustled leaves as words,
something simple, something

humans kill for. I reach out,
close the girl's eyes, and suddenly

I want to rip every man out of his home,
make each one burn, reverse

the earth's rotation, rupture the core
and tear this planet inside out,

only so they can know how it feels.
It's been so long since I've taught people

how to fear, since I've razed their cities,
bent steel and split iron into handfuls

of dust, but someone must be
the villain for the dead.

From Missing You, Metropolis (Graywolf Press, 2010) with permission of the author.

An Introduction to the Work of Gary Jackson
Jennifer Chang

Reading Gary Jackson's Missing You, Metropolis returned me to my one experience with comic books: reading Archie in the sad cacophony of a music school waiting room, I'd pass the time rolling my eyes at Betty and Veronica, revering the easy indifference of Jughead, and wishing I were older so that I'd never have to take another piano lesson again. But, for Jackson, comic books are not merely a lifeline for weird kids; otherwise this would not be as good a book as it is. Comic books—their constellated mythologies and fantastical alter egos—evince human complexities, the difficult ugly truths about ourselves that we'd rather ignore, and they school the book's speaker in the bravery of connecting to others and, thus, to "the whole goddamn world."

It's no wonder, then, that the book's superhero isn't Captain America or the Amazing Spider-Man, but Stuart, the troubled young man with whom the speaker grew up and shared a comic book obsession. Born on the same day, at the same time, and "only a scream away," Stuart is a real-life alter ego, daring to pursue desires spectacular (making art, joining the Bloods) and mundane (dropping trou for a snapshot). Jackson expertly intersperses poems about Stuart with poems from his comic imaginary to create a motley universe of child's play, melancholic memories, and canny observations on impersonating men and superheroes. Stuart's story adds poignancy to the poet's pop cultural ekphrasis and transforms a book of poems into something of a Bildungsroman about two black kids growing up in Topeka, Kansas. We witness Stuart graduating from a lively yet fraught boyhood into one man's insoluble grief while, in adjoining poems, Magneto, that most militant of X-Men, discovers a little girl's lynched body and an ordinary man fantasizes about being for Wonder Woman the man "willing to stay home, and wait for her." These poems effervesce with the music of rage, seriocomic perspicacity, and sly social critique and reveal the shrewd study Jackson has made of comic books, capturing the scope of the epic in small vivid boxes of human song.

Still, it doesn't matter if you've never read a comic because his deft maneuvering between the inner lives of mutant superheroes and the "mutant" perspectives of the wayward and the Other works towards this poet's primary subject: time. Looking back on the past— recounting the losses of friends, family, and old selves—refracts a vision of our future and who we might become. And so Jackson describes a photograph of children as "Our bodies an ellipsis on the snow field: / leading us nowhere on a blank page." Missing You, Metropolis is a heartbreaking debut that leads not to nowhere but to the knowledge that how we embrace our childhood wonder determines how we arrive at adulthood. For Jackson, that wild route is as circular as it is circuitous, and his first collection suggests that, for his benefit and ours, he is a poet who will wander far and never grow old.

Sometimes I fear I entered the wrong profession; my memory is shit.

I forget books immediately after reading them. The same goes for most media: film, television, song lyrics all fall from memory after a few years, so I find myself re-watching, re-reading, re-listening to many texts. Sometimes I want to believe it's only exhaustion – my mind is simply a shallow vessel and experiences easily accumulate inside me, before spilling over, leaving a residue of language. More than one friend has insisted that this is a good thing. They tell me that it "frees up more space" in my mind. I don't think that's how it works, but I appreciate the sentiment.

It's more pervasive than text, too. I tend to forget people entirely; find myself re-meeting strangers who tell me that we've met before. When I revisit photographs of the places I've been, often everything looks unfamiliar. Even my life seems like a stranger's at times: my earliest, fully formed memory is from when I was six, or maybe seven. I lose the features of my grandmother's face. I've forgotten my mother's age, my sister's middle name, where I placed my own tattoo. It's a condition.

I write poetry to remember. The act of constructing a "machine made of words" is simultaneously an act of reconstructing memory: of trying to recreate a point of view that I once held so concretely, or preserving a memory I no longer trust to let go, for fear it will fade into the same bleed that I lose so many things to every day. Even now, there are moments I'm trying my damndest to hold onto: a slice of conversation, a surge of emotion, a news headline, a current event.

Inevitably, I fail. How could I succeed? How could I truly communicate my experience to you, when language can't fully do that work? Perhaps "you could say of me, / that I was truly / simpleminded." Yet I keep at it, hoping that something will resonate with you, with me, while words spill out of my hands. Here, hold this water. Perhaps it's foolish. Perhaps there is no worse failure than memory – than using language to preserve it. One day, maybe, I'll get it right.