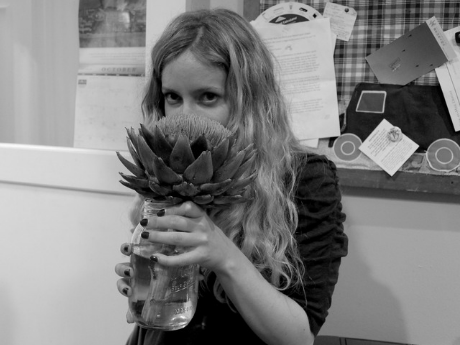 Introduction to the work of Jane Gregory
Amanda Nadelberg

How "the way your face is a desert I go / to" Jane Gregory's poems are a place I go to. In fact, I've been going there for a long time, and feel when visiting them, now, the presence of memory palaces that function like stirrups for a soul. Can you tell that I mean this in the most miraculous way possible? They are from the desert (if the desert knew how to walk and talk through a city). There is a wolf, some birds, an officer, as well as occasional (and startling) mentions of the internet. It is a world of prized imperatives constructing the natural manner, within a universe consumed by the nature of language.

It also seems to me like these poems have existed forever, found perhaps by an archeologist digging in the hot sun (but let us grace him with a chance tree for shade—the poor archeologist!) who then translated them from cuneiform and sent them to The Song Cave. But I've felt that way ever since I first read Jane's poems, five years ago, surprised that there was this ringing person who had written them, sitting at a table, next to me.

In this book she has written, there is the grave perspective of a voice who knows "some really real shit" and is able to admit that "This book tells the story of how things are getting worse at the parties. You see that things are getting worse at the parties where I am welcome. I am getting worse at my friends although I love them more than when I was better at them." My Enemies slays with its accurate honesty, the kind of honesty that has the foresight and generosity to also include for its readers the ten books that Jane is refusing to write.

Existing in imperatives—"Say stricken," "now spare it," "Imagine a fire now," "take this humming almost instead" "Be away but first be a desert"—this book is imbued with advice and familiarity, sometimes a bossiness, sometimes necessary haste. And what is an imperative but a trusting relationship between a You and an I? What better way is there to think of those two but as I think Jane does: often interchangeably, the generosity of a self, one able to slip onto another? A writer is a reader after all, and in no other book have I felt that consciousness made so clear, the singing of knowing, speaking as extension of listening. The movement is kaleidoscopic, historical, and also reminds me of this without absurdity but plainly, and with thorough cooperation as the poems of this brilliant book speak to each other.

In its spirited way My Enemies effortlessly instructs you to do many things, and in this way you are implicated, you have become a part of this book in a place you may or may not have known you needed to get to, and for this we thank the archaeologist. And Jane Gregory has written, "Go // into the arms of the wolf // imagining what the hunter thinks / the animal would be saying, could he speak // contained in the arms of the hunter." Please, go into the arms of this book that Jane Gregory has written. Wonder at "the maximum number of / things" and stunning versions it contains completely, all at once, of you.

Recently and belatedly, I was taught that if you want to insure contact will be made when you go to give and receive a high-five, you must look at the other person's elbow. I cannot write a statement that discloses my elbow, nor do I want to turn Celan's handshake ("I cannot see any basic difference between a handshake and a poem") into the very different and vertical gesture that is the high-five. A statement is accusatory, and as such is in competition with the poems themselves as the things that work to accuse— to accuse meaning to give things the substance of a charge, wanting maybe to mean to give things the charge of a substance. Duncan: "For I am not a literary scholar nor an historian, not a psychologist, a professor of comparative religions nor an occultist. I am a student of, I am searching out, a poetics." In My Enemies poems are provisional, are provided by an attending—at its root there is to stretch, strain, aim, hear—that betrays itself and is experienced as a diffuse intentionlessness near oblivion or some other lure. In an interview Agnes Martin described the difficult process of giving up on ideas and theories, of not having any herself and not believing anybody else's. Thinking and believing are relinquished simultaneously, so that, she says, "I have an empty mind, so when something comes into it you can see it," and then she says "that must be enough," and means that last statement to end the interview, for the disclosure of the nothing she thinks of to be sufficient, and it is; the interview ends there. There is a thing called the zero conditional and this isn't it: "If nothing happens it is possible / To make things happen." Neither is that, this: "when this vacuum, the poem, occurs, there is agitation on all sides to destroy it, to convert it into something." Neither is agitation incompatible with the taste of or for nothing. Nor is any of that all of what we're after—follow or seek—, tradecraft, all our problems turning off, palm to palm, a statement or book between them.