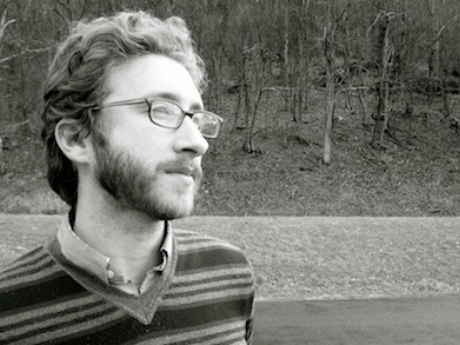 Somehow I am sturdier, more shore
than sea-spray as I thicken through
the bedroom door. I gleam of sickness.
You give me morning, Lord, as you
give earthquake to all architecture.
I can forget.
You put that sugar
in the melon's breath, and it is wet
with what you are. (I, too, ferment.)
You rub the hum and simple warmth
of summer from afar into the hips
of insects and of everything.
I can forget.
And like the sea,
one more machine without a memory,
I don't believe that you made me.

I don't believe that you made me
into this tremolo of hands,
this fever, this flat-footed dance
of tendons and the drapery

of skin along a skeleton.
I am that I am: a brittle
ribcage and the hummingbird
of breath that flickers in it.

Incrementally, I stand:
in me are eons and the cramp
of endless ancestry.

Introduction to the work of Malachi Black
Ilya Kaminsky

Malachi Black's Storm Toward Morning is one of the most accomplished debuts I have read in years. On the level of craft alone, Black's collection displays a skillfulness beyond that of a typical first book; its knowing mastery of language and poetic possibility is obvious on every page.

I love the driving music of Black's work, how the poet's voice is always "caterwauling / in a somersault of sound." And I love that within so much passion of sound, there is room in Black's poetics for an affecting but clear-eyed detachment:

But this is afternoon
and afternoon is not the time
to hunt you with the hot globe
of a human eye.
("Terce")

I love, too, its passionate inwardness:

I am that I am: a brittle
ribcage and the hummingbird
of breath that flickers in it.
("Prime")

And its compassionate attentiveness:

As if we could stop the clocks
simply by not talking. We can quarrel
but the time's still told: by pouty lips
formed in wrinkles on the foreheads
of the old men at the bus depot.
("Face to Face")

I also admire the musical fusion of emotion and directness in his work, as well as its abandon:

You will glare and I will go,
but you don't care and you can't know.
("Ode to the Sun")

I clop unevenly along the sidewalks,
crooked and vaguely caving in,
like some demented, avid mailman.
("Coming and Going")

Black's formal music is brimming with longing, with original voice, with active and intelligent mind, and yet it is willing to go bare, on the nerve, refusing to patronize:

Black's prayers and utterances are not mere gestures; rather, they come from that darkest hour when one descends into body, into illness, into insomnia, when one finds what Keats called "melodies unheard"—

And you've been on
this train too long to know the time: you're lost
between the meter and the desperate rhyme…
("Traveling by Train")

Malachi Black doesn't give us false salvations. He gives us music we can at once strive for and live with.

As a reader, I turn to poetry, above all, for companionship, and for all that true companionship implies: stimulation and provocation, insight and illumination, empathy and understanding, sympathy and consolation, delight and entertainment.

As a writer, I know that poems occasion themselves. But in almost every important sense, writing is a deeper kind of reading. Each is a form of listening.

Poetry begins in delight and ends in wisdom. So Robert Frost, one of the great American aphorists, has said. While there is an undeniable elegance in the virtuosic simplicity of Frost's remark—and a great sum of truth—I would have the statement somewhat revised.

Poetry begins in unrest. Of this much I am relatively certain: that agitation, however mild, is what activates the use of language, poetic and otherwise. Whether interrogative, exclamatory, imperative, or declarative, language arises not from a state of rest or perfect ease but from a sense of need. Silence is perfect equilibrium; as such, it is the absence of all poetry.

Yeats, I think, was oversimplifying (for rhetorical effect) when he famously distinguished between the poetically generative quarrels with himself and the rhetorically generative quarrels with others. In truth, poetry requires nothing more than conflict. Whether the conflict is with oneself, one's language, one's predecessors, one's peers, one's loved ones, one's God, or one's government is immaterial. Poems, after all, are songs for the speaking voice—and a certain extremity almost always attends an outburst of song.

A poem ends when it has answered itself, although it may have solved nothing.