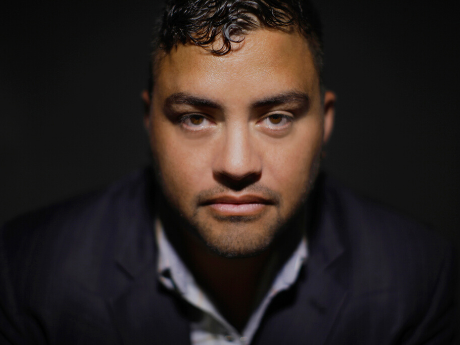 The enormous head and huge
bulbed knees, elongated
hands and feet, don't fit
with the filed down chest, limbs
of kindling, yet this is one
whole boy, suspended
in a cloth harness hooked
to what looks like a clock
stuck at three fifteen.
Closer, you can see it is
not a clock but a scale,
the kind you find in any North
American grocery,
but of course this is not
North America, this is
the Sahel famine, this
is Mali in 1985, where a boy
waiting for his rations
to be adjusted
must be weighed. At once
his face relays one and many
things: he could be crying out,
he could be grinning,
he could be frightened
or tired, he could believe
he is suspended in unending
dream. What starvation started
gravity refines as the boy
reclines, the hunger having
crumpled his neck, his face
staring up at the ceiling
of sticks which like most ceilings
anywhere in this world is blank.


Reprinted with permission with of the author. All rights reserved.

Introduction to the work of Shane Book
Thomas Sayers Ellis

There are many ways to discuss a book of poems as well as the individual poems themselves. The easy, taught way to do it is to discuss the collection in terms of its connection to or its exchange with literary history (which can also include any resemblance to a known literary style). The other, more focused way is to lift the themes from individual poems and toss them and their artifice against the fabric of contemporary reality and see what sticks. Either approach would reveal what a more than satisfying collection Shane Book's Ceiling of Sticks is, but the best way to discuss its merits is to examine it according to the various ways that Shane Book constructs the poetic line. The line governs the reader's eye-walk, the steps of his understanding. It is the clock of the poem's music and meaning, its time signature. It is also a poetic thumbprint in the same way that certain critics once believed vocabulary was (or wished it were) and it controls the "atmospheric conditions" (a term I am here borrowing from poet Ed Roberson but with a slightly different usage) of the poem and the behavior of the speaker in the same way setting controls everything (or used to) in fiction. Most importantly, the line (one syllabic-idea at a time) is the best indicator of poetic maturity and it's the essential thermometer by which one takes the poet's temperature for patience. You cannot be a poet if you or (your line) is in a hurry, and the dirty secret of Academic Poetry is that it does not respect anything that moves faster than it does, but Shame Book's mind does and it does so with intelligent, reflexive care. His fascinating sestina, "Santa Cruz" nearly outthinks the sculptural limitations of the form. Reading teaches patience and the most impressive thing about Shane Book's poetry is how the patience one learns from reading seems to haunt the way he inventively reinvents the poetic toolbox and thickens time. He doesn't rush to metaphor. He doesn't grocery-store-package simile. The integrity of the poems is never compromised by cleverness. In his very widescreen "To a Curl of Water" the images are woven so tightly into the narrative progression that they vanish into something so smooth that it is never philosophy or cinema but I do not dare to call it fact or "documentarian" either. A Book poem is an act of patient, poetic knowledge. The writing is not slow, nor hindered by easy layering or maze-like phrasing. He is never confusing and no, it is not an elderly poetics but how do you explain the inventive pulse of a poem like "The Lost Conquistador?" Twenty years ago this aspect of him would have been called "painterly" but that label does not fit and there is not a label for it but no young poet fragments patience like Book. He finds the little clock within the larger clock of the work every time; sometimes he does it by enlisting the service of the sentence and other times he does it by interrupting the sentence with fits of emotive intelligence. In either case (no matter the approach) Book keeps us close. This is intimate work. From the moment he chooses his subject-matter he seems to, simply, care more deeply about more things than most first-book poets. I wish I could say that along the way he has destroyed the sentence, that he is free of the sentence but (better yet) he uses it as a housing works to bend and move through, and these changing tempos add the gears of possibility to the bits and pieces that become his poems. I liked this book so much that I have tried to invent a way of writing about it that praises something in it other than what it is about. Ceiling of Sticks is about something great but the great thing that it's about is just one of the great things about it.

Poetically, I'm interested in the various, the many. Or, I'm devoted to negated space, an erased trace, the none. Lashed together these polarities make up a vast unboundedness, an inestimable infinite. This is the sweet inside pocket, that prized spiraled scent-residence I try as an artist to keep my nose in, skylarking.

That's why I throw my lot in with Mallarmé who writes "there must always be enigma in poetry" because he knows that herein lies poetry's muscle and abject weakness, thus poetry's only chance at truth. Another way of saying this is that poetry's power swings on an enigmatic hinge. This hinge, the place of the mysterious unnamable, is language's central characteristic—its precision and distance vectoring us even as it thinks us to stillness. The enigma at language's heart toils in an offshore outsourced factory of the infinite, sans papiers. I work the nightshift there and sometimes the day.

Undoubtedly my dual allegiance to both the numerous and the emptied owes something to a nomadic childhood. My growing up and education began in Peru, splaying off into Canada, Ghana and the United States, with numerous detours through Asia, Europe, and Latin America. Ours was a Black Trinidadian-White Canadian household—English spoken, French and any African language encouraged. Coming to adolescence in the developing world, amid famines, droughts and World Bank-mandated economic austerity programs, politics was not an abstract interest. Rule by coup d'état, the chess game of superpower-sponsored insurgencies, stalled relief efforts, were real life. Learning of the planet in this manner was glorious and terrifying.

My first book, Ceiling of Sticks, pays tribute to the numerous locales where I came of age. In the tradition of Charles Reznikoff's Testimony, the book employs a documentary poetics: part reportage, part song. My hope for the book was to expand Reznikoff's definition of an Objectivist poet as one "who is restricted to the testimony of a witness in a court of law;" here instead, the poems report from the twin courts of conscience and experience. I was moved to try to document the lives of those ignored, history's lost; these are the people with whom my loyalties lie.

Ceiling of Sticks took long to write because I had several manuscripts cooking simultaneously. Stylistically each manuscript seems to have been written by a different person. After Fernando Pessoa—who it seems to me was able to create not a body of work but a work of bodies, planetary clusters, a universe—I labor in many modes. My first saxophone teacher modeled this practice, exhorting me to play all kinds of music, not just Coltrane. On hearing my complaints about a difficult fingering he would ask, if you were a pianist would you play only the middle of the keyboard? Eventually, in this spirit, I fused poetry's keyboard to filmmaking. In this way I'd like to create at least a constellation that converses, architecturally, with the world's abundance and paucity. With Pessoa as one model, I hope to become an artist of the multiple.

For the most part Ceiling of Sticks speaks plainly. Subsequent poems spray further along the enigmatic hinge. The language falls weirder: serial poems announce themselves via a fissured multivocal consciousness, while other clusters big up the syntax and in a crimped sine wave shape, veer between raiding the visual, aural and linguistic modernist traditions and just chanting Babylon down.

At base all poetic aesthetic school turf battles are fought over how close to the enigma the poem adheres. Give me a poetry that sails under the flags of truth making and pleasure, however torturous the pleasures and strange the truths. For the poem exists as form without law, hovering in the doorway, a gifting regime of indeterminable component parts and unforeseeable, modular flames.