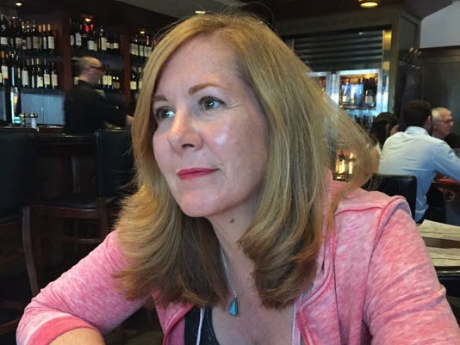 I suppose the most immediate way in which I think of myself an American poet is by way of our country's emphasis on the melting pot ideal. Even growing up off the radar in a relatively sleepy place, the cultural influences coming from many kinds of others deeply informed my point of view—from the surprisingly varied people in my neighborhood (blue-collar folks, wealthy doctors' families, American Indians, Asians, single moms, even a few transplanted Lithuanians), to the music I heard on the AM radio (from Hank Williams to Curtis Mayfield) to the TV programs I watched in the evenings ("Temporary layoffs! Good times!"). Trying on other peoples' cultural finery seems a typically American gesture to me.

I also believe American experience is divided into distinctly generational moments—that is, I don't think I have much in common with Baby Boomers even though I only missed their ongoing celebration by a few years. Contrary to some opinions I've heard, I think the late '70s were actually a wonderful time to grow up in America--the knee-jerk cynicism and corporate lock-down that have settled upon us now weren't nailed into place then—you had the strong sense that people were trying to engage and sort things out for themselves, politically, sexually, racially, etc. There were some keen lessons to be learned for a kid watching the grown ups' struggle to understand the new operating instructions the world suddenly seemed to require of them. I was part of the first generation of children bussed for school desegregation as well as having had government-subsidized housing built in my formerly middle-class neighborhood. So issues of poverty, race, feminism, gay rights and drug addiction, along with the beginnings of therapy-speech and 24/7 media culture—all of these were performed in front of me as a girl. While I think it was an especially conflicted time to come into social consciousness as an American, I really wouldn't change that experience. Because taken together, these cultural upheavals brought me into relationships with people brilliantly different from my own. I think many of the poets of my generation had similarly American childhoods and that in our poems you'll often find images, qualities of voice and other formal choices that grow out of that shared generational experience.

Do you believe there is anything specifically American about American poetry past and present? Is there American poetry in the sense that there is said to be American painting or American film? What role do historical and geographical factors play in American poetry and in your work specifically? What other aspects of your life (for instance: gender, sexual preference, class, ethnicity, religious beliefs) relate to your sense of being a poet in America?

Well, what might make American poetry specifically American is a question that's been fully addressed by people cannier than me. But my quick and dirty personal shorthand breaks it down into two categories: the legacy of the Wild Men (primarily Whitman, Pound and Williams) and that of The King's Men (see Eliot, The Kenyon/Fugitives/Lowell nexus and the recent flares of American neo formalism). It feels to me that the majority of American poets are still wrangling to find relevant ways to kick it through those two ever-looming goal posts.

But now I feel a little uncomfortable with the "we" I've stated here—as a writer who also happens to be a woman I've never felt completely at ease with or entirely welcomed on either team. Which is probably a blessing in the long run—there's no one more boring than a comfortable poet. And there's also a weird freedom in the feeling that the majority aren't watching you very closely. So I don't think I suffer the "anxiety of influence" in the way many of my male writer friends do. But to merge this with the next question— I didn't start to see the need to identify myself as a woman writer until others made it clear that they were seeing me as such. I think my anxieties as a young woman writer centered more on not wanting to be identified with another peculiarly American phenomenon—that of "confessional" poetry. It perplexes me that the American poetry community still needs to have so many conversations about the dated notion of the confessional. But to me the moniker in recent years has devolved into critical code for "therapeutic" or the seemingly undignified "personal" The phrase "confessional poetry" has been used well past its expiration date to describe and dismiss anything other than the critical establishment's approved modes of poetry, particularly poetry written by American women.

When done smartly, I enjoy and find valuable the play of pop culture images and forms in American poetry. It represents a big part of the world most of us live in. To paraphrase Rimbaud, poets must be of their own place and time.

I predict the 21st Century in American poetry will see women writers taking the places they have rightfully earned over the last century and the fullness of female experience will finally be fully appreciated and celebrated.