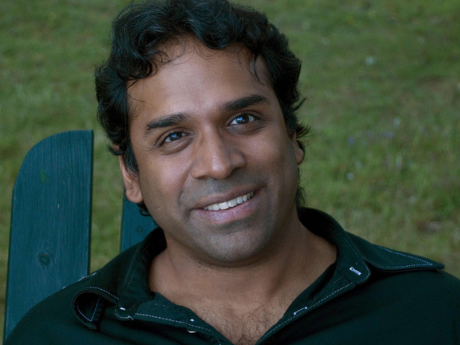 If America is the home-run and the skyscraper, hamburgers and the electric guitar, (it's not, else it's more or less), then its poetry need retain some element of longitude and latitude, some immensity of scale and the distraction of sport, cooked together with reconstituted flesh and amplified with feedback and volume. When I think of the great Modernist epics of the 20th century, from T.S. Eliot's "The Wasteland" to Hart Crane's "The Bridge," from William Carlos Williams' "Paterson" to Gertrude Stein's "Lifting Belly," it is all spangled with stars, remains striped and eagled onwards to Charles Olson's "Maximus Poems," John Ashbery's "Self-Portrait in a Convex Mirror," Kenneth Koch's "Impressions of Africa," Lyn Hejinian's "My Life," Vikram Seth's "The Golden Gate," Adrienne Rich's "Dark Fields of the Republic," Leslie Marmon Silko's "Storyteller," on and on, until a distinctly American ambition emerges, to attenuate and to facet the poem on a scale known only to the Thelonious Monks and Frank Lloyd Wrights of the world.

My own primary poetic oeuvre is reality, unconstrained by space let alone country, ranging from quark to mountaintop to supernova, and I see myself essentially as rootless, a citizen of the world, a postmodern nomad. But that's the facile answer, because my work gravitates of its own accord to the New York School, to the sped up and multifarious. Like Das Efx, I'm sharp as a thumbtack and friggity-freak the track for hand claps and toe taps. I'm not attuned to the molasses and mint julep pace of the Deep South or the zen pontification of the California coast. And while my mind turns like an astrolabe towards the ontological and the analytical, I've found myself defined more and more by the poems I've written that engage my first-generation Indian-ness. Whether I like it or not. In the common parlance, I'm ABCD, an American Born Confused Desi, someone whose very displacement is a source of parody. That hyphen (never my favorite punctuation mark since I'd rather squash words together à la Paul Celan) has come to float above my work like a ripped apart and hammered flat halo.

I hate the hyphen yet nonetheless I find it productive because it frames a community, allows me to draw from the richness of dual cultures and provides a substantively oppositional relationship towards poetics and self. I've attended poojas communed in Sanskrit, been regularly pulled out of lines in the airport, been treated as a guru by garden club retirees and been spoken to in Spanish, Arabic, Turkish and Urdu on the streets. Just in the last two years, I've been accused of being a foreign national and nearly refused entry in the country I was born in at the Douglas/Agua Prieta border crossing and I've been called a sand nigger, wrongfully arrested and held for the weekend at Central Booking by the NYPD for driving while brown. Therefore my work must be inflected by these experiences, even when I'd rather volley with Wallace Stevens and discourse with Emily Dickinson.

What was it that Louis Simpson wrote in his poem entitled, "American Poetry"? That it must have a stomach that can digest "rubber, coal, uranium, moons, poems"? That's not nearly enough. If our American government has a stomach lining strong enough to digest other countries with the least belch of acid reflux, then our poetry should have no problem doing the same to other traditions. Sometimes it's imperialist and sometimes it's not, but I'd rather dwell on Agha Shahid Ali shining pearls of the 6th century pre-Islamic Arabic ghazal in English and Kimiko Hahn modernizing the Heian period zuihitsu to include email snippets and grocery lists. I'd rather celebrate Anne Carson's idiosyncratic Sapphics and Alice Fulton inventing a new form of punctuation ("==") to baste together sense and sound. My awareness of poetic possibility comes from the internationalist school so translations necessarily make up a large part of what I read. Popular culture also seeps into the pores of my stanzas, taking the shape of unattainable desire and memory warp, barking like a cartoon dog and thinking in evanescent thought bubbles.

The future poem will be—indeed is already being—genetically modified to include sound and moving image, locative media, interactivity and new interfaces. I'm not yet enough of a codger to bemoan these changes, though the condensed and lyrical stanza seems to me a perfect technology, a zen bomb born in a word bud, dense enough to disrupt the waves of textual white noise that pass through our brains at any given moment. The fragmenting of aesthetic schools we see now will only intensify in the coming decades and the big bang of MFA programs in poetry will begin its big crunch, the proliferation of writing workshops slowly moldering into ruin. Poems will still make no money and therefore will continue to exist on the margins of society, flaring up now and again into the public consciousness but settling back more often to its hermetic life, sharpening the tools of perception, carving out the dugouts that will float from the visible to invisible world and back again, laden with antitoxins for accelerated and increasingly cybernetic contemporary life, full of notations for musical incantations that will call divinity back to the organic and interior world, a landscape that will seem more and more foreign to us as the horizon of the 22nd century approaches.