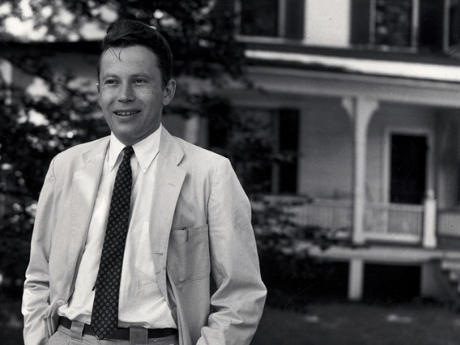 Dick Davis, in his excellent book Borrowed Ware, says that the fundamental job of the mediaeval Persian poet was to write poems in praise of local rulers. "The language of panegyric," he says, "in effect became the language of poetry."

Whatever American poetry is, it is not like that. Our poets are not hangers-on of the powerful, and praisers of an elite. In fact, we don't know who our auditors are; though the audience is pretty large, considering the challenging nature of the medium, it is so diverse and dispersed that one wouldn't know how to flatter it. Our incertitude as to audience is increased by the fact that we write in the world's leading language, and publish in a world which is interested even in the highbrow aspects of our culture. All that we can do is to say our say as well as possible, and hope that our poems will come usefully into unknown hands.

Because we draw on the enormous vocabulary of English, and because we are democrats, "the language of poetry" is not a specialized tongue, courtly or otherwise, in our country. At its best, American poetry makes use of all our tongues and realities at once, blending (as Stevens said) "the imagination's Latin" and the "lingua franca et jocundissima." That is the glory of American poetic texture, and that's the most recognizable thing about our work.

We were for a time a rather crass, practical country; that motivated Emerson's demand for a prophetic poetry, and Whitman's compliance, and the educative initiatives of Longfellow, Whittier, and others. But those assignments have expired, and if I had to describe the present function of poetry in America I would say this: We value the individual, and the participation of the individual in society, and one thing poetry can do is to help people find words for what they feel, for what they desire, and for the shaping of their experience. That sounds vague, but it is vital.

I don't much like that last paragraph, but I am hammering this out in a hurry and I leave it to someone else to say it better.