Stopping By with Windy Chien 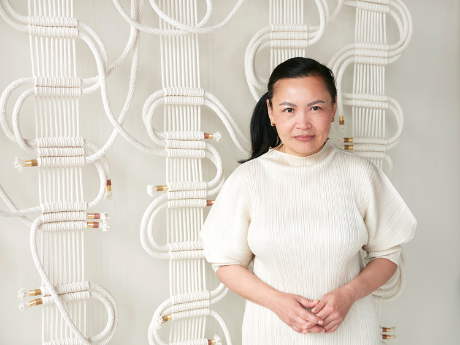 Artist Windy Chien is best known for her 2016 work, The Year of Knots, in which she learned a new knot every day for a year. Her work ranges in size from a knot that can fit in the palm of a child's hand to room-sized installations that are sought after by private collectors. Following long careers at Apple and as the owner of the legendary music shop Aquarius Records, she launched her studio in 2015. Select clients include the National Geographic Society, the Four Seasons Resorts, IBM, Google, and Nestle. Windy’s book about her work was published by Abrams in 2019.

Earlier this year, I only wanted disaster/apocalypse stories. Worlds falling apart. It’s comforting to have a narrative, fictional or not, to help make sense of chaos. My favorite of the half-dozen or so I quickly inhaled is Emily St. John Mandel’s Station Eleven. I love how Mandel connects the world-building in sci-fi and comic books to the world-building necessary after a population-extinguishing real-world pandemic. She identifies the emotion that continued acts of creation exhibit and civilizations require: hope.

The Covid cinema club I belong to screened Olivier Assayas’ Summer Hours. What a lovely, deft evocation of cycles—the literal four seasons framing the narrative, the life cycle of objects as innocuous as everyday glass vases and valuable as antique Viennese furniture, the ebb and flow of love and human relationships over decades. Assayas always gets it right.

But the writing which I’ve visited repeatedly is Teju Cole’s beautiful tale of three journeys: Caravaggio’s itinerant adventures around Italy and Malta, Cole’s own long-anticipated visit to see the paintings Caravaggio made in the wake of his wanderings, and the desperate voyages across the Mediterranean undertaken by the Bangladeshi and Gambian migrants Cole meets along the way. Cole shows how profoundly both a Caravaggio masterpiece and an abandoned, shipwrecked migrant vessel can convey the awful, “unbearable knowledge” of human vulnerability.

When, in 2016, I set about to learn one new knot every day of the calendar year, The Ashley Book of Knots was my guide. Sure, it’s a reference tome, first published in 1944, that documents almost four thousand knots, all compiled by the inimitable Clifford Ashley (pictured in a natty tuxedo on the back flap), and it’s revered as the bible of serious knot tyers the world over. But it’s also endlessly entertaining.

Knots are artifacts of human ingenuity, and in working my way through the book, I shared Ashley’s amusement, curiosity, and joy in meeting knot tyers of all stripes: the farmer, the baker, the climber, the weaver, and above all, the sailor. He identifies no less than a dozen varieties of bowline, for example, but also says a rubber band will sometimes perform just as well. Via The Ashley Book of Knots, I learned how to tie all the knots, and in doing so, I got a history lesson, found an entry to the state of flow, invented my own version of art school, and, finally, learned a new language. And I don’t mean just the salty jargon of the sailor who explains that splicing ropes together necessitates “crotching” ropes together at “cuntline.” (Remember, it was 1944.) I mean the language that the South African sailor and the Chinese decorative knotter, who can’t actually talk to each other, both speak: the universal language of knots.

In short, Ashley tells stories. And in doing so, he contributed to my own story. In the course of earning fluency in the language of knots, I found my artistic voice. I created a new life for myself.

Almost everyone who passes through San Francisco International Airport does encounter Janet Echelman’s monumental, 15,000 square foot sculpture Every Beating Second. Although the work appears simple—enormous knotted fishing nets suspended like clouds above travelers’ heads— there’s so much more contributing to the immersive experience. The terrazzo floor tiles outline shadows that would be there save for the terminal’s roof, invisible fans ripple the nets, programmed lighting evokes both sunsets and the Summer of Love. It’s exquisite. It lifts one out of the potential drudgery of the airport experience by inviting contemplation. That a human-made, constructed environment can so quietly and powerfully evoke pure, natural forces is like a miracle to me. When I travel, I go to the airport early just to spend time with this work.

In middle school, I memorized the words of two favorites. The first is Sara Teasdale’s “There Will Come Soft Rains,” featured in a poetry anthology my parents had given me. I’d chant its lyrical, rhythmic verses to myself, yet only today, as I google the poem, do I realize it was written during the 1918 flu epidemic. Its message of nature’s indifference to we humans, architects of our own demise, seems rather apt at the moment. The second work whose every single line I can still recite is the first hip-hop poetry to make it to this sheltered Chinese-American US Army brat in the late ‘70s: “Rapper’s Delight.”

Traveling. I sail the Mediterranean every summer for one week with a group of friends in a small boat, and I look forward to it intensely for the other 51 weeks of the year. Other than traveling, I miss serendipitous encounters with my fellow San Franciscans. When we venture out of our homes now, there’s a grim determination to get to wherever our destination is, complete the errand, arrive at the next safe place. I miss friendly nods, commiserating with other people waiting in random lines, overhearing conversations at the next table.

I wrote a whole book about giving yourself permission to do the scary, risky, impractical thing, like quitting a job you don’t love, or making a go of it with your art. No one is going to invite you to give up that steady paycheck. No one is going to advise you to make a huge career leap with no guarantee of success. No one else will give you permission, so you have to give it to yourself. I’d scotch tape this onto every person’s bathroom mirror.

The night Justice Ruth Bader Ginsburg died, Rep. Alexandria Ocasio-Cortez got on Instagram Live and spoke encouragingly about, among other things, the important ways artists can contribute during times of crisis. As a sculptor exploring line via abstraction, pattern, and repetition, though, it doesn’t make sense for me to start using text or representational imagery in my work, no matter how much I believe statements such as Black Lives Matter to be fact and no matter how many blocks the food pantry line stretches on my daily walk to the studio. What I have figured out during this time is a way to give back and a way to support. During pandemic lockdown, I’ve made more than a dozen works, sold them quickly via Instagram, and donated all the money to Bryan Stevenson’s Equal Justice Initiative, the San Francisco Marin Food Bank, and the progressive Movement Voter Project. It’s the right thing to do, and I get to partner with admirers of my art in supporting those fighting the good fight.

Yes, I’m always making work and I don’t get creatively blocked; there are too many interesting ideas to explore. During the past seven months of tight Bay Area lockdown, I’ve continued to toil happily in solitude in my studio and in that way not much has changed for me. Well, except that the studio is filled to the brim with completed commissions that I can’t yet install, such as a 30’ wide knot collection slated for Target’s corporate headquarters in Minneapolis. But a quieter city with fewer external distractions has allowed me to go deeper into research. I’m fascinated by early technology’s intersection with craft, like Fairchild Semiconductor’s 1960s exploitation of female Navajo weavers to assemble the company’s circuit boards. Or NASA’s use of “little old ladies,” as they called them, to hard code memory, via a wire- and-magnets technique similar to textile production, into the early Mars probes and Apollo computers.

Photo of Windy Chien by Molly DeCoudreaux and photo of installation by Geoff Velando.

Stopping by with Rachelle Hruska MacPherson

Stopping by with Rachel Eliza Griffiths