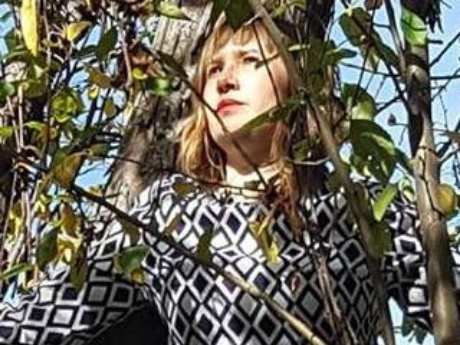 Andrea and I flocked together. Andrea and I played jump rope and tetherball at recess. Andrea and I got our periods. I showed Andrea how to insert a tampon. I showed Andrea how to take a shower with me instead of with her mother. Andrea and I played by the Fox River digging up fake clamshells and drowning Barbie dolls. Andrea and I walked down the railroad tracks to the sewage plant and climbed on a hill of shit that felt like muddy Jell-O. Andrea and I played with her mother's Hungarian tarot cards. I bit Andrea on the back of the neck and left behind teeth marks. I dropped Andrea and she hit her head on the radiator and grew a tiny blue egg on the middle of her forehead. Andrea and I rode a yellow bicycle built for two. Andrea was a stunt double. She always flew over the handlebars, flipped in the air, and rolled to a stop. The other Andrea was less stunt-like. She would land underneath the bike, scraped by the sidewalk and the bicycle chain. Andrea left moldy glasses of milk in our bedroom. Andrea listened to Prince and Madonna. Andrea didn't like that her mother had an accent and didn't shave her armpits. The other Andrea stayed in her room reading books. The other Andrea began huffing glue. The other Andrea almost had sex at a seventh grade orgy until Ramon Santiago's mother stormed in. Andrea and Andrea both snuck out of the house when Andrea's father shoved them into the walls. Andrea and Andrea set the kitchen floor on fire. Andrea and Andrea would spray their hands with hairspray and set their hands on fire. The two Andreas scared away all the boys with their twin powers and spooky Hungarian music. Andrea and Andrea practiced witchcraft. One Andrea wrote down the name of the boy she liked, rolled up the paper, tied it with string, and submerged it in a jar of water. Andrea dated a boy who made graffiti art. The other Andrea dated a boy who wore women's clothing. Andrea became homecoming queen. Andrea began getting Fs in school. Andrea pierced her ears with a hot needle. Andrea began smoking cigarettes. Andrea cut her hair, long on one side, falling over her eyes, and short on the other. Andrea was a cheerleader. Andrea was suspended for selling drugs. She gave a boy a pill that made his pee turn blue. He vomited blue bile all over science class. The other Andrea went to raves. Andrea began taking acid and ecstasy. Andrea is bisexual. Andrea was good at math and drawing. The other Andrea preferred English class and performance art. The first Andrea and the second Andrea pulled stockings over their faces so they would look like androgynous muggers. When the first Andrea's father choked the second Andrea, the first Andrea kicked her father in the chest until he let go. Andrea became addicted to heroin. Andrea moved away. The Andreas reunited in high school playing badminton in P.E. class. "This is my sister, Andrea," Andrea would say to her friends, who would get upset by this duplication of Andreas. A boy claimed to have made out with one of the Andreas at a party, but he called the wrong Andrea to follow up. One of the Andreas loved a boy until he loved Ayn Rand and she decided not to love him anymore. One Andrea became a stripper because she liked to dance and the money was good. The first Andrea shoved rum balls down the second Andrea's throat to get her drunk. Both Andreas would pee out of the second story window of their room at night. One Andrea jumped off the roof. The other Andrea was too scared and went out the bathroom window. Andrea developed ulcers. Andrea tried to die. Early on, both of the Andreas stayed home sick and watched License to Drive and The Lost Boys. This is how one of the Andreas learned to speak English. How could a billion Chinese people be wrong, Andrea? Both of the Andreas were sexually assaulted. One of them was raped. Andrea enjoys watching Law and Order: SVU. So does the other Andrea. Dun. Dun. Andrea's mother said blue-eyed people are not to be trusted, even though she has blue eyes herself. Andrea is addicted to prescription drugs and has severe anxiety. Both of the Andreas have brown eyes. The Andreas do not look alike. The Andreas are not related by blood. Both Andreas prefer orange cats because those are the color cats they grew up with. It is rare when the Andreas talk to each other now. The Andreas like to get high together and watch thrillers on TV. They give each other pedicures and do face masks and talk about the past. If you put two Andreas in a room together, they will speak from the shock of static. Neither of the Andreas will cry about being an Andrea. If you cross an Andrea they will squint their dark brown eyes at you until it feels like you are being punched in the face.


From Sister Urn (Sidebrow Books, 2019). All rights reserved. Reprinted courtesy of the author.

I wrote "Andrea / Hem" as an exercise in listing all of the poignant memories I had of early life with my sister. I had been attempting to create a book-length prose narrative about our lives together and was struggling with the details. I found I didn't remember some basic things, like the name of our fourth grade teacher, and also wasn't very interested in trying to fill in those gaps. I wanted to write the underlying current of emotion of the story, a description of an interior experience. My list experiment quickly turned into a prose poem that gathered its own strength of form (the hem) and knowing (the doubling, warping, and overlay of the two Andreas) and I realized what I had set out to do in a novel length was already accomplished in these two pages. I became interested in how one Andrea's experience might hide the other's experience and how disclosure of personal information was both masked in this way and also shared by the two selves whose intimate details were being entangled. This gesture is the essence of my relationship with my sister, with whom I share both a troubled childhood and a first name. I had intended to email this poem to my sister for her birthday, but I fell behind with other tasks and unfortunately missed that opportunity when she died from a drug overdose a few days later. The pain of that loss became the impetus for Sister Urn, a written memorial that would become the holding space (urn) of relationship, for both myself and my sister. Many of the other poems in this book are written from that space of inability to directly articulate the depth of grief. I used my sister's native tongue, google translator, and the help of my stepmother, to translate my grief in and out of English and Hungarian, as a way to form the poems in the first section of Sister Urn.