Ansel Elkins' “The Girl with Antlers” 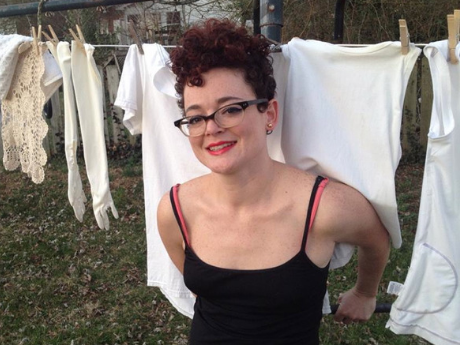 The Girl with Antlers

I tore myself out of my own mother's womb.
There was no other way to arrive in this world.
A terrified midwife named me Monster
and left me in the pine woods with only the moon.
My mother's blood dripped from my treed head.

In a dream, my mother came to me and said
if I was to survive
I must find joy within my own wild self.

When I awoke I was alone in solitude's blue woods.

A woman found me and took me to her mountain home
high at the end of an abandoned logging road.
We spent long winter evenings by the fire;
I sat at the hearth as she read aloud myths of the Greeks
while the woodstove roared behind me.
She sometimes paused to watch the wall of shadows
cast by my antlers. The shadows danced
across the entire room like an oak's wind-shaken branches.

When I became a woman
in the summer of my fifteenth year,
I found myself
suddenly changed in the mirror.
My many-pronged crown had grown
into a wildness all its own;
highly stylized, the bright
anarchic antlers were majestic to my eye.

The woman saw me and smiled. "What you are I cannot say,
but nature has created you.
You are fearfully and wonderfully made."

When night came it brought a full moon.
I walked through the woods to the lake
and knelt in the cool grass on its bank.
I saw my reflection on the water,
I touched my face.
You are fearfully and wonderfully made.


From Blue Yodel (Yale University Press, 2015). All rights reserved. Reprinted with the permission of the author.

Ansel Elkins is the first Latina to win the Yale Series of Younger Poets. Herbook, Blue Yodel, was selected by Carl Phillips for the 2014 prize. The poems in this collection are steeped in the landscapes of the Deep South and the lives of its inhabitants—the poor, the marginalized, the outcast. Elkins is a mixed woman of Puerto Rican descent who grew up in small-town Alabama. "Let it be known: I did not fall from grace. / I leapt / to freedom." Blue Yodel is a debut to celebrate!

Ansel Elkins on "The Girl with Antlers"

Blue Yodel is populated by the strange, the outcast, the bizarre, the different, the so-called "freaks" who live on the social outskirts. The Girl with Antlers is seen as an abomination of nature simply because she defies easy categorization. People fear the unknown and are often made uncomfortable when confronting someone who upsets their fixed definitions of personhood and notions of being in the world. The antler girl eludes classification by blurring the boundaries between human and animal, masculine and feminine. The mystery of her existence inspires uncertainty and terror, and as a result she is deemed monstrous and rejected at birth.

Like the creature in Mary Shelley's Frankenstein, which had a profound influence on me when I first read it in college, the antler girl's initial experience of the world is that of being rejected. She's seen as a freak, an abomination, and is met with horror and disgust and is subsequently cast out into the world alone. Like Frankenstein's creature, she is born at night and experiences a similar isolation and solitude. She lives the loneliness of outsiders and must find a way to journey through it.

The books that I've read deeply and intimately have a way of surfacing in my writing in ways I'm not even conscious of until years later. For instance, I wasn't aware of why, draft after draft of this poem, which I started sometime in 2009, I felt it so crucial that the antler girl's story end with the moment she encounters her reflection in the water. Later, I realized there is a parallel between her experience and that of Shelley's creature, who first encounters his image mirrored in a lake:

"But how was I terrified when I viewed myself in a transparent pool! At first I started back, unable to believe that it was indeed I who was reflected in the mirror; and when I became fully convinced that I was in reality the monster that I am, I was filled with the bitterest sensations of despondence and mortification."

While Frankenstein's monster achieves self-awareness and finds his image abhorrent because he sees himself through the eyes of others, the antler girl's moment of self-recognition arrives when she uncovers her own extraordinary beauty and power. The poem ends with a radical act of self-love. It is an affirmation of her being; she is able to love herself in all her strangeness not in spite of her nature but because of it. She is at home with the mystery of herself.

Though Shelley, Hawthorne, O'Connor, and others, have influenced me greatly, I always bristle when I hear my work described as "Southern Gothic"; the term feels like a net used to throw over my weird and motley poems whenever people don't know what else to say about them. Yes, there is strangeness and violence and Deep South heat in these poems—elements that can be construed to fit bill of the "Southern Grotesque"—but there's plenty of violence, hate crimes, Bible-thumpers, and "weirdos" in the North, mid-West and everywhere else in between. The South doesn't have a trademark on the American macabre.

I grew up a mixed girl of Puerto Rican descent in rural and small-town Alabama. Much of my childhood was marked by feelings of alienation: we weren't white, we weren't black, and outside of our extended family, which included Puerto Ricans, Cubans, and Mexicans, we weren't in proximity to a Latino community I could point to and say Here—these are my people, this is my tribe. In my earliest years we lived on the campus of Talladega College, a historically black college, when my mother was newly divorced and determined to raise two girls on less than $15,000 a year. People saw us as outsiders because my mother, who passes as white, rejected whiteness, rejected marriage, and rebelled against the categories of womanhood and social strictures of femininity many tried to impose on her.

I grew up a feral child and never found myself at home anywhere but with poor kids. Often I was mistaken for a boy because I ran around shirtless and barefooted and peed standing up until a horrifying public experience in first grade when I got found out (and laughed out) of the girls' bathroom. I know the loneliness and strangeness of "The Girl with Antlers" because I lived it. The intense feelings of being an outsider, of not belonging in any one social realm—I understand those too. But I also know the power of dwelling fully in the magic and mystery of my strange, wild, weird-and-wonderfully-made self.