Home > Poems & Essays > In Their Own Words > Ashley M. Jones on “What It Means To Say Sally Hemings”

Ashley M. Jones on “What It Means To Say Sally Hemings” 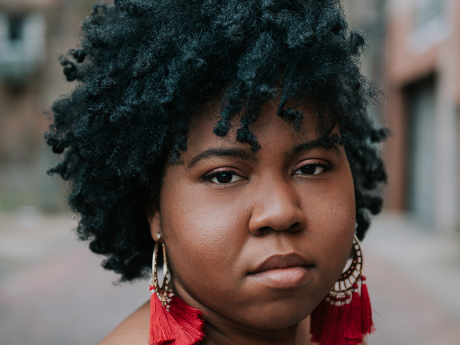 What It Means To Say Sally Hemings


From Magic City Gospel (Hub City Press, 2017). All rights reserved. Reprinted with the permission of the author.

On "What It Means To Say Sally Hemings"

It's interesting to talk about the genesis of this poem, because its current place in my life is what I think about more than how it began. In fact, I have read (and continue to do so) this poem at each tour stop for my first book, Magic City Gospel, not only because I want to tell Sally's story, but because invoking the spirit of a Black woman always brings me peace and power, and Sally is one such woman.

It's safe to say I've always been fascinated by the ways that history is taught in America. Let us tell it, 1492 was a year of great discovery and exploration instead of the start of mass genocide and pillaging. Slaves and masters were happy together. The Emancipation Proclamation marked the end of second-class citizenship for Black people in America. We know these things aren't true, that history is painted over to make us seem more heroic, more loving, more okay with the way things are. I'm interested in the facts, and in the discrepancies between the story in our history and the reality of what happened. Some people will tell us that Sally Hemings was Thomas Jefferson's mistress, lover, girlfriend, etc., but none of that is possible because she was a slave. She could not give consent, and in the eyes of the law, in the eyes of her master, she wasn't human enough to feel such a complex feeling as love.

Although I didn't read Thomas Jefferson's Notes on the State of Virginia until this year as I prepped to teach a unit on the Founding Fathers in a Race and Oppression course at a local university, I knew, just by looking at the facts, that Thomas Jefferson didn't think of Sally, of any Black person as a full human being. In Notes, Jefferson asserts his belief that Black people are scientifically inferior to White people for many reasons, but some of note are that we are smellier (more sweat), require less sleep, are incapable of complex cognition, and we are unable to feel love, only lust.

Again, I didn't have that specific information when I wrote the poem, but its spirit poured through the research I did on Sally Hemings' life. She was treated well because she was regularly used by the Jefferson family in various capacities. She was illiterate but her children weren't. Her children were freed by their father (Jefferson), but she was not. Her son, Eston, lived as a white man for the second half of his life, leaving his brothers behind. These are the facts, and they tell a vivid story.

The poem itself was written for critique in Denise Duhamel's poetry workshop in the MFA program at FIU, and it wasn't as much of a list when I wrote the first draft. As the poem developed, I realized I wanted the facts to stand alone so the reader could draw her own conclusions. I didn't want to moralize, as Sally's voice has been silenced enough—I wanted her life to exist on the page so everyone could see who she was and what was done to her. I wanted her to finally get to tell her truth.