Home > Poems & Essays > In Their Own Words > Brandan Griffin on “Silver Numeral, Leaping” 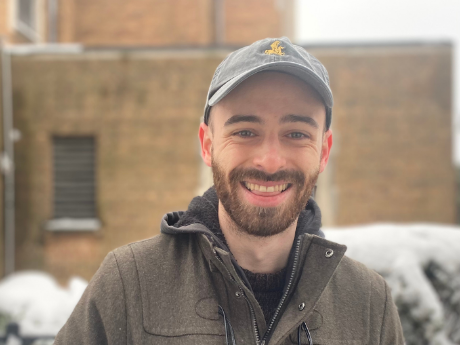 A fury of rain couldn’t smother

the furious puddles.     Count them.

A salmon heaved itself

from stream to stream, over dry banks,

retains our coldest wants.      Ones.

grabbing at the next fleshy liquid,

Our legs as numb

as numberless water.      Do you remain

countable, do you remain?      Closed

From Impastoral (Omnidawn, 2022). All rights reserved. Reprinted with permission of the author.

Thinking in this poem: what is an individual, what is one of us—wrapped in flesh and scales how do the fishparts come to be one fish, why not count the gills, the organs, the fins, and say the fish is so many fish, a riot of fractional fishes caught together in a net of evolutionary happenstance, so many organs and ligaments arranged fish-wise—thinking along these lines, I began to find the rhythm of a leaping salmon. A prosody related to how the organism, bound in skin, gets counted as one thing. The salmon a silver tally of itself: one. And not just the fish, but us too, the sensations pooled in one moment, spreading out in time, the beings we are and the beings we are composed of.

In this book Impastoral I didn’t want any humans, or barely any. I wanted to see how our perceptions and reading habits could be transformed into other creatures, so that we could see as those creatures and be affected by them, reevaluating our sense of life on Earth based on these encounters. Like the first cell membranes harvesting proton gradients around undersea vents, a poem could pinch off a little ocean water, a bit of that universal stuff called experience, and create some new inside—a particular being’s oneness. Every living creature could be seen as a container for this co-constituing salt water, which skin holds in place even as it threatens to spill out again and erase differences between species, fresh water meeting salt water amid the silver flurry of salmon.

Eventually I learned not to write poems but to type them, so that letters bubbled up in strange new spellings, living words—each word exactly one, but also more than one. But it was hard to get to that point. I used to just leave my poems as prose. I thought prose was a kind of undifferentiated sea from which new rhythms could emerge, full of the texture of some creature’s being. I thought prose was text before it became visible. So I let this poem remain shapeless, hearing the rhythm but unable to reel it into sight, until Hannah helped me see how more space, more linebreaks, more floaters allowed the poem to be seen—the words threatening to eject into their own worlds, but still bound in the rhythm and shape of the fish’s skin. Thanks to her (she has carried me through the darkest time) and others who have helped me along the way, this poem has wriggled alive.