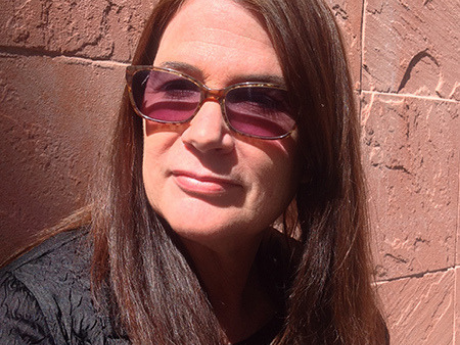 O, heart
In which four different chambers
Help you live and die, continuously
The woman walks around
Chatting, eating—the book is fallen from her hand
She drinks in the beauty of her children's' faces
As they change
She herself died
& yet they call her mother
She is now her stranger

Like the Roman baths that fell into decay
As soon as they were privatized,
The woman's period of possession
Is so many pages of antiquity
& only those who love ruins
Love her
She is now her stranger

"It is helpful to visualize the heart as two separate pumps, working in series—
Right heart pump, left heart pump. The heart has four chambers,
Two are muscular chamber that propel blood. Two hold the blood
Returning to the heart and at just the right moment, empty."

She is now her stranger, grand inquisitor of the different chambers
To help you live and die continuously.
Are we God or are we a book
Where is our body

The recycled Beloved
Her heart turns to tragedy, turns away
Tragedy is a chamber where she dies continuously, living
The ruin moving through time

Our little girl draws hearts throughout my notebook,
The shapes irregular, elongated down the page,
Much like an actual human heart
Which is shaped more like an upside
Down pear than a valentine.
Her letters likewise do not recognize the constraints of space,
Nor know margins as she writes them from left to right
The stick people she draws
Are all the same size.
Perhaps they are the first God,
The mother-father, matro-pater,
Before they separated
And she was locked in a safe.
Your betrayal thus is historical, and inevitable.
Likewise (or thus inevitably) the woman
Has misplaced the God in herself
What is lost cannot be kind

The woman in time is always
Written out of the creation
This appears to be a function of economy
Or her participation in an economy
That is designed to reduce her
By the year 200, she has many times been excised from divinity
In 1977, the year I graduated from high school,
Pope Paul VI again declared
That a woman couldn't be a priest
Because "Our" lord was a man

Her spiritual exile is physical.

During phase one,
The tube-like heart
Is much like a fish heart.
The second phase,
With two chambers,
Resembles a frog heart.
The three-chambered phase
Is similar to a snake or turtle heart.
The final four-chambered heart structure
Distinguishes the human heart.

I love my mother and while
My mother is not
Can not be said any longer to resemble a Lona Alice—
In sleep, in many moments—
She is my mother
Mine
Always contains
Not mine

The woman is not a ruin!

"The creator, becoming arrogant in spirit, boasted himself  over all
Exclaimed: 'I am father and God and above me there is no one.'
But his mother hearing him speak thus cried out against him
'Do not lie!'"


O heart our divinity
Generating, making itself grow,
Seeking itself, finding itself
Mother of, father of,
Sister of, itself,
Son and spouse,
Of itself.

From O, Heart (Barrow Street, 2014). Reprinted with the permission of the author.

"Continuous Acts" comes near the end of O, Heart a verse-drama rooted in the utterance of an omniscient or all knowing narrator, never named, who speaks on behalf of the woman, the main character in the book. All of the poems posit and argue the main questions in the piece, i.e. what comprises what we call the human heart, how can we know our "heart's truths," and how the answers to those questions by women and men provide differences in kind historically to the question of sincerity. The main "drama" is the dialogue—between what we call the humanities and what we call science, and the inconclusive answers provided from both disciplines. The narrative of this struggle takes place both in the questions posed by the narrator to the woman, in the woman's interrogation of the figure called only "the stranger" and in numerous quotes from literature of all genres, from lyric love poetry, Nathaniel Hawthorne's The Scarlet Letter, Kate Chopin's The Awakening, as well as in passages from early scientific inquiry into the function of the heart, which was ultimately proven and demonstrated by William Harvey's treatise on the heart De Moto Cordis in 1628. All of this brought into conversation might have just resulted in an interesting exercise, but for the need I had to understand my spiritual malaise, and to write my way through it. My father died of a heart attack at my home, my husband has mysterious heart issues, and my sister suffered a series of heart attacks just as the book was published. About half through Kora in Hell William Carlos Williams remarks "the best work…is always done under stress, and at great personal cost," which has been true in my experience, and O, Heart is a book written under such stress. The woman, as John Berryman said of Henry, has suffered (serial) irreversible losses, among them a direct connection to herself. When I was younger, I took pride both in my life and poems in following a via negativa, a negative way, which resisted identification with the common demographics of human experience—those of family origin, geography, politics, even of friendship—as this kind of self-identification seemed to me to miss, or skip over, the insight that Otherness, in all its strangeness, might provide. My pride now seems misplaced, as I have found time makes strangers of us all, and it's the extent to which one can make room to love oneself, which might give one the ability to love the others. The poem "Continuous Acts" considers this condition of becoming a stranger from a personal point of view, via meditation on women's history as art object, or the "beloved" subject, as well as through my Catholicism, which likewise places women in subordinate position in relation to men, to herself, and to God (not unlike the condition of the "foreigner" described by Kristeva in Strangers to Ourselves.) While I have not for many years been a practicing Catholic, I still retain the teaching, good and bad. Writing "Continuous Acts" allowed me to locate the historical and psychic construction of my self-disconnection, which led me to gnostic texts that place Mary, the mother, in equal relation to God the father, and Jesus the son. The poem ends with my own enactment of what Blake called "the human divine," which in my reading is available through what shrinks, or the innocent, call an "open" heart.