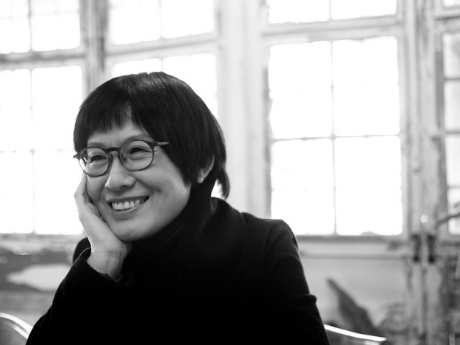 from Autobiography of Death

Woman grins,
Do princes really need I love you to be translated?


From Autobiography of Death (New Direcitions, 2018.) All rights reserved. Reprinted with the permission of the translator and publisher.

On "Autobiography of Death"

On December 3, 2016, Kim Hyesoon, her artist daughter, Fi Jae Lee, and I met at the sixth weekly candlelight protest in downtown Seoul at Gwanghwamun Square. We each carried a lit candle in a cup and a sign that read "Park Geun-hye Step Down." We sat down for a while in awe of the waves of lights and sheer number of protesters parading through the square. The surviving family members of the high school students who had drowned in the 2014 Sewol ferry disaster led the march to the gate of the president's executive office, to continue their demand for an investigation of the disaster. Kim Hyesoon turned to me and said that she hadn't been out in the streets to protest since the dictatorship of the 1980s. And it was my first protest in Seoul. I was just a child when my family left South Korea because of the dictatorship. That night, a record number 2.3 million people hit the streets nation-wide and demanded an end to Park's presidency and her corrupt, conservative administration. After the nineteenth rally, South Korea's constitutional court upheld the impeachment of President Park, the daughter of Park Chung Hee, who had enforced nearly two decades of US-backed dictatorship from 1961 to 1979.

Each of the forty-nine poems in Autobiography of Death represents one of the forty-nine days during which the spirit roams about after death, before it enters the cycle of reincarnation. The book concludes with a separate poem, "Face of Rhythm." When Kim Hyesoon sent me these poems, she said that she had no choice but to write them because of all the unjust deaths that have occurred in South Korea. She was referring to the recent tragic event in which 250 high school students drowned when a private passenger ferry heading to Jeju Island had capsized. Many believe neoliberal deregulation and privatization that led to safety violations played a crucial role in the sinking of the ship, including the state's dismal failure to rescue the passengers. The most recent findings have revealed that the ferry, which was carrying 1,228 tons above the legal limit, was also carrying 410 tons of iron that were meant to be used for the ongoing construction of the new naval base on the island. The base, which now hosts US and South Korean warships as well as cruise liners, has been contested by activists and residents for the past decade. Kim was also referring to the many deaths caused by the recent dictatorships, including the brutal military suppression of the pro-democratic May 1980 Uprising in the city of Gwangju. Kim says about her collection, "When one writes poetry in a country of so many deaths, it's inevitable that the voice that emerges is the voice of someone who is preoccupied with death. I was very, very sick while writing these poems. Death was in front and in back of my head, it was inside my head…. That tree doesn't know me. That rock doesn't know me. That person doesn't know me. You don't know me. I also don't know me. I wanted to die before I died."