Home > Poems & Essays > In Their Own Words > Eléna Rivera on “Aug. 12th With Wordsworth” 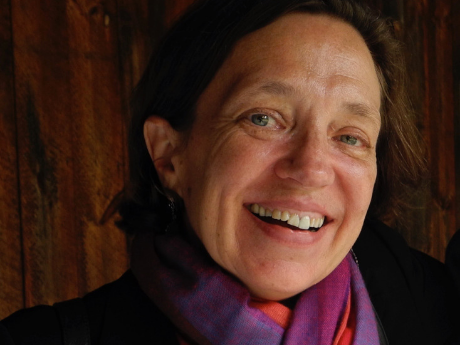 What a surprise the fresh breeze, noticing it
Golden euphoria and wham! a strong wind
ever ready behind small experience
Words will latch on to air if you let them grab
burrow their way stick have you think you are it
Eenie meenie miney moe and the sweat drips
the shirt clings to memory clings years ago
And when you least expect it it all comes back
I'm at a window elated by the sky
the moment where lights branched out and I was small
A day where fireworks competed with lightning
We in the big city in our huge smallness
rushing in out of the bodega for beer
and chips cigarettes and "real" celebration


From Scaffolding (Princeton University Press, 2016). All rights reserved. Reprinted with the permission of the author.

On "Aug. 12th With Wordsworth"

To write a sonnet-a-day for a year and explore what the form allows. Traditionally a 14- line poem, a sonnet is a "little song" from the Italian sonetto and the Latin sonus "sound." In this series, an additional constraint was imposed on the sonnets by writing them in hendecasyllable lines (a deliberate move away from the traditional English sonnet's pentameter, or ten-syllable line, as a way of altering the rhythm (sound) of the poems)—the eleven-syllable line as mastered by Bernard Noël in his The Rest of the Voyage.

"Aug. 12th," one of the let us call it "direct" sonnets in the book, was written utilizing the last word in each line of Wordsworth's love poem, "Surprised by Joy." The élan of the sonnet remained, while most of the words didn't, hence the word "With" in the title: "I turned to share the transport—Oh!"

Sonnet as a "scaffolding" for words/lines to hang on. "Scaffolding" or "scaffold"? The criminal, in this case a writer, climbing up the stairs of form, ready to hang for what's been written. Every day the unequivocal necessity of writing another 14 lines; the process dramatic, the amassment daunting, the picture accrued surprising. The accretion determined not by theme, as in a sonnet sequence or crown of sonnets, but rather more messy, without motif, giving a "journal-like" quality to the content—a daily seriality with specific constraints.

The sonnet gives an illusion of finitude; it's compactness and constraints can be quite confining as a form, even as it liberates certain material. You might long for the ocean in the middle of a lake. "Ah ha!" you think, "this is it!" but it isn't it at all, in the same way that life is always evolving and changing, we are always evolving and changing and what may look one way one day, will look completely different the next. There's never actually an end, books of sonnets just show an infinite variety and it's the accumulation that one is left with, a fullness of an accumulation of days.