Home > Poems & Essays > In Their Own Words > Hanif Willis-Abdurraqib on “Ode To Kanye West In Two Parts, Ending In A Chain Of Mothers Rising From The River”

Hanif Willis-Abdurraqib on “Ode To Kanye West In Two Parts, Ending In A Chain Of Mothers Rising From The River” 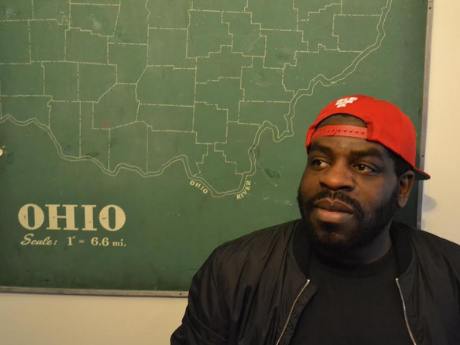 Ode To Kanye West In Two Parts, Ending In A Chain Of Mothers Rising From The River

From The Crown Ain't Worth Much (Button Poetry /Exploding Pinecone Press, 2016). All rights reserved. Reprinted with the permission of the author.

On "Ode To Kanye West In Two Parts, Ending In A Chain Of Mothers Rising From The River"

I think I'm at my most focused when I'm writing serial poems. Things that are often invented, or with loosely-driven rules. There's a lot of these poems scattered throughout The Crown Ain't Worth Much. Poems in the voice of my barber, poems in the voice of my mother's ghost, poems prompted by sneaker purchases. I wrote the book trying to build this very touchable, livable world, but I didn't want to sacrifice my process. I began writing these odes in a particular fashion. Odes largely in name only, since so few of them are directly facing their subjects in the ways that odes traditionally do. An ode to a musician, ending in an image. I got really fixated on determining the endings of these poems before I started writing them. It gave me a type of freedom, in a way. I felt like I was being pulled toward something rather than pushing myself toward it.

A funny thing about grief is that our reactions to it are so rarely defined by us. I lost my mother when I was 13, and I spent the next small handful of years listening to any number of behaviors being attached to that grief, when the thing I wanted more eagerly than anything else was silence.

I don't know Kanye West personally. I feel an odd kinship with anyone who has lost a parent that they cared for. My mother died unexpectedly, an entire bridge that I expected to walk with her collapsed, overnight. I work through this in odd ways, especially as I get older, get closer to maybe having children of my own. I re-build the unwalkable bridge in my imagination and try to take as many of my siblings in grief across as I can.

To say that I'm disappointed in Kanye West feels like a stretch now, and something I'm not really in a place to say. Still, my relationship with him now is different than it was when I wrote this poem a few years ago, when I was more invested in his career trajectory. I often tried to offer him grace without defining his grief for him.

The first section of the poem is largely language that was re-purposed from YouTube comments on the "George Bush doesn't like black people" video, re-written somewhat more poetically. I remember that night so vividly. I remember the moment, feeling a small jolt of excitement, and then a wave of anxiety about what this would mean for his career and his life, going forward. I had to find a way to write that language as I was seeing it. It was one thing to just copy and paste people with confederate flag photos shouting "get out of our country!" or "back in the day, you'd be hung!" but it's another thing to fold that language into the violence that is actually being expressed. Not a hypothetical, but a desire: "I want to see you hung." There's something terrifying about what it is to not blink in the face of that, for years, even after someone who you love is dead.

There's a gentleness in saying "I, too, have been overwhelmed by grief. And I have not always been proud of myself in those moments." The bridge I mentioned, largely, gets built here, in the second half of this poem. What do we do with grief when it isn't marketable? When it isn't the grand beast that exists solely to be overcome and then celebrated? Fuck this idea that the other side of grief is only endless joy and nothing else. The other side is sometimes just another side, and you've gotta cope with that shit too. I have looked upon the people who have cursed my mother's name and wished the same violence upon them that people have wished upon Kanye West. I was driven to my wishing by different motivation, and the results of me wishing that on a boy in a schoolyard have less far-reaching implications, yes. But I was interested in the coming together of the two emotions. Kind of like pulling your eyes up to the mirror for the first time in the morning after a really wild night. I was interested in speaking out loud about what my own sadness has driven me to, and naming it for myself. If there is anything in the traditional ode, it is here, facing Kanye West, but not asking for anything in return.

I like building a space in the poem that the dead can come back to. Not just the dead as dead, but who they were as a living person. I don't remember most of my dreams unless my mother is in them. It has been that way most of my adult life, but I remember less dreams each year. I had dreams during the writing of this book that really fucked me up. In one, I was at the edge of what I imagine was the Scioto River, which runs through Columbus, Ohio, where I'm from. And all of the fish, when they opened their mouths, had my mother's laugh. All of them leapt from the water, and her bright head scarves trailed them. And as they gathered en masse at the riverbank, I woke up. The truth is, I don't want the burden of having to think that every dream is trying to tell me something. Sometimes, when there has been enough sadness, it's just nice to close your eyes and be greeted with something other than simply darkness.

The Crown Ain't Worth Much (Button Poetry /Exploding Pinecone Press, 2016)