John Myers on an untitled poem from “Smudgy and Lossy” 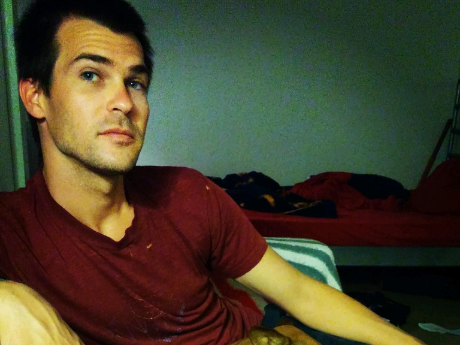 untitled poem from Smudgy and Lossy

We both run
orchards out

our minds but I
want to see

you smile again
the way you

do it in
the mush. Such

as referring
to my grope

as gold in
unison

these times I
feel luck hard

From Smudgy and Lossy (The Song Cave, 2018). All rights reserved. Reprinted with the permission of the author.

On an untitled poem from "Smudgy and Lossy"

Or be reminded. Once I realized I could belong I felt freer. We have a practice of writing down our dreams on sheets of butcher paper first thing every morning. I'm interested in the recognition of someone else's as one's own.

I wanted to write into that pleasure. You might be interested to know the manuscript was called Cider Kit for a while. Apples came up a lot. But first I had to remind myself what it was to be a peer.

I found Halt Cribbing provoked intimacy. It was my first time west of anywhere, I had just quit smoking, and I had a past as a developmental biology research assistant. In hardware stores there was hot popcorn. The varieties stunned me.

Smudgy and Lossy was gathered in Montana and re-elected in Arizona. I was happy to go back to the basement of Double Front Chicken in Missoula and up the dry creek beds of Sabino Canyon in Tucson. I'm grateful to my teachers and colleagues in the MFA program at the University of Montana. They are here in this book hard.

Now we live in Idaho, not far from Stanley Hot Springs, where I heard ruckling what I later learned were grouse and tasted my first ghost. In the Selway-Bitterroot Wilderness was where this untitled poem found me. November or so, 2010. I felt thrilled.

There are fairies there in the moss around the springs, which takes half a day to hike to. Longer in winter. One crosses a river and sees across the river scree. To have moved from thinking about poems as finished things, this untitled poem was written while in the early stages of falling in love with my partner Brian.