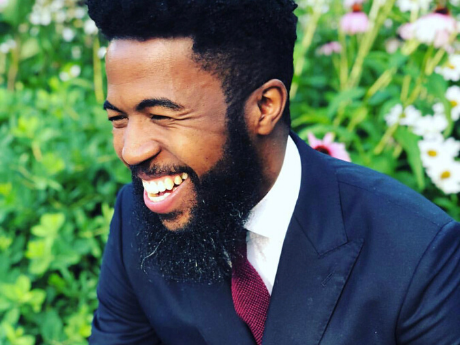 As you are both Malcolm's
shadow & the black unknown
he died defending, I praise

your untold potential, the possible
worlds you hold within your body's
bladed frame. I love how you stand

in exultation, arms raised
to welcome the rain, the bolt,
whatever drops from the sky's slick shelf

without warning, as all plagues
do. Miracles too. & bombs that fall
from planes which hold men with eyes

-hairs, & the home an explosion turns to blur.
X marks the box on the form that bought
the bombs, paid the trigger man, sent

the senator's son off to school
without a drop of blood to temper
his smile, stain leather

boots, mar the occasion.
X: every algorithm's heart
-beat, how any & all adjacent

quantities bloom. A kiss.
How a signature knows
where to begin its looping

the borough that gave
us b-boys, the Yankees,
my mother's left

hook, swift enough
to knock any living
thing off its feet

like a cartoon villain
bested by banana peel
or spilled oil, his eyes

on a test. How
my great-great
grandfather,

who could not read,
rendered his name,
as if an homage

to his own opacity,
as if to say, I contain
the unthinkable, or, I abstain.

From The Sobbing School (Penguin, 2016). All rights reserved. Reprinted courtesy of the author.

"X" was one of the final poems to go into The Sobbing School, and is a reflection of any number of the book's central concerns: kinship and collectivity, violence, blackness and/as indeterminacy. My ongoing interest in the work of metaphor is inextricably linked not only to the idea that nothing is nothing—or at least, that there is an unfettered, untamable capacity built into what many of us are taught to call nothingness—but that everything and everyone we encounter is more or less opaque, legible only in flashes, or briefest windows of apprehension.

The poem began in my mind as an ode to the letter X and its breadth as a symbol, but eventually became more of an extended meditation on my most intimate associations with the letter as a kind of signpost, one that directs me towards various points in my personal history. I see an X on the page and think of home. Of the singular polymath widely known as DMX (Yonkers own), but also "The X" as common, vernacular shorthand for the Bronx, where I was born. Where my mother, and all of her siblings were born. Where most of my family still lives. X brings to mind the Spike Lee film I saw when I was 6 years old, as well as The Autobiography of Malcolm X, which I would read later the same year. I see an X and think of infinite possibility, but also foreclosed genealogy; a past that cannot be recovered, only reimagined. And this was, in a sense, my foremost concern throughout the process of working on my first book. That is, how to refashion a past that brought me great agony, and often shame, and put it to better use. How to make sense of contemporary brutality that blurs the lines between past and present altogether.

I often find myself hearing and thinking through different versions of the same question: what time is it if you're black? What is the relationship between blackness and time, blackness and world? Is blackness in the world? Or is it the world's end? How might blackness, and black poetry in particular, help us imagine the end of this world and the dawning of another? Here, I'm thinking explicitly of Lucille Clifton's fantastic poem,[1] but also the works of Aime Cesaire, Audre Lorde, Ed Roberson and others. It was Roberson, after all, who wrote that "the world's desires do not run the Earth, but the Earth does run the world"[2] and I think he's right. So that's what I'm after from now on. Not the world, its extractive practices and protocols, but the earth; a kind of planetary thinking that is intricately woven into the black aesthetic tradition. "X" is part of a much larger, inaugural gesture towards that project, if only from a distance.