Home > Poems & Essays > In Their Own Words > Katie Peterson's “Spring” 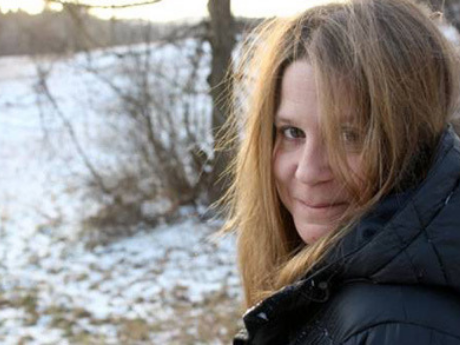 I have been trying to read King Lear. End up drinking
red wine, and talking about the tropics.
Thought there might be a poem in the play,
maybe the way he talks about the button
on his coat before he dies standing, carrying
the body of the hanged. Maybe the part
where she refuses to bargain and the maps
on the table are redrawn.

I am sleeping. Elsewhere, you are finishing Tess
of the D'Ubervilles, those last chapters, before they end
up at Stonehenge, and Angel says to Tess
Sleepy my dear I think you are lying
on the altar. The part where the book lets them
hold each other, without sleepwalking
or lies. Angel has traded in this harp
for a tin kettle and bread. They picnic in a damask-curtained bed,
a fugitive and an accomplice. I may be turning
toward the branch of apple blossom bearing its burden
of the raindrops in an even more buoyant aspect
than the night before. Now you are the caretaker,
finding Tess's fine silk stockings draped
on the damask coverlet in the house they squat in,
giving both of them away.

The tree in the side yard not
yet in the kind of flower to release it
and uncover it again. Everything, everything, and before
everything the possibility of something else,
the moment when a moral gets minced by an account
a body makes of any other body,
and time takes place instead of taking time.
Cordelia with the armies of her husband
scouring the unharvested corn of her homeland
for her naked, wandering, delusional father.
Tess at the dairy, good at her job. Angel
in the field, his fingers on the strings of his harp.
You carrying me into a lake in August,
the summer my mother left the earth.

From The Accounts by Katie Peterson. Copyright © 2013 by The University of Chicago. All rights reserved. Reprinted with the permission of the author.

The same poem can serve several purposes. At my most single-minded, I began to understand this, against my will, in the years after my mother left the earth on May 22nd, 2008. For a time (and I'm not sure whether this time has actually ended, or will ever end) everything that felt like poetry also naturally resembled mourning. But poetry attaches itself to the present moment, and the present moment quickly became full of other sensations. Part of me wanted to retreat, and the world as I experienced it had other plans. Mourning took turns with falling in love; falling in love took turns with doubt; doubt took turns with happiness; happiness bred guilt.

This poem, "Spring," is on the first page of a book called The Accounts that tries to tell the story of these years. The title of the book has something to do with the idea that we live (and die) in multiple stories. Many works of art treat have treated this theme from a dramatic and interpersonal perspective, from the Gospels to Rashomon to The Bridge over San Luis Rey. In the second section of the collection, the title poem makes three accounts of my mother's last hours: a spiritual account, a psychological account, and a medical account. Still, as surely as I felt that there were different stories, the poem and the event of the page kept telling me I was speaking in one voice. But what if King Lear was actually an account of my life? What if Tess could actually be my spiritual biography (Hardy kind of thought it was his) even if only for a time? And what if our different stories, different possible lives, and imaginative lives, exist like branches of a tree, going on in different directions even if our eye isn't following them?

The first lines of "Spring" document a moment in which a number of different stories come together in an artificial but useful arrangement. They exist with enough intensity to persist in the imagination. The speaker may fail to read the play and choose what many of us might agree is a more pleasurable activity for her afternoon, but doesn't the play go on, in some sense, without the speaker? She may go into the world but somewhere, in some space, isn't that other story continuing, isn't Cordelia sealing her fate, isn't Goneril gearing up her conspiracy? I heard the poet Marie Howe say in May that an Emily Dickinson poem is like an electric current that got turned on and never got turned off. Whole books can be like this. This poem describes how the "narratives" of a personal now, a personal then, King Lear, and Tess of the d'Urbervilles coexist. In The Accounts I want to restore freedom of assembly to disparate moments in space and time. I had an idea – still have an idea – that by assembling narrative fragments, you can raise some ghost of a whole. This aesthetic compulsion, in the poems, pre-dated my mother's passing – but after she was gone, it took on the intensity of a spell.

Speaking of never getting turned off, the poem is also a love poem about reading, which is, I think, the best subject for a love poem. The occasion is knowing that the person you love is reading your favorite book (Tess of the d'Urbervilles). It helps if the person likes the book – in this case, he loved it. Though we were not in the same room I could bring him closer by imagining myself inside that plot with him. Reading is a sexual pleasure. Knowing someone's mind is where your mind has been can cause an increase in ardor. A year later, when I taught the novel in a course on literature and innocence with fierce, memorable students, I cursed my optimism about my own healing when I had assigned it the summer before in the wake of the breakup. You have to believe me, the pages of the book almost burned, remembering how much I had loved someone who held not even that copy but simply that story in his hands. Poor Tess, guilty of nothing. Poor dumb Angel. But in those last pages, they sleep in a beautiful bed.

I haven't done that many readings from the poems from this book, which comes out this September, but in the readings I had done before I put the manuscript together, I tended to read this poem first. This may have something to do with my decision to put it on the first page. I know that, sometimes, when I read "Spring" out loud, I can almost believe, when I am paying attention enough to be completely distracted each time a new narrative enters the poem, that certain persons lost to me can come back – not that they do, but that they could. And then, after the poem is finished, that sensation quickly disappears. It's like trying to put a tent up in the wind, seeing the whole form of it possible, outlined, and sturdy, and then watching the elements simply and quickly taking it down.

The Accounts
(The University of Chicago Press, 2013)