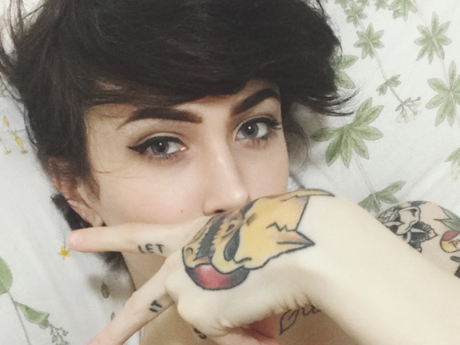 fumbling towards the
sinewy rightness
of each others' bodies

From Total Mood Killer (TigerBee Press, 2017). All rights reserved. Reprinted with the permission of the author.

AU stands for "alternate universe." In fanfiction, AUs are ways of using established characters from a TV show, film, comic, or whatever to tell a different kind of story. What if the cast of Brooklyn Nine-Nine worked at a coffee shop. What if Teen Wolf was a western. And so on.

I love the concept of using these personalities that are going to be familiar to your readers to tell a completely different kind of story than the one they come from. Of course, you could argue that characters are inextricable from narrative and that treating them as neatly separable is a major problem with modern fandom and popular analysis of fictional media, but that's a complicated conversation I don't want to get into here.

The other part of the title is also about fanfiction, at least partly. I used to be pretty into gay male romance stories. If I'm honest, I still kind of am. I think an easy response to women being interested in those kinds of narratives is to say that they're fetishizing gay men, but that strikes me as a really uncharitable perspective. To me it makes sense that straight women in particular might want to write and read romance stories where the frustrations of heterosexuality aren't present. And for queer women, I mean, boyishness is already deeply tied up with our experiences. So, why not imagine what things might be like if you and your partner were teenage boys?

Personally, I've always viewed gay men in this kind of romantic light that I know erases a lot of complexity, but it's hard to help sometimes. That's another complicated conversation: women being the ones writing and consuming a lot of gay men's fiction. But being a woman can feel like a trap, and I associate maleness with freedom of movement, powerful anonymity—the ability to slide effortlessly into a scene. So it fits that I wrote this piece in the middle of January while I was staying at my friends Steve and Leslie's place in Midland, Ontario. I wasn't literally trapped, but I'd felt restricted all winter—by the weather, by borders, by my lack of a car. I was missing my girlfriend down in New York, who I hadn't seen in months, and dreaming of a kind of impossible masculine freedom.

Stylistically, this and a lot of other work I was producing at the time was influenced by Kay Ryan. She crafts these intricate little dioramas in her poems and I think this is the closest I've gotten to achieving that effect. I've adored her work for years—she's one of my all-time favorite writers—but have thankfully stopped trying to imitate her rhyming structures.