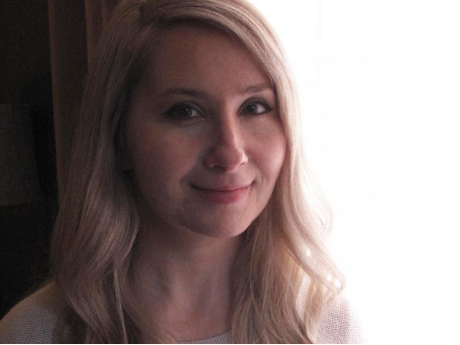 Panic, because suddenly everything signifies,
a kind of net of sunlight, pulling all directions at once;

the background's flaw is that it beckons:
the poodle's boat, Noah's palm, the dove-magnet:

a barbarity! A flame at the vanishing point!
Where things trace back to one man's wanting,

which is often the wrong thing for him altogether.
So people drowned. Their things emptied of humanness,

made violent in the deaf water, became filth.
Get used to it, Noah told his sons, drunk, sad as God—

in a story, the first to die are the ones who don't tell stories.
The rest fish in a soul that narrows, defensively,

into a corridor that exits the ark, into
the awful future: half magnetic, half veil.

Poem reprinted from The Flood, a chapbook from Coconut Books, and originally appeared in Witness Vol XXIV No 2 (2011).

Some research recently revealed that it is not too much information that is stressful or overwhelming, it's too much information that seems to be meaningful. For example a walk in the woods is full of enormous input: animal sounds, plant and dirt smells, textures, air moving, piles upon piles of elaborate visual details, and yet a walk in the woods is considered relaxing. It's relaxing because the input is not "meaningful," not crucial, or surprising, or pressing. Millions and millions of leaves are not relevant details; the brain glazes over them. It's a wash of ok-ness.

A flood is an event that would make the landscape overwhelmingly meaningful.

The internet is a kind of flood. In order for it to not be stressful one must prioritize steadfastly.

This poem and many other poems I wrote about two years ago is about a painting by Paolo Uccello. My book had just come out and I wanted to write about something other than "myself" so I checked out an enormous Uccello monograph from the library and lived with it for half a year, looking at the paintings in it almost daily.

I picked Uccello because I had read Vasari's Lives of the Artists and Vasari called Uccello "arid, half-formed, difficult," and he chose to "vex his own soul" with the new problem of perspective in art. People do vex their own souls and I think about that still. I have seen even myself vexing my own soul. So I liked him immediately. Other things I was reading at the time were Mei-Mei Berssenbrugge's I Love Artists, and Pia Juul's I Said, I Say, which I was translating from Danish to English.

Uccello happened to be painting at a time between the elaborate and strained Gothic style and the forthcoming heroic style of the early Renaissance. This painting shows two enormous and frightening walls, the sides of the ark, a before and after, which doesn't make any sense at all. The walls are really time pressing him into a liminal space, a timeless mess of conflated dramas caused by landscape, un-prioritizable, where he is trying very hard. An inter-net.

This was painted in 1447 on a wall of Chiostro Verde of Santa Maria Novella, the "Green Cloister," so-called because of its greenish plaster. It was damaged by water, a real flood. The painting became mushed and rotted, now peeling slowly. It has not been fully restored. The bodies look green and sick against the nicely wooden pyramidal bases of the ark. I don't know if I would like the painting as much if it hadn't been damaged. It is another painting now. This is how all art is contemporary art.

It's not that I like damage exactly, it's more that damaged things seem true. The good maintenance of a new or cared-for thing is an artifice I want to see beneath. This isn't about death. Death is pretty clean, a clicking shut; it's life that rot belongs to, survivors who see and smell the decay—this is living. It's a radical thing to accept.

An inter-net of living. Here there is a dead boy arched stiffly in an impossible way. A crow eating another body. A calm man gesturing to no one, hands on his ankles (propping or pulling?). A dog on a raft. A man emerging from a barrel. A man with an axe on a horse fighting with a man with a wavy club and a mazzocchi (a weird checkered Italian tube hat that Uccello seemed to be obsessed with representing) that has slipped down his head and now is around his neck like a useless baby life preserver. There is a nude man with a hole for a face about to club a black blob, a thing I have never been able to make out, in the distance. Little branches and smoke are pressed against the ark. And way back, other evil things: a wrathy sky, dark, lightning, fire. Too much else to say. I think he couldn't manage rain, or the water very well, the key thing, what rots these bodies, life. He liked hard edges. But it came to his painting later. He is somewhat of a failure I suppose, although I don't think he didn't know himself, like Vasari thought.

In Genesis, after the flood, Noah gets drunk and lies naked in his tent for a while.