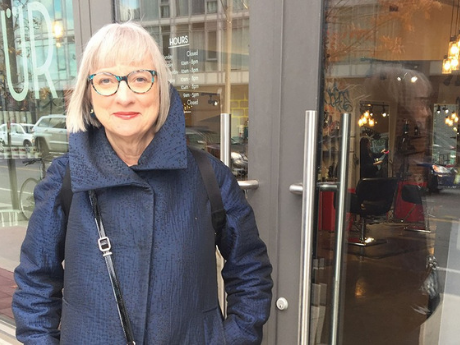 Unable to quell a sudden urge for neatness,
I reached to put away my Summerhouse cup,
lifting up a wire shelf insert by mistake,
rolling a whole stack of china toward me,
barefoot in my nightgown on a step stool,
dropping the precious cup, which smashed
as I pushed both my hands to save the rest
—and did.
I tried not to make too much
of the one I'd never lift to my lips,
throwing the pieces out immediately.

It's only a cup,
You saved the rest.

Oh yes, I did, but just as in a classroom
where all the pupils quietly work but one who refuses,
my mind roves to an unlearning I mourn
even as I see the stacks
of all that has been accomplished—and saved.
Why couldn't I have just had breakfast
before I started my tasks?

Because he was a flushed and violent boy
I had not thought of in twenty years
until his mother wrote me he had died,
not saying the cause,
and I cannot say the boy was the cause of my urge,
a sweaty boy caught hanging the shorter kids
up by their collars on the high coatroom hooks
and whose ruddy face looked so little like porcelain.

At first the poem "The Cup" came in response to an assignment I gave myself: try for 14 lines and a single domestic image. Obviously I didn't make it! But focusing on the cup let me channel the narrative drive of the poem. Originally it was only about how the cup smashed, the pieces of the event all squashed into 14 lines. Then Honor Moore said, "What kind of cup was it?" And Lynn Emanuel asked, "Didn't the woman have breakfast?" As those poets, whose advice I value, posed questions, I received the letter of mourning I mention in the poem. (Yes, this is a poem based on things that really happened.) It was in the thinking about the breakage of something minor (the cup) that the major crept in (the boy's death)—rescuing the poem, if not the little cup, or the fragile but bullying boy. The force that really drove the lines was the state of shock that intruded on the calm, domestic image, not an assignment, after all.