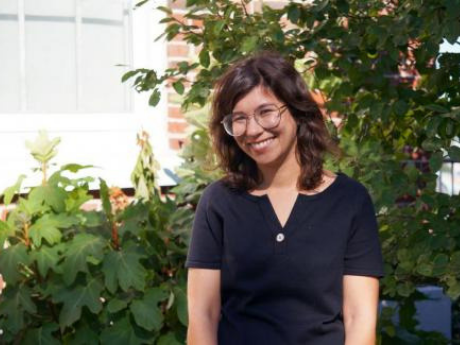 Maybe because I taste the dirt and am disquieted
by all I eat, knowing it came up through the earth
feeding on trash and watered by murderous
torrents, knowing its hardness by how it survived
to blossom on unstable plates that grind and slough,
like dead skin from a snake, whole houses
from their beams. Maybe because sex is a closed set
of eerie scenes, the senselessness of being eyed
and sidled through as a wall is by a ghost.
Maybe this is why I've never known
any nature but the ruthlessness with which I stay
upright. How I have killed to live and live
like this, unwell, unwelcome and unmoored and still
I have killed for it and would again. Once in a hall
built on a burned park where nothing grew,
I watched a staging of Macbeth. A child
was derided as an egg, and then they took his life,
and from my seat in the sloped corner, I saw the actual
boy was hurt in the stunt. I shrank away.
I never touch the blood of others. Only after the room
flashed on and the stage was cleared of flags and axes
did I approach. I stopped at the small ditch
where the orchestra sits when music is required.
Several stragglers were there. A rope hung on posts
across the top, and we all stood clutching it
like schoolchildren together holding a python.
Later, at a trestle shut for repair, I thought of the heft
of the rope in my hands and how I could
slip under. I wanted none of it, and nothing other.


From No Object (Saturnalia Books, 2013). Reprinted with the permission of the author

On "Flags and Axes"

My friend was at work when a visitor to the building began to cough up blood. Medical help came quickly with no heroic measures needed, but the whole situation prompted a what if conversation among my friend's colleagues about deficiencies in their office emergency kit, which failed to contain a particular kind of transparent mask. The mask would have allowed someone to administer CPR without risking contraction of a disease, relieving a would-be rescuer of a tough choice. Despite the consensus that the mask should have been on hand, my friend remained blasé about its absence. He later told me he couldn't imagine ever being so committed to a generalized fear of blood borne illness that he would fail to resuscitate someone in need.

This poem, which came in part from that conversation, is intended as a meditation on self-preservation, an instinct I have been guilty of many times. Can I say that? Guilty? Of an instinct? I'm unsure here, just as I'm unsure why, exactly, I have been in my life so hell-bent on still living. (See here the maybes at the start of the poem, half-baked answers to this foggy question.) What I do know is that I am a self-preserver of the highest order. For a long time, I couldn't stop thinking about Macduff's son, having seen him seized from behind and stabbed in pantomime during a ramshackle but convincing production in a park. I remembered once being grabbed in this same posture, hard bar of a forearm against my throat, and having the fierce and immediate thought, I am willing to kill to be let go.

In the end, while I can't actually say I've taken a life in my own defense or refused aid to a bleeding neighbor, I worry that I would if circumstance conspired. Or am I proud that I might? In the poem, I've conflated a set of pressing moments in an effort to find out. Though the Macbeth I saw with my real eyes was staged outside, I set the imagined Macbeth of the poem in a theater. I thought it might be right to close with the slight horror I've had on encountering the funereal landscape of an orchestra pit, the plush-lined rut of it with the rope around it. The cut-out of a train track puts me similarly in mind of interment, spurring me each time to pick up my body, mad with life, and back away.