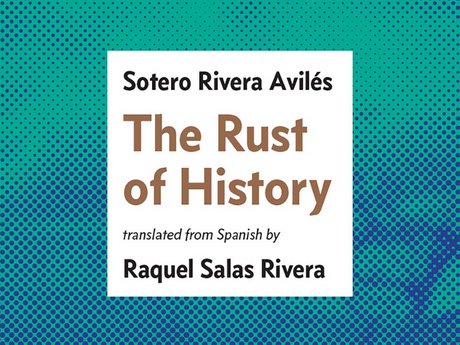 The Dark Town
translated from Spanish by Raquel Salas Rivera

(Look at the market, the green greengrocer,
look at the broken charcoal burners.)

Schoolboys invade the air;
Start charging against the sun,
with tender hibiscus and rose apple faces,
discussing their loves and latest angsts.

. . . And the factory women
with their best gossip
and those who speak of schools
muzzling vainness.

This is how the town put its darkness aside—
with its early dog ​​pack of varied events
barking at the sick or jíbaros meek.

Still, the day rolls on
and the roads
start dying like pale children
bit by bit gnawed by a thick fever.

Afternoon arrives and night hangs
its yellow mosquito nets,
and all that had previously foretold
a town headed toward infinity,
dies in a difficult
smell of rowdy cinema
and bitten cafetines, with men
that only speak of fun times
with women open
to hotels or the ship -filled shore
or the shores of ships.

The youngest will give out kisses at the movies
or on unattended benches,
and not even those who are banned
will squeeze their hearts modestly
when meeting in corridors or halls.

The disorderly cinematheque
where couples flee to touch bodies
and loners get carried away
with what never happens.

The market, the hardware stores,
the melancholy hospital with its patients,
but doctorless in the drowsiness of mountains.

Heat, terrible poverty,
the slow passage of time,
prison as punishment for the man
who never befriended the police.

All this liquefies my soul,
covers me with scouring pads,
with viscous, fetid matter,
with nuisances, with serpents, with fatigue,
with a sad sadness like tombs,
my grief's handwritten inscription.

What deceit, my Town,
are your places of offering,
where only those
who disrespect or misuse
the word Culture
climb to the podium.

Where, where can they go,
those who cry in the rain?
Those who see that the rich only
know how to list debts for the poor,
or worry about cancer.

And the shrouded religious folk
try to escape some so-and-so called the Devil
offering mass and admonishing the weak.

Oh, my Dark Town—
guitar broken over my heart—
we've lost it all and we are left
with our absent eyes
full of shards,
like the poor eyes of the hanged poor.

I should cry for you, Town;
I should write your name every day,
drinking black coffee
and reading ancient news
in some abandoned garden.

Cry for you, for my rancor—
for my complaints anchored in your chest—;
for this forehead tied to your abandon,
and for this neglect of which I speak
only to make and do nothing.


Reprinted from The Rust of History (Circumference Books, 2022) with permission.

The work of Sotero Rivera Avilés is key to understanding how previously excluded Black and impoverished Puerto Ricans gained access to written literature through educational reforms, such as the G.I. Bill, as well as how this inclusion was ultimately conditional, forcing these writers to offer themselves up as, what Paul B. Preciado calls, experimental sites for “the new dynamics of advanced technocapitalism.” Born on April 28, 1933, in Añasco, Puerto Rico, Sotero Rivera Avilés was also my grandfather, a man who produced work that was extraordinary in its scope, most often writing in the lyrical style that was characteristic of the Guajana Group, which included writers situated between the Generation of the Thirties and the Generation of the Sixties.

Unlike other writers of his generation, he also wrote about being a post-war veteran in a rural Puerto Rican town and the broken promises of Luis Muñoz Marín’s populist modernization projects. He demystified the jíbaro archetype of the naïve, but good-hearted field laborer saved by mass migration to urban centers, such as San Juan and New York. He wrote openly about his disabilities, delved into the seldom described experiences of post-war reverse migration, and left a record of regionalisms from a world that no longer exists. His is some of the only poetry written about Humatas, his childhood barrio in Añasco, and he always insisted that the breadth of his work could never overshadow the importance of the life he led before acquiring a formal education. He has received little if any recognition outside of Puerto Rico. The first selection of his work and the first full-length translation of his poems, The Rust of History: The Selected Poems of Sotero Rivera Avilés is a recovery project that pays homage to the man without whom I would never have forged my love of poetry.

A month after my father passed away and two weeks after I started taking testosterone, and thanks to a translation fellowship from the National Endowment for the Arts, the first work I fully resumed were these translations. It felt obvious and prosaic to start here, with the figure whose tangles had defined our family, through defiance, disidentification, or partial acceptance. My hope, since I undertook this work, has been to lean into my obsession with my grandfather’s life, and accept my desire to see myself, my queerness, and my transness in his successful and failed attempts at upholding societal expectations.

Earlier, I described my grandfather’s return to Puerto Rico as a “return to a world transformed for the worse.” In some ways, my return to Puerto Rico after almost eight years in Philadelphia has felt similar. As I write this, the cost of rent in the San Juan area has significantly increased thanks to a new wave of settler colonialism that has brought many U.S. Americans here in search of gold, beaches, and paradise. Although my life and my grandfather’s life were different enough to feel foreign, in translating his poetry, I have experienced a shared sadness at coming back to a world that seems forever altered by outside forces. Unlike abuelito, I do not think of my childhood or my past, including him, with nostalgia. This project has been as much about demystifying my grandfather, through research and study, as it has been about honoring him.

I say I “resumed” this work because I had really begun these translations slightly before moving to pursue my Ph.D. in Comparative Literature and Literary Theory at the University of Pennsylvania. In fact, many early versions became part of my doctoral dissertation and led me to conduct my first family interviews and look through some of the archival materials I used for this book. It was the guidance and encouragement of my dissertation committee—Emily Wilson, Kevin Platt, and especially Julio Ramos—that convinced me I had to pursue these translations and the accompanying research. The committee was kind and critical without being harsh, and saw the shimmer in my early work. I mention this tenderness because it taught me the kind of care I should take with a history of my grandfather’s life, not just because of familial expectations or obligations, but rather because the care we take with others, our living and our dead, makes the building blocks for a better world.

These translations are also an inventory of many Soteros. Here is Sotero, the Puerto Rican poet who died of hunger in a bakery. Here, the hemorrhaging boxer with his skull cracked open by war; Sotero, with his Puerto Rican syndrome; Sotero, the fisherman swallowed by the sea before returning to Mazatlán; Sotero, Añasco’s last hanged man; Sotero, who cried over onions, dead in cold Madrid; Sotero, the satisfied patriarch of old age. This selection includes his poems and my translations; his real lives and his missed deaths. These cling with the insolvency of memorials. I have tried to the best of my ability to become proximate through interviews, research, and patchwork. One of these dead men is real, a family legend. One of these was a great orator against finality, a self-mythologizer, a poet.

Given how little time we spent together (I was eight when he passed away), I can only describe my memories of Sotero Rivera Avilés as hauntings. It is through my uncles, my mother, my aunt, and especially my grandmother, Virginia, that I have patched together different versions of who he was. My grandmother describes a yellow house by a river in Humatas. My mother swears he slept on the floor. They argue, agree, then sit in the living room confused, neither one admitting they may have forgotten. This happens on one of many trips I took to Mayagüez during these past two years in order to interview my family about my grandfather and fact check some of the stories I had heard them tell over the years. Like his memories of Humatas, my family’s memories of Sotero are plagued by nostalgia, distance, desire, and inevitable decay.

Rather than lament all loss, I have taken this as a jumping off point for a book-length reflection on the potentialities and limits of recovery projects. Some things need to be left behind and forgotten. We can’t spend our lives living under the shadows of our elders. Other things must be remembered if we are to reimagine the futures we inherit. As I understand it, the best translations do both, they release and cling in the right places. These traces that resist oblivion, must be, in the words of the poet Jack Spicer, “led across time, not preserved against it.” And, like Spicer, I speak with dead men, or at least one dead man, in order to understand how I came to poetry, why I guard the idea that something incommensurable happens in the poem. For my grandfather, poetry was when his life began, but in order to become a poet, a past self had to die in that hospital in California. A self that nonetheless haunted almost all of his poems. This is essentially a kind of transition, a kind of translation.

These poems themselves feel haunted: by the war, by his childhood, by friendships, travels, and girlfriends. In translating “Domingo sin iglesia/ Churchless Sunday,” I retrace his steps, from his artificial arm on the couch, to his backyard, to the window facing the street, and finally to the church. I retrace his movements, his gestures. He “can laugh like an aimless shoe,/ destroyed,/ thrown to nights and rain” at the “the priest and old women/ that raise their rage and destroy pulpits/ if they see too few sinners.” But my favorite gesture is his shift from commonplace artifice, which he often describes as a sort of welcome failure, to a divinity he saw as hypocritical. His artificial arm laughs because it “understands” modernity’s obsession with usefulness and goodness is doomed to ruin. It is this exhausted refusal—that of a veteran’s artificial arm— that stays with me in my recent grief. It is also this arm that I played with as a child, that he handed to me, that led me to pull at my own arm in an effort to take it off. It planted the idea in my mind that bodies were not all the same, that some parts could be made different, even removed, something profoundly radical for a young trans person to come to understand.

If the poems are hauntings, then the translations are hauntings of hauntings. The Spanish filmmaker José Val del Omar, for Variaciones sobre una granada, would take innumerable photos of a pomegranate (in Spanish “granada,” like the city of his birth) with different lenses and filters. Sometimes he’d film and then take a photo. The effect was accumulative: a phenomenological pile-up. This was his way of looking for the unity he called God, the essence of the pomegranate. Perhaps, through my translations, I am driven by a similar impossibility: the desire to sense in other languages, through other filters, my grandfather’s poems, and layer them on top of each other until he feels present.