Paige Ackerson-Kiely's “My Love is a Dead Arctic Explorer” 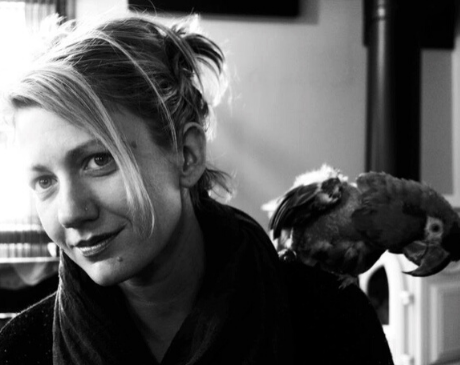 My Love is a Dead Arctic Explorer

Waiting for his love to take, I held him clumsily. His face was without form and darkness moved upon it. I was told: You must keep him still for six days. I needed to be sure he did not try to leave, so I asked: Let there be light, and the sanatorium became light and it was a soft yellow light, and good to his features. He was thirsty on the second day so I said: Let there be water apart from the earth, and a glass of water appeared at his bedside, and it was good clean water and he drank it as though its existence were not a miracle. He drank it like he was impartial to dying a general death. He drank as if I were not watching him, imagining how someday I would let him go, and it was good, good he didn't know I was already dreaming of my solitary reinvention. On day three he became hungry and agitated so I begged let there be grasses bearing seed and also some fruit from a tree as sensuous as a woman he imagines when he enters me, and thus a peach became visible and I fed him,and all in all it was a pretty good show. On the afternoon of the fourth day the beasts were called, creeping things that frightened me and fowl and cattle beneath the window of the sanatorium, grazing passively, grazing on really good grass. Day five he coughed like a badger clawing a warren where I hid, hedging my bets, living in my fur as I was granted control over all of the beasts and thus fashioned myself something warm and attractive from the rabbit. And it was good, looking good, even though I was afraid. He called out some names on the sixth morning. He said barstool and dispatch and megawatt and Thermopolis, and all of these things became as he called them and it was good, it was good to have a list. Later that evening, after he described fortitude and unctuous he said a word I had not heard before but it made my teeth ache and a slow itch spread down my forearm and I thought I felt a dainty woman wearing one of those fuzzy pastel sweaters with a plunging neckline standing close to me—her soft breath against my neck—and I wanted to kiss someone really bad but also to remain still forever so that this feeling might be known to anyone who happened upon me. He said Helper and he made a motion with his hands, like he was breaking an egg onto a hot frying pan while a hissing sound emerged from his mouth, after which he lay back on his bed with his arms thrown across his chest like dirty laundry. Although I knew not of dirty laundry at the time, I understood he was naming me and it was good. It was good to place my head in my very own hands, which were not as I imagined them—hatch batten downers, Pious, wincing shovels—but as he named them: Your Hands. And with this knowledge I rested. I dreamt sweetly.

Poem reprinted from My Love is a Dead Arctic Explorer (Ahsahta Press, 2012). Reprinted with the permission of the poet.

On "My Love is a Dead Arctic Explorer"

Mostly, for me, writing is a feral act. Mostly I am consumed by a hunch, irritated, harassed or made uncomfortable by something I can only clumsily accuse. I approach images and words as though they are a criminal or maybe just a far-flung snarl, and maybe that snarl is coming from me—I don't always know, though mostly I am the only one in the room. Anyhow, I'm not interested in judgement, but I do like the process of arrest. I like the pat-down, the suss-out. I like to get to the bottom of a motive, or at least view it from a new angle so that I may stop the way it stalks or occupies me and get back to my ordinary life with all its attendant desires and triumphs. Usually I am surprised by my findings. Surprise is radical. This gentle policing has been my process for several years because it is most urgent and thus easiest to access.

I chose this poem even though it is not particularly representative of the book. It's the title poem, sure, but the title could be transposed onto many of the poems found therein. I chose this poem because I have one or two cogent things to say about its origin.

My Love is a Dead Arctic Explorer the manuscript began as a book-length response to Admiral Richard E. Byrd's memoir, Alone. I had thought the entire book might be dedicated to exploring the notion of exploration, but it didn't end up that way, for a variety of reasons. This poem was one of the first I composed, way back in July 2007, in the throes of a heatwave at the Jentel Colony in Wyoming, a fantastically supportive and wild place.

Writing delicate snow poems just wasn't happening in 100°F—I was desirous of cold, too desirous—and exploration is more than desire, it is necessary. I remain steadfast in this belief. What could I do to allay the uncooperative weather but take a more general approach to Byrd's work? Why was I so moved by polar exploration, and what was I trying to say about these books that had moved me so, provided pleasure by the shovel-full over the years? What I came up with was simple: Gratitude.

In this poem I attempt to discuss, through a conflation of creation myths, the idea of being formed by literature. One fact of my life—and probably the lives of most people reading this—is that I have often been consoled by books, have found a life for myself within those pages, when that sort of life was not available to me on the outside. The accretion of narratives, overtime, gave me a shape I was comfortable living in. The act of reading provided an architecture previously unknown—with every book, a new window for looking out. I wrote this poem hoping to describe the responsibility of the reader—to suspend, to remain open and calm—and the responsibility of the writer—to create the reader, to provide the reader with a body—and to celebrate, however quietly, the end result.