Home > Poems & Essays > In Their Own Words > Rosalie Moffett on “[In the womb we watch our eyelids. This is enough]”

Rosalie Moffett on “[In the womb we watch our eyelids. This is enough]” 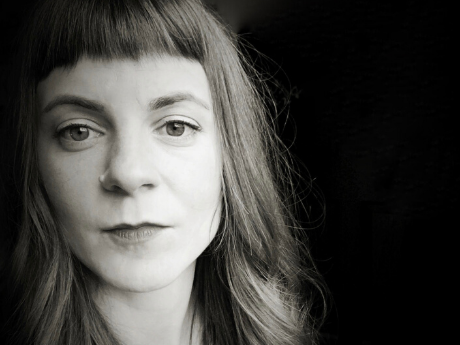 [In the womb we watch our eyelids. This is enough]

In the womb we watch our eyelids. This is enough
to blaze a pathway
in the brain, wiring it in anticipation

of light. A warm-up act.
The neurologist says, The world must be dreamed
before it can be seen—

Which has its pithy ring. But of what, these dreams?
The brain doesn’t need much
of the world, it seems—restless visual cortex

rehearsing in the mind’s
dark theater. What does that do—
what does it do

to write this? Field of tall grass, ventured through.
Catalog of damage, pre-fathomed
as practice, to the one who once shielded me

in her body
like a lit match. How she glows
now in the MRI, does not give up

the secret of her brain’s fumble for words,
or her spasms
ike a Mexican Jumping Bean. I can’t get that

phrase out of my mind.
I know now what hides, what jumps: larva,
blind inside the bean,

jolts in the heat of the palm, chews
a hole in the bean’s husk
and seals it up with silk. Next, a moth, mouthless,

it’ll just butt its way out,
new into the world of air we must assume
it has foreseen.

But what do I divine about what transformation
comes next, given her mouth,
wordless, and the way the air

seems to reach out
and shake her?

From Nervous System (HarperCollins, 2019.) Reprinted with the permission of the author.

On [In the womb we watch our eyelids. This is enough]

The book, Nervous System, in which this section appears is both one long poem and a collection of pieces. It is a book about my mother, a book about inheritance, and an interrogation of how we come to think we know a thing. It was written out of the need to render the mysterious mechanics of the brain in a way that made sense to me, a need that arose from my experience as the daughter of a neurologist who suffered from a neurological illness that affected her memory and her ability to produce language.

One of her symptoms has been spasms. My father said once, while throwing up his hands, It’s like sleeping next to a Mexican jumping bean! Later, coming back to this bit of language, I realized I didn’t know what a Mexican jumping bean was, or if they were even real. I looked it up and learned that a certain kind of moth larvae tunnel into a certain kind of seedpod where they go into the pupal stage. (They were sold as a novelty for they way they move when held—they are sensitive to heat, so the pod seems to jump as they try to get to cooler ground.) They emerge as moths through a “trapdoor” they leave in the seedpod’s husk, a semi-circle they chew and then seal with silk. This is because as moths, they no longer have mouths to chew their way out, but can push open the trapdoor.

This seemed extraordinary. On top of confronting the process of turning to liquid on the way to turning to moth, I wondered if, after metamorphosis, a moth remembers its previous form. If it can imagine, as a larva, what is in store for it. Flight and air. It must. That trap door.

This idea of the Mexican jumping bean, the result, really, of an off-hand comment, got its hooks in me. There was something about the mouthlessness of the moths that connected to languagelessness, something about the way that the word moth is almost mother. That blind jumping and the spasms. This was all mixed in with considering, with an oddly new awe, my mother who, of course, fabricated me in her body. That dark space where I came into being, suddenly seedpodlike to me. This was even before I read the New Yorker article (which I can no longer find) about the development of the brain in the womb, that dream of the light-filled world. Anticipating it.

This book shares a borderlands with memoir, and when I have taught creative non-fiction in the past, one of the questions I tell my students to answer on the page is Why am I writing this? Or, in other iterations: Why do I remember this? Why am I bothered by this? This, an exit ramp that leads from recounting into thinking. In writing this book, I sometimes got stuck recounting. And, too, I wanted to know why I couldn’t write just one poem and be done with it. In my first book, June in Eden, there is a poem, “Spasm” in which the Mexican jumping bean appears—but I meant the whole book-project. Why had this experience, my mother’s more than my own, taken hold of me? Thus: “What does it do / to write this?”

In a way, the answer to that question is that the book is its own kind of anticipation, its own view of eyelids-in-the-womb. The unfathomable, or almost unfathomable future: what neurological illness I might inherit. What the world will be without my mother. What a metamorphosis death might be.