Home > Poems & Essays > In Their Own Words > Sarah V. Schweig On “Contingencies” 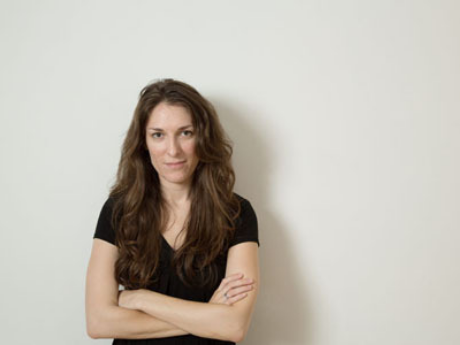 Someone in this city calls himself the Latin King.
Kids who break the law are called Delinquents.
The Law is a set of rules, always slightly changing.
To Break is to inflict a kind of change on a thing.
Across the city the Latin King is spray-painting
his pseudonym. Juvenile Delinquents blot it out again.
(Beautification.)

This is a treatise on BLANK.
Had the phrase OFFICES OF RAIN meant anything,
ALL LIGHTS ARE ON IN THE OFFICES OF RAIN
would have suggested that it is raining.
In this treatise, suggestion carries agency.
It is now raining. I am walking through it.
I would like to say AND THEN, but I am merely
continuing. That the rain will end, I'm fairly certain.

The rain has ended. Juvenile Delinquents
enlisted by the city to blank out the sign of the Latin King
are dressed in white smocks. They are kids. Sometimes they are
known as Black or Latino. Today, into white paint, they
dip rollers. I am White and have just been walking through rain.

This is a treatise on BLANK. I would like to include the Idea,
sometimes known as Image, of replacing Chandeliers with
Lampshades. Two friends make this decision. They resist
the perceived opulence of their new house on Hall Street
(Gentrification). They turn light on and off by a switch.

This is a treatise on BLANK. Replacing OFFICES OF RAIN with
TEMPLE OF STONE, I am breaking this treatise.
TEMPLE OF STONE means something, as I stood in it
yesterday.

Juvenile Delinquents have finished repairing harm to the city
and have gone home. This city feels empty when it empties
even slightly. This could mean Plenitude is a Precondition
for the city I call Home.

Yesterday,
in the TEMPLE OF STONE, we were telling stories.
This was the meaning of standing in that building at that time.
The stories were about a man. The Telling Of Stories occurred
on the occasion of that man entering, suddenly,

BLANK.
What is the meaning of this?
Had I known, I would not have begun it. I am walking through it
to understand. Matter becomes Boy becomes Man becomes
BLANK. This is how I understand it. The city feels empty
because it empties. I would like to say Beauty
where there is a BLANK. I can't. This was a treatise
on Meaning. This is the end of Treatise.


From Take Nothing with You (University of Iowa Press, 2016).  All rights reserved. Reprinted with the permission of the author.

"Anything can happen at any time."

Iris, my asthmatic, elderly landlady, was standing crouched over in the doorway of the apartment I was living in when she said this. Wheezing between every few words, wearing a dress that hung off her thin frame like off a clothing rack, she was only talking about the sink leaking water behind the walls, but her wide and worried eyes underscored everything with a kind of desperate gravity.

"Anything can happen at any time" smacks of the obvious rather than the profound, but the phrase, and that moment, has stuck with me. Of course, I know that anything can happen at any time. But knowing is so different from feeling. Knowing is different from edging our way up to the real meaning of a phrase, feeling that meaning acutely, toeing that edge around the utterly arbitrary and accidental fact of our being here, in this world of accidents.

When I was writing "Contingencies," I was living elsewhere, in a tiny studio, leaving Iris two years and twenty blocks behind me. I was falling in love with the man who would become my husband, but I wasn't thinking of him. I was looking at the distant skyline where I could see the new tower in lower Manhattan being built every day in tiny increments, but I wasn't thinking of that.

I was thinking of the deputy director of the criminal justice think tank where I was working then. Every day I would walk past his office on my way home at exactly 5 pm. I did this one night in January, passing by his open office door the way I had for three years. His door was always wide open, and only sometimes would I say "good night." I don't remember if I said it that night.

A few hours later, he died.

The next morning I came into the office to find utter silence, no one at their desks, no one in the hallway. In an email I learned that Alfred had had a heart attack and was now gone.

The conference room where one logistical meeting after another was usually held was transformed to this stunned place where we gathered in our speechlessness, where we tried to comfort each other even though we'd never seen each other cry.

It wasn't my first loss, and it wasn't my closest. It almost seems absurd that I'm still thinking of it now, but I'm trying to explain the genesis of "Contingencies" and I cannot explain it without Alfred, and the blank space he so suddenly left.

These sentences, trying to outline a sensical narrative of the process of the poem, don't quite reach it.

But I do think "Contingencies" manages to speak from that stunned empty-­place, where fear and tenuousness is so persistent and pervasive it works as anesthetic. This is not a place where poetry easily lives. One feels no pain in this place. One feels nothing at all. Without drama, without irony, without adornment, "Contingencies" wants the disparate facts that surround us to stack upon each other until they can't help but reach the stunned empty­-place, and reach us there, where I find myself standing more and more and more.

Take Nothing with You
(University of Iowa Press, 2016)