Tarfia Faizullah's “Aubade Ending with the Death of a Mosquito” 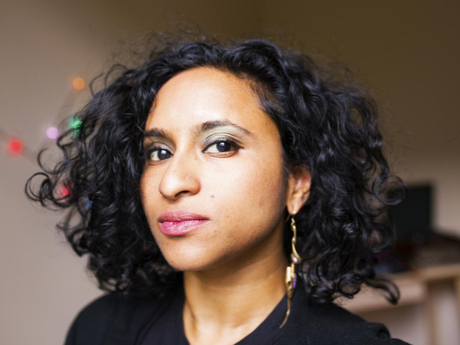 Aubade Ending with the Death of a Mosquito

Let me break
free of these lace-frail
lilac fingers disrobing
the black sky
from the windows of this
room, I sit helpless, waiting,
silent—sister,
because you drew from me
the coil of red twine: loneliness—
spooled inside—
once, I wanted to say one
true thing, as in, I want more
in this life,
or, the sky is hurt, a blue vessel—
we pass through each other,
like weary
sweepers haunting through glass
doors, arcing across gray floors
faint trails
of dust we leave behind—he
touches my hand, waits for me
to clutch back
while mosquitoes rise like smoke
from this cold marble floor,
from altars,
seeking the blood still humming
in our unsaved bodies—he sighs,
I make a fist,
I kill this one leaving raw
kisses raised on our bare necks—
because I woke
alone in the myth of one life, I will
myself into another—how strange,
to witness
nameless, the tangled shape
our blood makes across us,
my open palm.

From Seam. Reprinted with permission of the author. All rights reserved.

Tarfia Faizullah's debut collection of poems Seam is largely an homage to the 200,000+ Bangladeshi women who were raped during the country's 1971 Liberation War. In Seam, Faizullah traverses the boundaries between what can and cannot be said (and by whom). The narrator presents color-filled, motion-filled, pain-filled imagery to thrust the reader into each situation presented. "I became all that surged past / the busy roadside markets humming with men pulling rickshaws / heavy with bodies." Seam by Tarfia Faizullah is a stunning debut collection of poems!

Tarfia Faizullah on "Aubade Ending with the Death of a Mosquito"

This poem is a contrapuntal, which means it can be read three different ways. Musically speaking, a contrapuntal imposes two or more distinct melodies upon each other simultaneously, and in doing so, creates a brand new harmonic relationship.

The year I spent in Bangladesh, where I wrote this poem, was the year I began to see the shape of myself emerge. I was displaced in a country that was too familiar to be foreign. I was researching the 1971 Liberation War in which Bangladesh won its independence and I was interviewing its female survivors. I was sitting in the waiting room of a hospital late at night, waiting to hear news about a sick uncle. I was wishing I had someone nearby who I didn't have to explain myself to. I was longing for my sister, who was a child when she passed away over twenty years ago.

In terms of poetry composition, the contrapuntal relies on both poems working as distinct entities as well as in conversation with each other. The third poem that emerges is one that results from the movement back and forth between the two poems.

It took a few drafts to realize that this poem was a contrapuntal, that there were multiple tensions trying to resolve. I wanted to write a poem that could contain the individual emotions I felt that night. "Aubade Ending with the Death of a Mosquito" was written in the intersection of many borders: in a waiting room poised in the present moment, waiting to dive back into the history of the past so that I could write what I learned into the future.