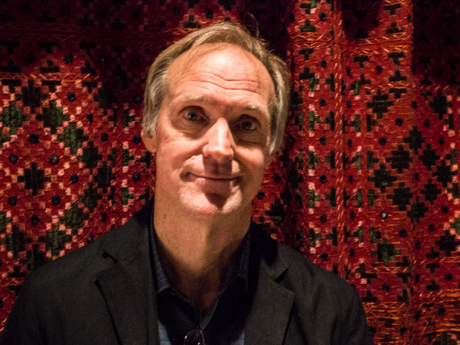 Over by the cemetery next to the CP
you could see them in wild catmint going crazy:
I watched them roll and wriggle, paw it, lick it,
chew it, leap about, pink tongues stuck out, drooling.

Cats in the tanks' squat shadows lounging.
Or sleeping curled up under gun turrets.
Hundreds of them sniffing or licking
long hind legs stuck into the air,

great six-toed brutes fixing you with a feral,
slit-eyed stare...everywhere ears twitching,
twitching as the armor plate expanding
in the heat gave off piercing little pings.

Cat invasion of the mind. Cat tribes
running wild. And one big pregnant
female comes racing through weeds to pounce
between the paws of a marble dog

crouching on a grave and sharpens
her claws against his beard of moss
before she goes all silky, luxuriously
squirming right under the dog's jaws,

and rolls over to expose her swollen belly.
Picture her with gold hoop earrings
and punked-out nosering like the cat goddess Bast,
bronze kittens at her feet, the crowd drinking wildly,

women lifting up their skirts as she floats down
the Nile, a sistrum jangling in her paw.
Then come back out of it and sniff
her ointments, Lady of Flame, Eye of Ra.

Through the yard the tanks come gunning,
charioteers laughing, goggles smeared with dust
and sun, scattering the toms slinking
along the blast wall holding back the waves

from washing away white crosses on the graves,
the motors roaring through the afternoon
like a cat fuck yowling on and on.
The gun turrets revolving in the cats' eyes

swivel and shine, steel treads clanking,
sending the cats flying in an exodus
through brown brittle grass, the stalks
barely rippling as they pass.

After the last car bomb killed three soldiers
the army website labelled them "martyrs."
Four civilians killed at checkpoints. Three on the airport road.
A young woman blown up by a grenade.

Facts and more facts...until the dead ones
climb up out of the graves, gashes on faces
or faces blown away like sandblasted stone
that in the boarded up museums'

fractured English "leaves the onlooker
riddled and shaken, nothing but a pathetic gaping..."
And then I remember the ancient archers
frozen between reverence and necessity—

who stare down the enemy, barbarians,
as it's told, who nailed sacred cats to their shields,
knowing their foes outraged in their piety
would throw down their bows and wail like kittens.


"Army Cats" was originally published in The New Yorker. All rights reserved. Reprinted with the permission of the author.

"Army Cats" is the title poem of a book that will appear next spring. It comes out of a trip I took in the summer of 2007 when I went to Lebanon and Syria to do some journalism about Palestinian refugee camps, and the aftermath of the 2006 Lebanese Israeli War. I arrived just at the moment that the worst internal violence since the 1975-1990 Lebanese War broke out. I'd never been in a place where bombs were literally going off all around me, or met refugees and listened to their stories, or understood the profound difference between an emotion like grief—relatively easy to empathize with—and an emotion like grievance, a far more complicated emotion springing from grief, but also compounded of anger, and a longing for revenge.

Robert Frost wrote, "Politics is an extravagance, an extravagance about grievances. And poetry is an extravagance about grief." I think you can sense in Frost a kind of skepticism about grievance, as if grievance as a source for poetry were too partial of an emotion, too self-limiting, in fact too self-interested to reliably express the full range of a person's experience. But while I share Frost's suspicion, in the hard conditions in the Palestinian camps that I visited, there's something a little luxurious about being able to decouple politics and grievance from poetry and grief.

Similarly, W.B. Yeats once said that his goal in writing poems is to "hold reality and justice in a single thought." I suppose I'm taking his lead—only I want to hold grief and grievance not in a single thought—that's way too confident for what I saw—but in a music of clashing tones.

What happened was this: I had to go to the military base in Sidon to get clearance to go farther south where most of the fighting took place. As I crossed the yard of the command post, I could hear the armor of the tanks expanding in the heat and giving off little pings. And everywhere I looked, there were shadows, moving shadows lounging under and on the tanks—and then one of the shadows came out into the hot noon sun and I realized that the shadows were in fact stray cats sheltering in the tanks' shadows.