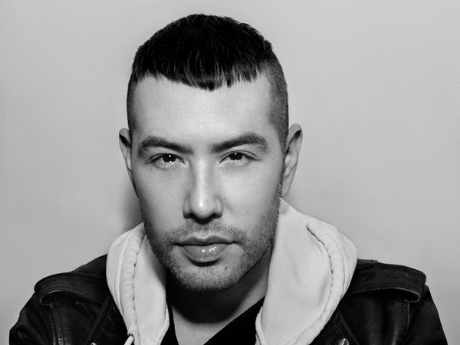 I'm scared
of watching movies
under a down comforter
in the summertime,
w/the undercurrent of AC
Being squeezed every now
n again so good
by Muse who breathes
deep, but barely knows me.
Don't fall in love Don't fall
in love Don't fall in love
with Muse, duh! Muse is
embodiment of abstract
concept: Art, dance,
astronomy, drama, heroic
poetry, security, good/god, edible
underwear, pepperoni pizza, Jim
Beam. You touch
his shoulder and he
scoops. Stab. You can't hold
Muse because yr
the side piece. Art is Muse's
main squeeze. It's hard
enough just not being
muserable I had a
vision of love You can't
own Muse. Muse pwns
you Surrender implicit
in yr relationship. When Muse
is done, Muse leaves. You
are in a shawl by the fireplace,
rocking alone
again.
It's important to be alone
again.
Just what is so scary abt
the cave? I… I can hear
my heart beating in there
and I don't like it.
In an effort to connect,
fingers will click open
more and more tabs.
People say there are three
Muses or nine sometimes
six or eight but
we're friends now,
Imma crack open
the mythology for u—
Really there are four
states of Muse:
Solitude
Intimacy
Anonymity
Reserve
Solitude carries a deck
of cards. Intimacy brought
lube. Anonymity is here
I think. Reserve gives gift
certificates. Obviously.
The influence of Muse
is not unlike being under
the influence, the way a poem
is spontaneously drunk
on Robert Graves. The
implications of Muse pop
fizz in all directions: photography,
printing press,
telephone, flash fry, cave etc.
The temple of Muse
is all around you. Don't patronize
me, tradition
is a cage Conflict constant The
argument to post will take
more on and more alluring
forms. Muse must be chased!
Vigilance is all that stands btwn
us and a police state Tell me
as I switch between lenses—
which is clearer: A… or B. One
more time? Okay, A… or B.
I can't ever see
where I stand in the lineage
of art, but I find being alone
maxes out my HP really
makes me kinder: Gap
btwn talking to mom vs
talking to mom
Muse used to mean
purpose in being
alone—Muse is romanticized
by the idea of possession and lord
knows I can't live unoccupied.
Information technology tastes
more and more like pink marshmallow
Peeps n all my relatives
are diabetic The metaphors
age well Are rent stabilized
Take on new shapes There
is a great flood
in the world of my head
The waves—Now IMHO Muse
grants you the right
not to festoon yr alone
onto the feed. Whatevs, discretion
is alienating Intimacy takes
too damn long And third thing.
I love a good boast
like I love a god good gossip:
I am so good at being Alone.
All I need is my phone.
Subway, elevator, drifting off
in a convo—no one really seems
to notice, occupied by their own
gleaming pod of longing.
I am the captain of my shit,
possessed by the spirit
of Instagram I am omnipotent
on Twitter on Blurb on Vine
Soap boxes on the street corner
of my mind Clear, boosted, boundless
something come stop the shaking
A sun to fly towards iMean
something to do: mimicry
of purpose. The injury
of hunger is: death. The word
of the day is: Gloze.
To explain away.
Glowing gauze glozes the
etc. Weather.com says
Stay inside forever, or
drop dead. We've ads
for you to click. You n me?
It's going to take soooo long
for us to know each other
ten years.

From IRL (Birds LLC, 2016). All right reserved. Reprinted courtesy of the author.

It was the summer and I was reading The White Goddess by Robert Graves (mostly to get sleepy) and thinking a lot about my competing desires to go to the beach or the river or a rooftop, vs needing to be alone to write this book. It meant, like I think it means for most people, also having to turn off the Internet. Mostly because in order for me to make something I have to be totally alone, but my smart phone—like religion—has miraculously made it possible to never feel alone again ever. Thus in a way, the Muse of IRL also became Privacy, and Privacy has four states: Solitude, Intimacy, Anonymity, and Reserve.

What's so scary about being alone, other than coming to terms with your own network of arteries and how they'll at some point go cold? Honestly, the declining state of modern privacy makes me hella nervous. A part of me feels the impulse to post crap online because of the immediacy of that attention, but there's another part of me concerned with being a good friend, a good partner, and a good writer. They aren't necessarily mutually exclusive, but I don't think any of my deeper/latter concerns are a) helped by likes, b) anybody else's business, or c) up for public consumption. Even writing and sharing this I know I'll be refreshing to evaluate my confidence. But it's so fleeting. In an effort to create a more lasting source of achievement and significance, I had to be a-fucking-lone

What this section also allowed me to pursue was a polyphonic tone that had been hinted at earlier in the poem but I got to articulate differently here. Some of the other voices are in italics, some not, but I wanted to give the reader an idea of how indecision works in the mind of this particular character. It's not that he wants to be static or indecisive or self-harming. It's just that there are competing sources of what could be characterized as "instinct" as there are competing sources of attention. People are like, "trust yr gut!" but it's hard sometimes to hear where that comes from.

Also the occupation isn't only technological—it's also European invasion, the invasion of English, and of Christianity. The character is affronted by the ways he's been twisted, and perhaps some knots can't be undone. A good friend of mine recently gave me the advice, "don't cut what you can untie." So what do you do when you can't undo the knot, but you also don't want to cut yrself out of life? You try to find a beauty in the complication. You make a monument to it. You do it for like a hundred pages and maybe get some Cool Ranch Doritos on the way home.