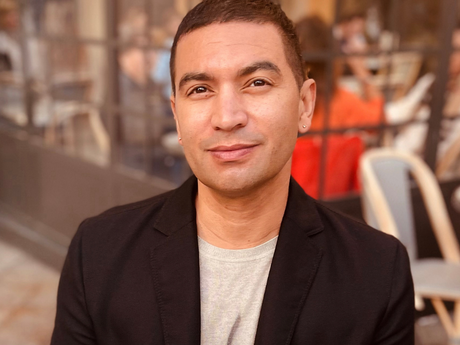 Looking for The Cantos in Texas (excerpt)

There's jake leg blues
in this box. There's carnal
scribbling: a constellation
of bug prints in a gypsy's
biography—loose-leaf, crayon
etchings and the sun shining
on my back door some day.

Tommy Johnson, forget
about air. Ignore the wind,
shimmying with seeds
and hair. But take a nail
and a seed and I'll whittle
a twelve-string that only plays
cranial propositions.

A six-string is trouble,
but the twelve is the most hoodooed
mess in nature—the noise
in adverbs making spiders
grow at unnatural speeds.
The pop and settle of this attic
as it ages with arthritic grace.

Orthography of dialect, jawboning
in the glare of half notes, shoe polish
strained through bread in a glass,
and the torso of bass topography.
Think of prohibition-bound
Tommy Johnson, gut splayed
in abdomen:

Woke up this morning
with canned heat on my mind.
Mama, mama, mama,
canned heat is killing me.

" Looking for The Cantos in Texas" (excerpt) by Adrian Matejka. All rights reserved. Reprinted with the permission of the author.

I can't help but admire Pound's audacity: the audacity to manifesto what types of poetry were successful and what weren't, the audacity to obsess over The Cantos without regard to who might read them. Even with his shortcomings as an individual, he was a rare combination of poetry and critique. Pound's conventional verse is not very interesting, but The Cantos—at least the ones that aren't tête-à-tête-ing with his storehouse of extra languages—are a marvel. He appropriated a form that was as wide open as his ego and licensed himself to write whatever he wanted, regardless of subject, language, or history. He created a modern epic using only his ideologies as connective tissue. The cantos that succeed are usually those that work outside of Pound's personal history. "Canto II" uses image as motor and music as juice in the same way Pablo Neruda or Federico García Lorca used unimaginable visions to make poems swing. Moments like "ear, ear for the sea-surge" and "the swimmer's arms turned to branches" make me forget Pound the Person and force me to dialogue with Pound the Poet. "Canto II" begins "Hang it all, Robert Browning," and reflects Pound's Imagistic notion that rhythm is a means to "compose in the sequence of the musical phrase, not in the sequence of a metronome." I wrote "Tommy Johnson" in response to these musical phrasings. The poem is meant as signifying, a kind of "your momma" to The Cantos as form and execution. I can't begin to understand Pound or the things that moved him, but I thank him for the possibilities opened by The Cantos.

by Ezra Pound
Hang it all, Robert Browning,
there can be but the one "Sordello."
But Sordello, and my Sordello?
Lo Sordels si fo di Mantovana.
So-shu churned in the sea.
Seal sports in the spray-whited circles of cliff-wash,
Sleek head, daughter of Lir,
eyes of Picasso
Under black fur-hood, lithe daughter of Ocean;
And the wave runs in the beach-groove:
"Eleanor, έλένανς and έλέπτολις!"
And poor old Homer blind, blind, as a bat,
Ear, ear for the sea-surge, murmur of old men's voices:
"Let her go back to the ships,
Back among Grecian faces, lest evil come on our own,
Evil and further evil, and a curse cursed on our children,
Moves, yes she moves like a goddess
And has the face of a god
and the voice of Schoeney's daughters,
And doom goes with her in walking,
Let her go back to the ships,
back among Grecian voices."
And by the beach-run, Tyro,
Twisted arms of the sea-god,
Lithe sinews of water, gripping her, cross-hold,
And the blue-gray glass of the wave tents them,
Glare azure of water, cold-welter, close cover.
Quiet sun-tawny sand-stretch,
The gills broad out their wings,
nipping between the splay feathers;
Snipe come for their bath,
bend out their wing-joints,
Spread wet wings to the sun-film,
And by Scios,
to left of the Naxos passage,
Naviform rock overgrown,
algae cling to its edge,
There is a wine-red glow in the shallows,
a tin flash in the sun-dazzle.

"Canto II" (excerpt) by Ezra Pound from The Cantos. Copyright 1934 by Ezra Poun. Reprinted with the permission of New Directions Publishing Corp.