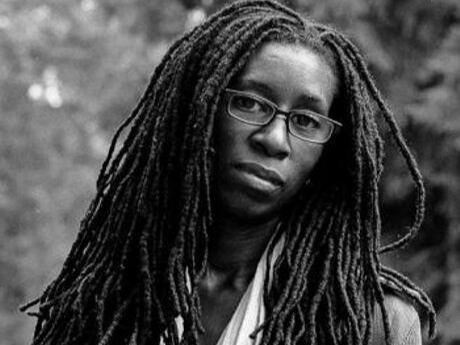 Fear glistened
In the sweat
On my skin
Until it dried
And cracked
And darkened
My Father,
Save me!
Hovered
In humid air
Hung there until
The brown bark
Of prayer
Encased me
This is
What passes
For safety
Now stillness
Settles on me
Like long vines
And silence
Entwines me
Rooted
Mute.

"Daphne" from Black Swan. Copyright 2002 by Lyrae Van-Clief Stefanon. Reprinted with the permission of the author.

I cannot remember the first time I read "Poem about my Rights," but the fact of it sustains me. Each reading reaffirms for me what one student, in the Auburn prison workshop where I teach, so eloquently noted in the closing line of a piece he wrote: poetry exists. And I am free to exist also. In a world that suggests otherwise, I am free to fiercely say myself for myself. Jordan writes:

I am not wrong: Wrong is not my name
My name is my own my own my own
and I can't tell you who in the hell set things up like this
but I can tell you that from now on my resistance
my simple and daily and nightly self-determination
may very well cost you your life

In my life, as on the page, Jordan's words weave through oh so many simultaneous narratives. I hear the urgency of its opening—Even tonight—even now. Writing Black Swan, I needed the rolling righteous indignation of her lines, the refusals irrevocably grafted one to another, all in a voice, a tone, an accent that felt an open door for me, and none of it academic: poetry like bread, and that not unleavened. I was meditating at the time on three, for me, interestingly linked narratives; ideas, I felt, that needed to be in conversation with each other. The first was Helen, the face that launched a thousand ships, from classical mythology. The second, a line from Rilke's first Duino elegy—Beauty is nothing but the beginning of terror. The third was a story I'd heard about the Ibo, during the Middle Passage, turning around and walking home rather than becoming slaves in America, the idea of a "no" that powerful. Jordan's poem became, for me, access to that "no." I could snatch it, along with "beauty" and "terror," and turn around again, catch someone off guard with it, say not only will I not be a slave, but give me this damned country. For many years, "Poem about my Rights" was the only poem by June Jordan I'd ever read. It was the only one I needed. Even now, writing Open Interval, a manuscript about my name, preoccupied with the universe and galaxies and what I think of as the quantum physics of identity, I return to it. It is a place I go, thinking about the world/all of it disclosed by the stars and the silence.


Poem about My Rights
by June Jordan

Even tonight and I need to take a walk and clear
my head about this poem about why I can’t
go out without changing my clothes my shoes
my body posture my gender identity my age
my status as a woman alone in the evening/
alone on the streets/alone not being the point/
the point being that I can’t do what I want
to do with my own body because I am the wrong
sex the wrong age the wrong skin and
suppose it was not here in the city but down on the beach/
or far into the woods and I wanted to go
there by myself thinking about God/or thinking
about children or thinking about the world/all of it
disclosed by the stars and the silence:
I could not go and I could not think and I could not
stay there
alone
as I need to be
alone because I can’t do what I want to do with my own
body and
who in the hell set things up
like this
and in France they say if the guy penetrates
but does not ejaculate then he did not rape me
and if after stabbing him if after screams if
after begging the bastard and if even after smashing
a hammer to his head if even after that if he
and his buddies fuck me after that
then I consented and there was
no rape because finally you understand finally
they fucked me over because I was wrong I was
wrong again to be me being me where I was/wrong
to be who I am
which is exactly like South Africa
penetrating into Namibia penetrating into
Angola and does that mean I mean how do you know if
Pretoria ejaculates what will the evidence look like the
proof of the monster jackboot ejaculation on Blackland
and if
after Namibia and if after Angola and if after Zimbabwe
and if after all of my kinsmen and women resist even to
self-immolation of the villages and if after that
we lose nevertheless what will the big boys say will they
claim my consent:
Do You Follow Me: We are the wrong people of
the wrong skin on the wrong continent and what
in the hell is everybody being reasonable about
and according to the Times this week
back in 1966 the C.I.A. decided that they had this problem
and the problem was a man named Nkrumah so they
killed him and before that it was Patrice Lumumba
and before that it was my father on the campus
of my Ivy League school and my father afraid
to walk into the cafeteria because he said he
was wrong the wrong age the wrong skin the wrong
gender identity and he was paying my tuition and
before that
it was my father saying I was wrong saying that
I should have been a boy because he wanted one/a
boy and that I should have been lighter skinned and
that I should have had straighter hair and that
I should not be so boy crazy but instead I should
just be one/a boy and before that
it was my mother pleading plastic surgery for
my nose and braces for my teeth and telling me
to let the books loose to let them loose in other
words
I am very familiar with the problems of the C.I.A.
and the problems of South Africa and the problems
of Exxon Corporation and the problems of white
America in general and the problems of the teachers
and the preachers and the F.B.I. and the social
workers and my particular Mom and Dad/I am very
familiar with the problems because the problems
turn out to be
me
I am the history of rape
I am the history of the rejection of who I am
I am the history of the terrorized incarceration of
myself
I am the history of battery assault and limitless
armies against whatever I want to do with my mind
and my body and my soul and
whether it’s about walking out at night
or whether it’s about the love that I feel or
whether it’s about the sanctity of my vagina or
the sanctity of my national boundaries
or the sanctity of my leaders or the sanctity
of each and every desire
that I know from my personal and idiosyncratic
and indisputably single and singular heart
I have been raped
be-
cause I have been wrong the wrong sex the wrong age
the wrong skin the wrong nose the wrong hair the
wrong need the wrong dream the wrong geographic
the wrong sartorial I
I have been the meaning of rape
I have been the problem everyone seeks to
eliminate by forced
penetration with or without the evidence of slime and/
but let this be unmistakable this poem
is not consent I do not consent
to my mother to my father to the teachers to
the F.B.I. to South Africa to Bedford-Stuy
to Park Avenue to American Airlines to the hardon
idlers on the corners to the sneaky creeps in
cars
I am not wrong: Wrong is not my name
My name is my own my own my own
and I can’t tell you who the hell set things up like this
but I can tell you that from now on my resistance
my simple and daily and nightly self-determination
may very well cost you your life

From Directed by Desire: The Collected Poems of June Jordan. Reprinted with the permission of the June M. Jordan Literary Estate Trust, and Copper Canyon Press.