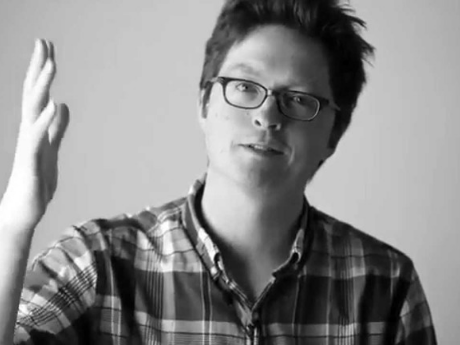 Here--you can wipe
your hands
on my apron

Sometimes the bed seems to be made entirely of skin

Onion and Egyptian
my legs, your
stomach

I'm having so much fun
trying to relax
around your fist

It's as if we're both standing on the wilder shore of
some immaculate kitchen, our towels folded neatly, into
bleached-white columns

I love your spine, chef

I love
your technique

Do you think there's a difference
for the Lord
between

slow dancing in the kitchen at night, no music, your arms around my neck, and later

my face
in your ass?

a peaceful night
a perfect death

I want to bow very low
all the way to the ground
actually lie down
my face pressed hard
against the tiles
my arms out, and bow
to your fingers
your parents who put you here
your legs
the backs of your knees
your mouth
your chin
how you smell
how you smell at night
bow to your voice
across the kitchen
crooning


From The End of the West (Copper Canyon Press, 2009). All rights reserved. Reprinted with the permission of the author.

I don't remember anything anyone said to me as a child. Not really. No words of wisdom passed down from one generation to the next. No life philosophies. No creeds, no warnings. My mother must have said something, but I don't remember what it could have been. What I do remember is the light in the kitchen, yellow. And the kitchen itself, also yellow. The light would enter that room broken up by the small magnolia tree, breaking now against the dark blond cupboards before falling across the yellow linoleum. It looked the way light looks on water. The dark leaves of the maple outside my bedroom window, brushing lightly against the roof at night. When it rained the leaves looked like they were made of leather. Thinking about that tree just now I can also hear the beginning of Franz Wright's poem "June Storm" in my own memory of that place:

Dark heartshaped green of childhood is what I hear in that. And more than hear it's what I see. This is how I remember the world, through images. The poet Paul Eluard said that "images think for him". And if they don't think for me, they are certainly doing the thinking in any poem I have ever written. Image first. No philosophies. Narrative does not dictate the image, the image dictates the narrative, as one of our great image makers, Charles Wright, says. Along those lines I want to look at a poem that does most of its thinking in images. The poem is called "For the Night" and it was written by Jane Kenyon:

The mare kicks
in her darkening stall, knocks
over a bucket.

The cow keeps a peaceful brain
behind her broad face.

Last light moves
through cracks in the wall,
over bales of hay.

And the bat lets
go of the rafters, falls
into black air.

One of the most striking things in this poem is the slow retreat of day into night, the light leaving the barn. Like Charles Wright said it is an image that tells us a story. That image, the light moving over the bales of hay in the darkening stall before turning into black air, moves time forward in the poem, as well as us. It dictates a kind of linear story: time passes. The other images, of the animals, also tell a story. It is a story that moves in an altogether different direction than the light. Instead of going forward, it goes, more or less, straight up. From the mundane and earth-driven knocking over of a bucket, to the peaceful brain of a passive cow, to the slow fall and flight through the black air of the bat, I want to see a very old narrative: from hell to purgatory to heaven; from darkening stall, to hay bale, to thin air. Is this possible? I hope so. From image to image to image this poem makes the world.

It is what I want most from poetry.