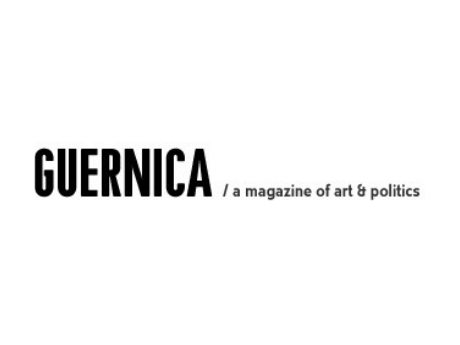 Tell me about the creation of Guernica. When and how and why was it conceived?

Stop me if you've heard this one before: Two friends walk into a bar named Guernica. It's true—founders Michael Archer and Joel Whitney once organized readings at their favorite watering hole, but soon outgrew this format. Along with Joshua Jones and Elizabeth Onusko, they decided to turn their increasingly popular events into a journal, so that the conversations emerging could be preserved. The bar name stuck since it spoke to their mission, exploring the intersection of art and politics. Guernica Magazine celebrates its ten-year anniversary this year.

What makes Guernica different from other places to encounter poetry (and literature, art, and politics) on the internet?

There are other notable websites that publish long-form journalism alongside interviews, poetry, fiction, and visual art, but we put equal emphasis on every section of the magazine. You don't have to hunt to find the latest poem or story. There's a bit of magic that happens with, say, an essay on satire in Egypt appearing next to a poem ending with the line "I would work myself into the dirt if I could stay." (That's from Elizabeth Metzger's "Courtyard of a Most Embarrassing God.") Every piece is made better by its neighbors.

I'm always excited about what's most recent, so I'll mention Tommy Pico's poem "Thems," currently appearing in our Class in America issue. We received so many great submissions on class, but this poem knocked my socks off. Pico captures a rural cadence and teenage anxiety with lines that are somehow both understated and precise:


So terror tallies shorter and shorter so Jacob says or
was it Mason? Maybe the names are more like Chunky and Young-
bird, Chuka, Limpy n them and I say "and them" and mean
how in "the sticks" where I lived, the reservation, the mail
boxes were like maypoles at the end of the Earth


What should someone submitting work to Guernica know about the site?

At a recent publishing conference hosted by the Asian American Writers' Workshop, our senior fiction editor Meakin Armstrong said, "From our point of view, it's marketable if you're unpublished. We can then claim you later." Funny and true. We believe in this project of bringing stories that aren't being told and voices that aren't being heard to our readers. Unlike editors at comparable sites, though, we're all volunteers. At the end of the day, we're not beholden to anyone and willing to take some risks. Have I told you about the time we got censored by Google?

Tell me about it!

We received something like a cease and desist letter after publishing Clancy Martin's essay "Early Sexual Experiences," guest-edited by Deb Olin Unferth. We were told to remove the piece or lose our AdSense program, one of the primary ways we paid for upkeep costs at the time. We stood by our author and editor, and while challenges ensued, we also laughed about the situation during meetings. Joel Whitney wrote an essay on fighting the robots for Boston Review.

What other literary sites, journals, or broadcasts, online or print, are your go-to?

I love this question, but there are so many. Memorious, Crazyhorse, From the Fishouse, Circumference, Virginia Quarterly Review, BOMB, Boston Review. I recently fell down the rabbit hole that is Blackbird. And I wish Explosion-Proof still existed.

* * *
Erica Wright became the poetry editor at Guernica in 2007. She is the author of the poetry collection Instructions for Killing the Jackal (Black Lawrence Press, 2011) and the novel The Red Chameleon (Pegasus Books, 2014).