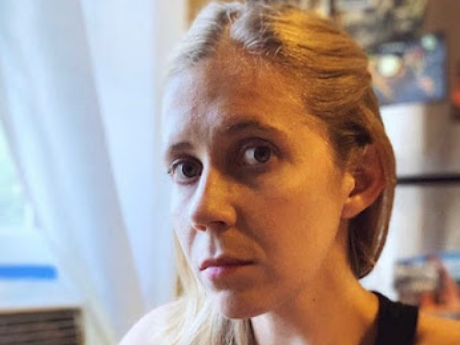 Tell me about the creation of Jellyfish. When and how and why was it conceived?

The very first issue of Jellyfish came out in the Spring of 2009. At that point I had these colliding interests in both poetry and web design, and I can see now that I was looking for two things. First, I was desperate for a way to scratch some sort of creative itch. Being a first-year MFA student at UMass Amherst, I was trying to negotiate who I was, creatively, in an academic program devoted to writing and language. What were some other ways poetry could be accessed, seen, communicated? The second is simply that I wanted to read poetry that was being written at the moment—from my friends, from as many people as I could. Writing is often such a lonely thing, and if we're not pointing back to it, it can be very easy to forget that things are being created all around you. I wanted freshness, I wanted vivacity, I wanted access, and I wanted to share this energy through the media I best understood (at the time, at least): website design.

A friend and I went to the Boston Aquarium one snowy January in this same year, where there was this big jellyfish exhibit. It was there for a while, and maybe still is. The big slogan of the exhibit was "Jelly doesn't mind!" (Actually a super depressing slogan, because it ended up being all about how jellyfish will eat anything they see, including all of the crap we throw into the ocean). But this slogan sort of stuck with me, and when thinking about the name for my magazine, I decided to pick Jellyfish because I wanted to be a magazine that "doesn't mind," a magazine of openness, of risk, of that moment in the poem where something breaks open.

What makes Jellyfish different from other places to read poetry (and literature) on the internet?

One of my favorite things about working on Jellyfish is that, with every issue, we start from scratch. I think of it almost as trying to rebuild the journal all over again, including the design. The layout of the magazine is always constructed based on whatever issue we come up with, content-wise. We also like to publish a variety of aesthetics, and aren't too concerned with "big names" in the poetry world. We like to champion writers who we love regardless of publishing record or recognition.

I also really value having a staff who are as close as we are (Anne Cecelia Holmes, Philip Muller, Kamden Hilliard, and Caroline Cabrera). I consider them my strongest allies, and I hope they consider me one of theirs. We trust more than simply each other's aesthetic choices, which then makes our trust in each other's aesthetic choices even more significant—if that makes sense. But what that means for us is that we are not at all afraid to fight for a poem that we think does something for us, even if someone else disagrees. We are all experienced editors, and we know we want to be able to publish poems that do something, not just what appeases an audience.

In the first question I talked about that moment in the poem when something "breaks," and that obviously means something different in every poem. But we published a poem in Issue 14 that I think really hits that sweet spot for me—one of Nicole Steinberg's "Fat Dreams" poems. The end of the poem goes like this:


& I am rattling too, inside
the distant parenthetical of ice cream
truck jingles, sugary specters that wait
& wait & wait & wait & circle & circle
& circle the block


I loved the rest of the poem, of course—there's this sense of confinement in the poem, of lists building up inside the given space of the form, which gives that confinement lots of urgency. But when I read it out loud for the first time, the way the end of the poem shudders—its broken loop, that keeps going just a little longer than we'd expect—it just gutted me. In another poem this repetition at the end might have been heavyhanded, or too precious, too clever. But here we have a kind of lurch, a stagger, that breaks us out of the poem, and it's perfect.

What should someone submitting work to Jellyfish know about the site?

That we are a loving group of editors who take our job seriously; we take great care to make sure that every editor reads every submission, and our conversations about poem submissions can go on for hours. Each issue is constructed as an issue—having a group staff, I think, helps to build a kind of resilient, curated issue. But what that means is, sometimes your poem may not be in the issue—and it doesn't mean we don't think you are a fantastic writer, or that your poem may not be in another issue further on down the line.

Also, that risk wins out. Not who you name-drop on your cover letter, not what you've published before or who your mentor was. Because we treat submissions with great care, we look at the risk that's being presented right in front of us.

And of course, the staple—read the magazine before submitting!

What other literary sites and journals, online or print, are your go-to?

The work that Sixth Finch has done, as both a journal and a chapbook press, is really extraordinary. I feel like they're a kind of family, a mag Jelly really looks up to. Interrupture, Nightblock, Powder Keg, Souvenir, and Birdfeast are all incredible in both design and content. We are also big fans of mags like The Wanderer and The Foundry. It can be easy for me to forget, sometimes, that there are so many different ways to "succeed" at being a poem, that the poem itself makes up the rules of being a poem, that each poem should be a risk unto itself—a contract between you and the poem—and these are just a few magazines that help remind me of this blessing.

***
Gale Marie Thompson is the author of Soldier On (Tupelo Press) and two chapbooks, Expeditions to the Polar Seas (Sixth Finch) and If You're a Bear, I'm a Bear (H_NGM_N). She is a PhD candidate at the University of Georgia and has received fellowships from the Vermont Studio Center and Kimmel Harding Center for the Arts. She is the founding editor of Jellyfish Magazine and lives, teaches, and writes in Athens, GA